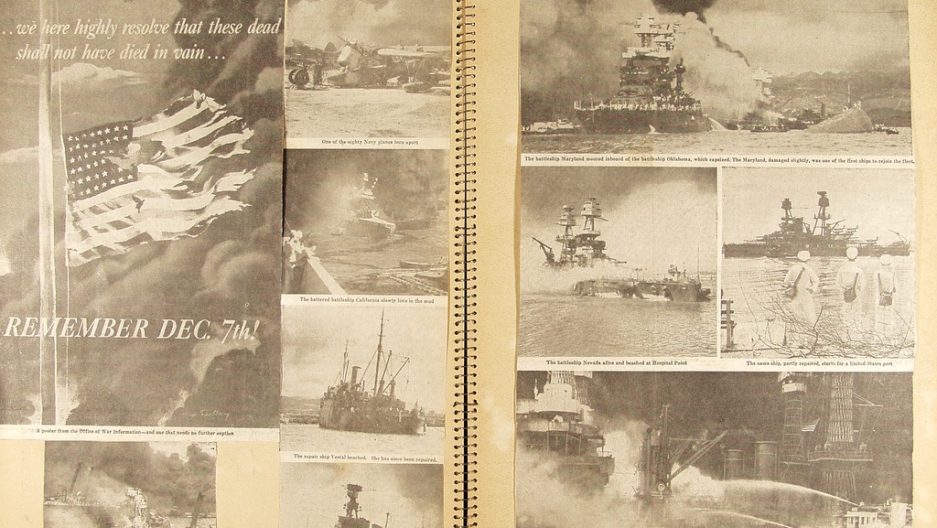 Newspaper clippings from the one-year anniversary of the bombing of Pearl Harbor. The book is titled, "Scrapbook: 1942, 1943, Book 8." but the newspapers where the clippings came from are unknown.

Courtesy of the Ikeda Family Collection/Densho

On December 7, 1941, the Japanese navy launched a surprise military attack against the United States naval base at Pearl Harbor, on the Hawaiian island of O’ahu. The attack not only brought America into World War II, but raised suspicions of citizens and immigrants of Japanese descent.

The full repercussions of the attack would not be known for months to come, but the immediate aftermath brought catastrophic changes for Japanese Americans who had built lives in Hawai’i and on the West Coast.

Nearly half of the civilians killed on Pearl Harbor day were Japanese American: a group of fishermen who had the misfortune to have been out at sea during the attack and approximately 35 on the ground who were killed by shrapnel and anti-aircraft shell fragments.

Grace Sugita Hawley who witnessed the attack from her home in Honolulu, remembers, “I saw the airplanes with the Japanese pilots. ... I was so scared, I ran into the house. And, so, that’s when our lives changed.” Later, her father was arrested for being Japanese and the family followed him to an incarceration camp on the mainland.

Other Hawai’i residents were impacted almost immediately. The Hawaii Territorial Guard, mobilized the morning of December 7 was largely made up of Nisei, the children of Japanese immigrants, from the University of Hawai’i ROTC. They were pressed into duty in very uncertain conditions, then just six weeks later were drummed out of the service because they were Japanese. After Pearl Harbor, Japanese Americans, American-born citizens, were declared "enemy aliens" and prohibited from entering the military. The students became the nucleus of the Varsity Victory Volunteers, which petitioned the military governor of the state to provide manual labor in support of the war effort instead.

In Hawai’i as on the mainland, within hours of the Pearl Harbor attack, without presenting any charges — and often with no warrants — the army, FBI and local police moved quickly to round up aliens and other individuals, mainly leaders of the Japanese community, who previously had been investigated and were suspected of being disloyal or dangerous in a war situation. These individuals were usually told they would be gone for a few hours, but many of them were detained for the entire war. 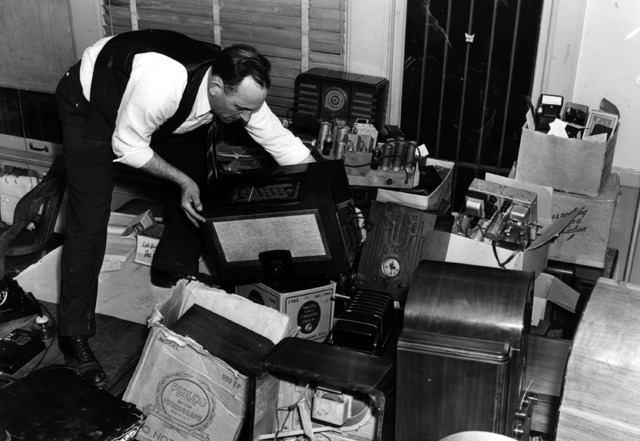 Shortly after the bombing of Pearl Harbor, Japanese Americans were ordered by government officials to surrender their cameras and radios, ostensibly to prevent their use in treasonable activities.

Courtesy of the Seattle Post-Intelligencer Collection, Museum of History & Industry.

For mainland Japanese Americans, it would be months before President Franklin D. Roosevelt would sign Executive Order 9066 resulting in the removal and mass incarceration of Japanese Americans. But the changes in attitudes and atmosphere were immediate. Japanese Americans recall a sudden awareness that teachers, friends and neighbors now viewed them with fear and suspicion. “Contraband” radios and cameras were confiscated and a curfew was quickly put into place.

The day of the attack, radio stations were broadcasting orders to the residents of O’ahu: “Do not use your telephone. The island is under enemy attack. Stay off the streets. Keep calm. ... In the event of an air raid, stay under cover.” Governor Joseph Poindexter came on the radio to proclaim a state of emergency, and, at 11:41 am, the army ordered all commercial radio stations off the air, fearing that Japanese planes could navigate by their signals during another attack. Later that day, the stations returned to the air to announce that Hawai’i was now under martial law. Martial law lasted, with some modifications, for nearly three years.

Young Lucy Fukui captured the prevailing mood in a school essay she later wrote at Minidoka concentration camp: “A painful memory lingers in the heart of many Niseis — a memory of those dark somber days of 1941, after the unexpected attack on Pearl Harbor.”

Akiko Kurose, who grew up in Seattle, Washington, says she suddenly became very aware of her Japanese ancestry and the threat others perceived in that identity. “When I went back to school that following morning, December 8, one of the teachers said, “You people bombed Pearl Harbor,” she recalls.

Tsuguo “Ike” Ikeda remembers having to attend a special assembly at school in Portland, Oregon, on the morning after the attack. “In reflecting back, I just felt that I wasn’t a citizen in this country. And that really made me angry and sad that I was deceived, you know, I wasn’t feeling like a citizen. The Bill of Rights was incidental because I was seen as a 'Jap,' just the same as the enemy.”

They also put together custodial detention lists, commonly called the ABC Lists, of those who would be arrested should war come. These lists allowed the government to begin rounding up what were now “enemy aliens” within hours after the attack on Pearl Harbor. For the most part, those apprehended were male immigrant community leaders who were suspect for the positions they held — heads of a Japanese Association branch or priests at Buddhist temples, for instance — rather than for anything they had specifically done.

Activist Yuri Kochiyama’s father was one of those arrested by the FBI on December 8. Though he had just returned home from the hospital and was sick in bed, he was forced to dress and then taken away without a word of explanation to his family.

“Suddenly for the first time, I felt something different,” said Yuri Kochiyama, who died earlier this year at the age of 93. “People won’t think of us as American even if we are.”

After the attack on Pearl Harbor, Terminal Island, a Japanese fishing village in the Port of Los Angeles, was seen as a major threat because of its proximity to a US Navy shipyard. The FBI initiated widespread arrest of leaders who were immigrants from Japan (Issei) and fishermen. Navy sailors searched their homes for contraband like radios, cameras, pictures of Japan, even kitchen knives. These Issei after all were in Category A — ”known dangerous” — of the FBI’s ABC Lists because the US government presumed the Issei, who were aliens ineligible for citizenship by law, would be more closely aligned to their mother country than the nation of their residence.

In the months following the Pearl Harbor attack, propaganda, fear, and bigotry created a climate in which all West coast Japanese Americans were viewed with suspicion. Seventy-four days later, Franklin Delano Roosevelt’s Executive Order 9066 would send 120,000 — two-thirds of whom were US citizens — to concentration camps for the duration of the war.

This story originally appeared at Densho and was written by their staff with excerpts from the Densho Encyclopedia, where you can find more information about the history of Japanese Americans. In particular, check out these entries: "December 7, 1941" by Kelli Y. Nakamura, "Martial Law in Hawaii" by Jane L. Scheiber and Harry N. Scheiber and "Terminal Island, California" by Lilian Takahashi Hoffecker.