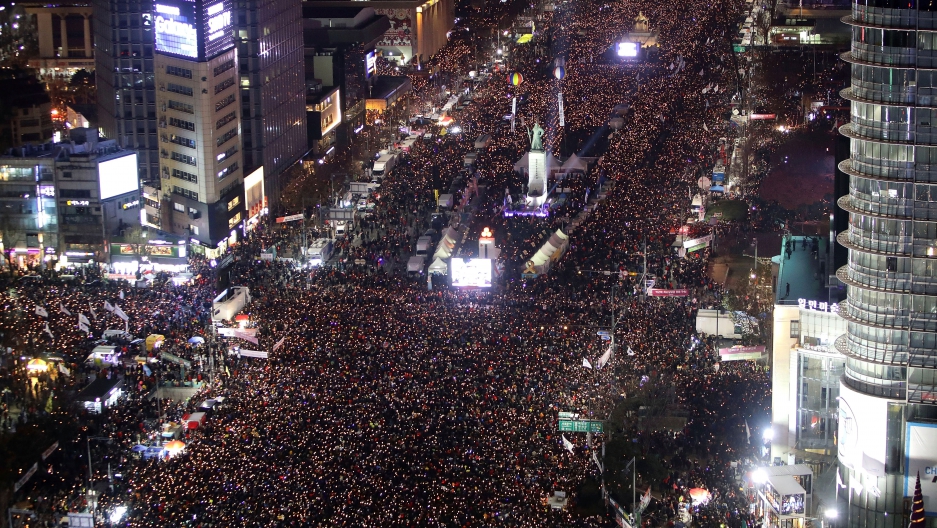 Protesters gather and occupy major streets in the city center for a rally against South Korean President Park Geun-hye in Seoul.

Saturday marked the the sixth-straight week protesters took to the streets to demand the ouster and arrest of South Korean President Park Geun-Hye.

Organisers of the candlelight rally in the South Korean capital said it was the biggest protest so far with a turnout of 1.6 million. Police put the number at 320,000.

The latest in a series of massive anti-Park demonstrations came just hours after opposition parties filed an impeachment motion that will be put to a vote by lawmakers on Friday.

Whether the motion is adopted or not, Park is firmly on course to become the first democratically-elected South Korean president not to complete a full, five-year term.

The 64-year-old stands accused of colluding with an old friend who has been formally indicted for attempted fraud and abuse of power.

Along with the now-normal slogans for Park to step down, there were growing calls at Saturday's rally for her to face criminal charges, arrest and imprisonment.

Dozens of life-size cardboard cut-outs of the president showed her wearing a jail uniform and bound by ropes. 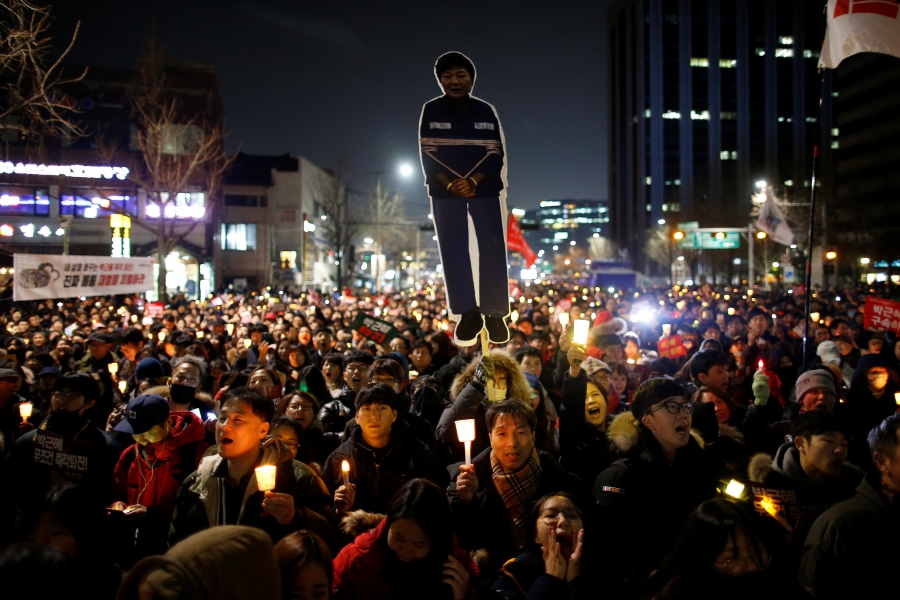 People march toward the Presidential Blue House during a protest calling for South Korean President Park Geun-hye to step down in central Seoul.

While the protestors want her out immediately, the political establishment is struggling to find a similar unity of purpose.

The impeachment motion introduced in the early hours of Saturday morning carried 171 signatures — accounting for every legislator from the three opposition parties and independents.

In order to secure the two-thirds majority required for impeachment in the 300-seat national assembly, it will need the support of more than two-dozen lawmakers from Park's ruling Saenuri Party.

Just a week ago, the backing of enough Saenuri rebels seemed assured, but a rather confused resignation offer by Park on Tuesday strengthened the hand of her loyalists who insist she be allowed to step down voluntarily.

The party has since proposed she resign in April — a timeline it justifies as more conducive to a calm and steady preparation for an early presidential election.

Observers say the Saenuri rebels are likely to fall in line with the proposal and vote against the motion on Friday.

The prospect of an April departure for Park will do little to assuage the public anger that has driven the mass street protests of recent weeks.

"I no longer believe a word the president or her party says," said bank employee Kim Hak-Won who was marching Saturday with his teenage daughter.

"How can we tell our children to respect the law when our own president refuses to do so?" Kim said.

And there was widespread anger with the Saenuri party over what were seen as its efforts to block the impeachment process.

"I am so full of rage right now, I could set fire to the party headquarters," said 30-year-old office worker Park Sung-Jin.

But even if impeachment were approved by the assembly on Friday, Park would likely remain in office for some considerable time.

An adopted motion would still require approval of the Constitutional Court — a process that could take up to six months.

Following a court order, police allowed the marchers within 100 meters of the complex housing Park's residence and offices.

As well as the huge crowd in Seoul, there were reports of large rallies elsewhere including 40,000 people in the southeast city of Daegu — considered a staunch Park stronghold.

The scandal that has engulfed Park and paralyzed her administration has focused on her friendship with long-time confidante Choi Soon-Sil.

Choi has been charged with meddling in state affairs and using her Blue House connections to force dozens of conglomerates to donate around $70 million to two foundations she controlled.

In a first for a sitting South Korean president, Park has been named a "suspect" by prosecutors investigating Choi.

As president, Park cannot be charged with a criminal offense except insurrection or treason, but she would lose that immunity once she steps down.