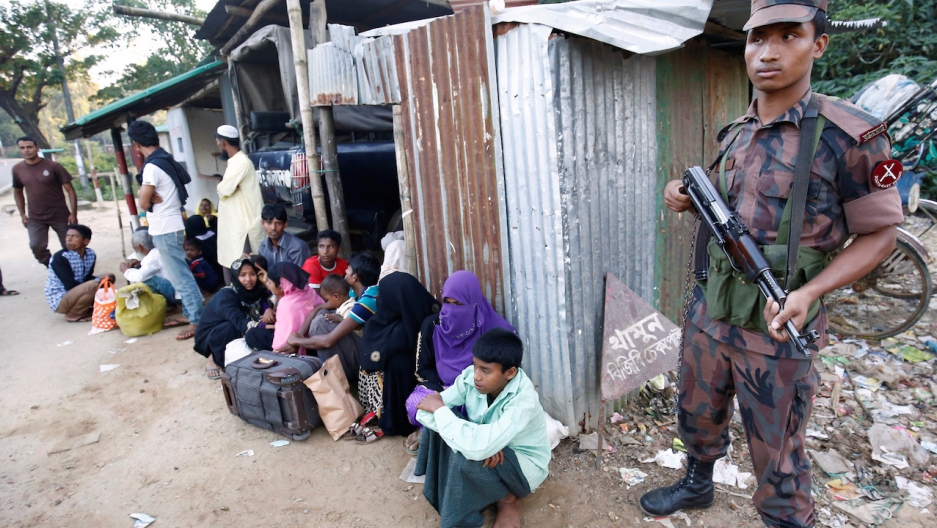 A security guard stands next to 38 Rohingya Muslims detained for illegally crossing the border in Cox’s Bazar, Bangladesh, Nov. 21, 2016.
Credit:

Myanmar is beset by “human fleas.”

This “morally bad” group of people are “loathe for their stench and for sucking our blood,” says the Global New Light of Myanmar. And the nation’s citizenry must “constantly be wary of the dangers of detestable human fleas.”

Comparisons to Nazism are cheap, especially in the social media era. But this op-ed stands out for, well, sounding remarkably similar to Third Reich propaganda.

“Sure, the Jew is also a human being,” wrote Joseph Goebbels, the future Nazi regime’s propaganda chief, in the late 1920s. “None of us has ever doubted that. But a flea is also an animal — albeit an unpleasant one … our duty is to make it harmless.”

This screed against “fleas” in Myanmar comes amid a violent crackdown along the nation’s marshy western coast. The targets? Rohingya Muslims, an ethnic minority numbering roughly 1 million.

They are widely hated in their own homeland. In recent years, about 10 percent of them have been driven into grim camps patrolled by armed guards.

Over the years, officials in Myanmar have called the Rohingya “ugly as ogres” and, more recently, too “dirty” for soldiers to rape. One political faction, with seats in parliament, has spoken warmly of Nazi pogroms and openly promotes “inhuman acts” to rid Rohingya from the nation.

A purge of sorts is now underway. Myanmar’s military is currently sweeping Rohingya villages to root out what the government calls “extremist” elements.

Indeed, a ragtag band of Rohingya militants — armed with sticks, blades and a few guns — emerged in October to attack soldiers and police. But the army has responded with overwhelming force.

Satellite images, commissioned by Human Rights Watch, suggest more than 1,000 buildings in Rohingya territory have been torched. The army, by its own admission, is pitting well-armed platoons against men wielding clubs.

Myanmar can close off Rakhine to outsiders, but they can't stop these heart breaking @AFP images coming out of Bangladesh. Truth will out pic.twitter.com/N9PTnYUxlR

According to the United Nations, at least 30,000 have fled this crackdown toward neighboring Bangladesh.

Is this footage legit? If so, is the army culpable? These questions might be answerable if the government hadn’t declared much of the conflict zone off limits to outside observers — namely journalists and aid workers. Instead, the military prefers to control the terrain and thus maintain a stranglehold on information.

Meanwhile, Rohingya are escaping en masse toward Bangladesh. According to many government officials — including those surrounding Aung San Suu Kyi — that is where they belong.

“They haven’t got many chances here either,” says Ko Ko Linn, an activist based in Bangladesh with the Arakan Rohingya National Organisation, or ARNO. He contends that “this is no place to take shelter. If you reach the border, you get pushed back. So how can they survive?”

As for the alleged jihadis hunted down by Myanmar’s army? They are nothing more than “local youth, homegrown youth, who find persecution unbearable,” Ko Ko Linn says. “You can’t call them jihadis.”

ARNO, among the few international Rohingya-run rights organizations, has been condemned as a pro-militant group by Myanmar’s government. Officials have repeatedly alleged that “foreign terrorist organizations” have nurtured extremism within Rohingya villages. Even the Western media have played along by stoking fears of the Islamic State’s imminent rise in Myanmar.

For sure, al-Qaeda, the Taliban and the Islamic State have made weak overtures toward the tormented Rohingya. But despite years of fretting over a great jihadi uprising in the Rohingya’s homeland, this menace has yet to manifest on any serious scale.

Videos posted online, in which Rohingya militants vow jihad, show a gang of men holding fewer than a dozen rifles — a weapons cache exceeded by many American biker gangs.

These rebels are hardly impressive. They appear to have fared miserably in conflicts with Myanmar’s army. Official reports describe villagers with knives charging at soldiers — and getting mowed down by the dozens.

As the purge drags on, tens of thousands of Rohingya are made to suffer for the crimes of this tiny band of fighters. The military’s guns-blazing raids in Rohingya terrain amount to “collective punishment,” according to John McKissick of the United Nations Refugee Agency.

Worse yet, he told the BBC, the army has a bigger goal: “ethnic cleansing,” a potent phrase coming from the United Nations, which typically favors dry diplomatic language.

Allowing the Rohingya to surge into Bangladesh, he says, would encourage Myanmar’s army to “continue the atrocities and push them out until they have achieved their ultimate goal of ethnic cleansing of the Muslim minority in Myanmar.”