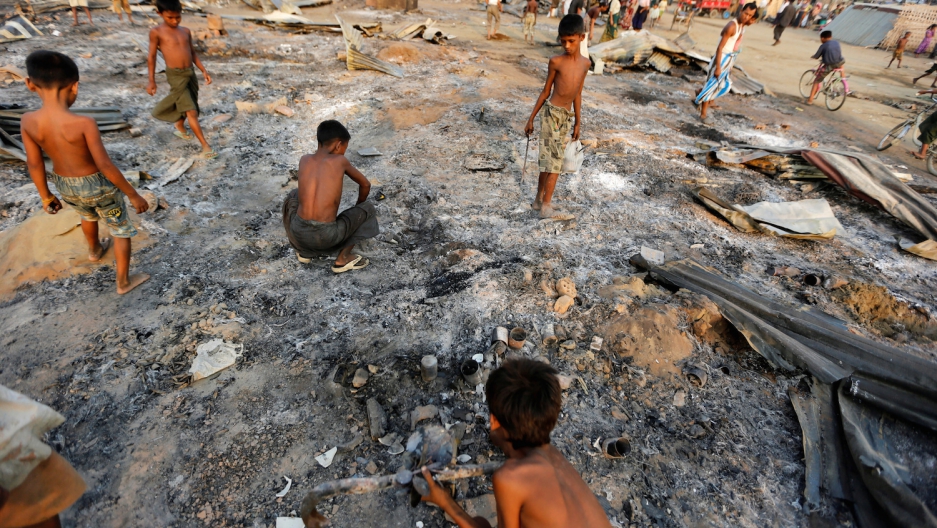 Boys search for useful items among the ashes after fire destroyed shelters at a camp for internally displaced Rohingya Muslims in the western Rakhine State near Sittwe, Myanmar, on May 3, 2016.

Islamist radicals around the world have long goaded the Rohingya to channel their rage into a bloody resistance.

This is hardly surprising. When it comes to the Rohingya — one of the world’s most tormented Muslim groups — there is plenty of anger to go around.

But never mind extremists. Anyone with a conscience will be outraged by the Rohingya’s plight. They have been herded into grubby camps, lorded over by troops and subjected to 21st-century apartheid. Rescuing the Rohingya is a cause célèbre for rights groups, Hollywood stars and the United Nations.

But it’s also a call to arms for jihadis. Al-Qaeda beckons the Rohingya to help form a caliphate. The Pakistani Taliban urges them to “take up the sword.”

For years, these appeals have gone largely ignored. This month, however, jihadis may feel they’re finally getting their wish.

A mysterious faction armed with guns, sticks and machetes has suddenly emerged in Myanmar’s Rakhine State, the Rohingya homeland.

The group may include 500 to 800 fighters. Their attacks on police outposts, impressively coordinated across multiple districts, have killed nine officers. The attackers have also looted dozens of guns and more than 6,500 bullets — precious plunder to a poorly armed group likely plotting more attacks.

Their exact motives are murky. But these strikes appear timed with the release of an online video, recorded in a jungle clearing, featuring a dozen or so gun-toting men. Their presumed leader, speaking the Rohingya tongue, calls for armed Islamic uprising.

This talk of revolution may nurture the blood-soaked fantasies of jihadis around the world. But they will be some of the only winners in this conflict. Most of the losses will be borne by everyday Rohingya.

Myanmar’s government (namely its military) has a history of seeking excuses to forcefully suppress the Rohingya, who number more than 1 million people. Past claims of Rohingya radicalism have been flimsy. Now, in the wake of genuine insurgent strikes, the authorities feel they have a license to go hard — and they are wasting no time using it.

The government has announced “full strength” operations to take out suspected insurgents. So far, more than 40 are dead, mostly men accused of militancy by the government. 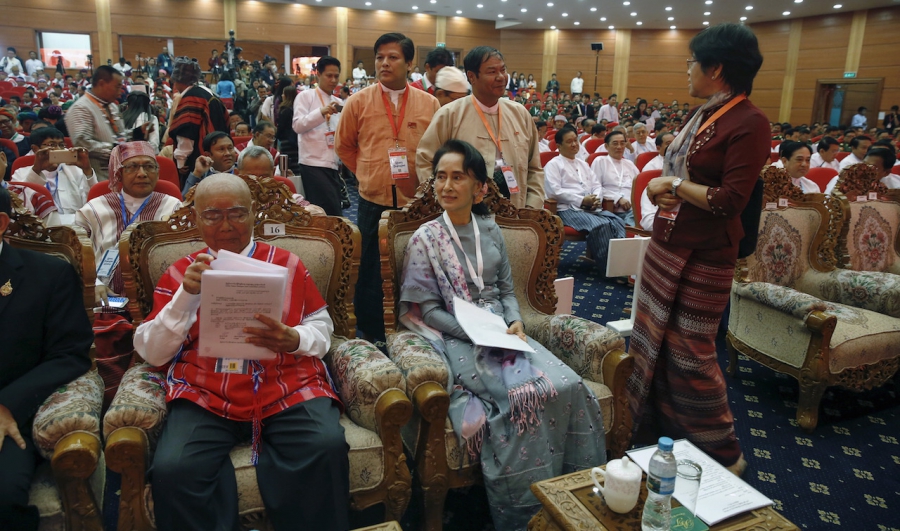 Back in January, Myanmar's Aung San Suu Kyi smiled before giving a speech during talks between the government, army and representatives of ethnic armed groups. The parties were meeting in Naypyitaw to discuss a ceasefire to end insurgencies.

Army units are “frequently coming into armed contact with the attackers,” according to the president’s office. This new movement, officials warn, is “intended to promote extremist violent ideology among the majority Muslim population.”

Officials say the insurgents’ strikes were “assisted by foreign funding and the support of members of foreign terrorist organizations” — namely the Pakistani Taliban and extremists in the Middle East. They’ve since softened these claims.

But that won’t stop hyper-nationalist Buddhist monks from agitating for a more forceful purge of the Rohingya.

Read more: How Myanmar’s government is making violence between Muslims and Buddhists worse

Along with foreign jihadis, popular anti-Muslim monks are the other winners in this crisis. For years, they've riled up a large following with conspiracy theories about a looming Muslim takeover of Myanmar. Believers include top-ranking officials with the power to intensify crackdowns on Rohingya villages.

The latest conflict lends a ring of truth to their theories, however illegitimate.

In the eyes of many officials, the Rohingya are “invaders” from Bangladesh. Even Myanmar’s de facto leader Aung San Suu Kyi, a Nobel Peace laureate long hailed as a friend to the downtrodden, has done little to challenge this view.

But Rohingya have deep roots in Myanmar, namely in impoverished lands adjoining Bangladesh. Access to this terrain is strictly controlled by army checkpoints. The government seeks to quarantine Rohingya inside their homeland while keeping away prying outsiders.

The army’s ongoing sweep of Rakhine has already produced some disturbing images. Amateur videos posted online appear to show Rohingya settlements torched in an effort to smoke out militants.

The fighting has also tightened the state’s stranglehold on Rohingya camps, open-air ghettos where more than 140,000 scrape by. Living under strict rules, they lack the freedom to freely travel in search of jobs or medicine.

Nothing suggests the average Rohingya person welcomes gun-toting jihadi liberators. According to Richard Horsey, an International Crisis Group analyst, there is “a long-standing sense among much of the Rohingya population and many religious leaders that violence would be counterproductive.”

In fact, while practically every other major ethnic group in Myanmar spawned an armed resistance wing decades ago, the Rohingya are an exception. It is perhaps no coincidence that they are also the most deeply abused.

In recent years, more than 100,000 have been driven from their homes and into squalid camps. These purges have been led by local Buddhist hard-liners and abetted by state security forces. Those who’ve evaded camps are still suppressed by laws that restrict their travel and seek to limit the size of their families.

As a recent report by Physicians for Human Rights puts it: “Rohingya face such a systematic denial of rights that it pervades nearly every aspect of daily life.”

Outside Myanmar, small-but-dedicated numbers of foreign jihadis may be eager to prop up any Islamic rebellion there. In Indonesia, the world’s largest Muslim-majority nation, extremists have hoped to aid a Rohingya rebellion for years.

Sidney Jones, among the top experts on Southeast Asian terrorism, has previously warned that if “there was ever an extremist operation that Indonesian jihadis could join in Myanmar, they would be off like a flash.”

But if this new insurgent cell endures, it will hardly be the only guerrilla faction in the nation. From its frosty mountain peaks to its balmy shores, Myanmar is filled with dozens of armed militias — so many that even experts struggle to remember all of their names.

As troops pursue Rohingya insurgents, the army will have great power to shape the story presented to the outside world.

If there are serious abuses, a counternarrative may be cobbled together with mobile phone videos recorded by the Rohingya themselves. The footage uploaded so far hints at the military’s heavy hand.

Such recording devices remain relatively rare, however, in camps where many live in squalor.

According to Penny Green, a professor with the International State Crime Initiative, the Rohingya’s homeland is an “information black hole” where “allegations of human rights violations are difficult or impossible to verify.”