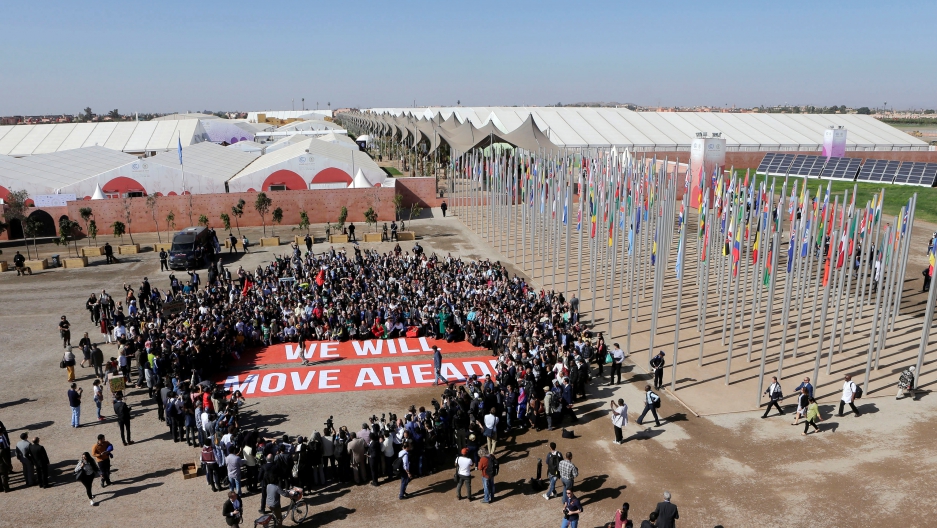 Climate activists protest outside this month's UN Climate Change Conference in Marrakech. Activists and officials are struggling to find a way forward for last year's landmark Paris Agreement on climate change after the US presidential election.

The US delegation was heading into the UN climate summit two weeks ago as rock stars to many of the attendees gathering in Marrakech, Morocco. After all, it was the US that paired up with China to push through last year’s historic Paris Agreement after decades of failure to act decisively.

Instead, though, the delegation was left at a loss for words about what’s next after the surprise election of climate change denier, Donald Trump, for US president.

“You know I just can’t speculate, I can only tell you what is right now. And, umm, and you know, that’ll be for, for the future to answer,” was pretty much all US Undersecretary of State Catherine Novelli could muster when peppered with questions at a briefing about what might happen to the overall climate fight under Trump.

The US is the world’s second biggest current carbon emitter and biggest historic emitter. It’s also the world’s biggest economy and was poised to play a major role in making the Paris Agreement work, with the goal of holding the rise in global temperatures to less than one more degree Celsius, or below 2 degrees Celsius over preindustrial levels.

But Trump has called climate change a hoax and has promised to pull the US out of the agreement.

So is it game over for a US role in battling the climate crisis, at least for the next four years?

Not necessarily, said many people at the Marrakech conference. Even if the federal government puts on the brakes, they say momentum will continue elsewhere.

Like many of the conference attendees, Ban thinks cities like New York, Los Angeles and Philadelphia, and states like California, will continue to carry the climate torch, no matter what Trump does.

“They are moving forward because consumers are demanding it, people are demanding it,” Ban said. “They know that this going toward low carbon economy, that’s the answer for their business future.”

California, in particular, has been a leader in emissions reductions and climate change planning for years. The state sent five people to the Marrakech talks, including Ken Alex, a senior advisor to Governor Jerry Brown.

“There are many opportunities,” Alex said in explaining his state’s determination to push on. And Alex said it’s not just about climate per se. “Honestly, a lot of it is economic for California. It’s good for trade.”

Some in Marrakech were hoping that if the US does withdraw from the Paris deal, big states like California could still actually help meet at least some of the emissions cuts promised by the Obama administration.

“Those jurisdictions, rather than falling back because of what happened in the election, they’re actually going to become more aggressive,” said Robert Stavins of Harvard’s Kennedy School.

Stavins says places like California, Washington, Oregon and the Northeast states won't be able to make up for an overall federal policy, but they can at least help keep the Paris process alive.

“If their actions could be recognized within the structure of the Paris climate agreement, that’s going to be more than a placeholder for the United States. That could prevent that unraveling that is such a risk,” Stavins said.

The beauty of the Paris Agreement is its flexibility and its potential to recognize contributions of governments below the national level, says former Spanish negotiator Teresa Ribiera, who now runs a climate change think tank in Paris.

“Formally, they will not be a signatory part of the agreement,” Ribiera said, but “they will find places to cooperate and be part of the solutions that are going to be built.”

Ribiera says this is not the ideal solution to the sudden uncertainty around the Paris Agreement. But if Trump pulls the US out of the deal, it might at least provide some glue to help hold the process together.

Susan Phillips's reporting from the Marrakech climate summit is supported by the International Reporting Project.

Related: Will Trump bring a U-turn on climate policy? Probably, but ...

Can Trump be reached on climate by talking with him about other things? Maybe ...

World climate activists to US: Please don't be a 'rogue state' under Trump