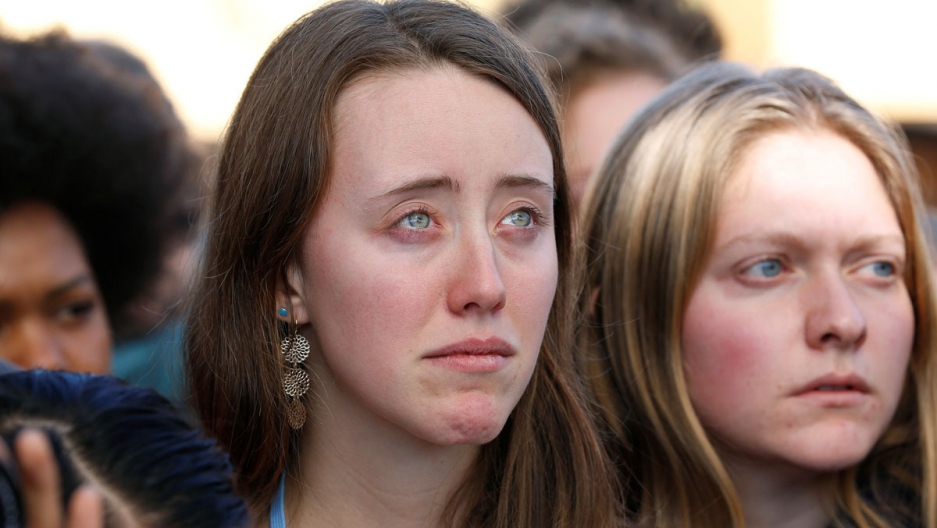 Youth supporters of Hillary Clinton mourn the election of Donald Trump during the World Climate Change Conference 2016 in Marrakech, Morocco.

In the day-after evaluations of the whys and whats of Donald Trump’s stunning presidential election victory in the US, one topic that's barely warranted a mention is climate change.

But Trump’s election could have far-reaching effects on the world's efforts to address the climate crisis.

The impacts of climate change continue to grow by the day. A new global climate agreement to try to prevent truly catastrophic global warming went into effect just last week. And thousands of people are gathering in Morocco this week to start figuring out how to make that aspirational new agreement actually work.

But on Jan. 20, we'll have a US president who has repeatedly claimed that climate change is a hoax — a huge change that will almost certainly make responding to the climate challenge even harder.

The Paris Agreement was the result of excruciating negotiations that literally went on for decades, even as the actual problems associated with climate change really picked up steam. It only finally happened because of some extremely heavy lifting by the Obama administration and by the president himself. And it's built on strong leadership from the US, which is the largest historic emitter of climate-warming greenhouse gases.

But Obama’s newly chosen successor has promised to pull the US out of the deal.

He can’t do it right away. There's a built-in lag time for any country to pull out, so it could be several years before a Trump administration could actually extricate itself. But there’s a lot that the US can do — or more likely not do — in the meantime.

It can refuse to engage. It can stay away from meetings. It can not file the required plans and targets for cutting emissions. And most importantly, it can refuse to contribute its share of the money that will be needed to really make the agreement work, especially when it comes to helping the world's poorest and most vulnerable countries deal with the impacts of climate change.

And those possibilities are causing real angst at the UN meeting in Morocco.

“We are in deep concern,” says Chinese activist Li Shuo. “What happened in Washington doesn't stay in Washington, and I think it will have profound implication to US-China relationship as well. Climate change is now a geopolitical issue in the most important bilateral relationships in the world.”

China is now the largest climate polluter, and was the pivotal partner with the US in making the Paris deal happen. The country is also already suffering severe impacts from climate change. But the concern for the future of the accord and broader climate action also comes from many of the world’s poorest and most vulnerable countries.

This morning, Lina Yassin, an 18-year-old student from Sudan who's attending the climate conference as a youth observer, made a plea to the president-elect:

“Try to think before you make any decision,” Yassin says. “Because a lot of lives are relying on this. You might not be affected by climate change, you might not see the impacts in your daily life. But trust me, millions are dying every year because of this. So please think.”

The climate policy decisions Trump must think about also include many here at home in the US.

Obama made climate a signature issue of his second term and has instituted a range of domestic programs and policies to try to chip away at the US’ carbon emissions.

Top of the list is the Clean Power Plan, which would require power providers to significantly decrease their emissions, effectively squeezing out a lot of old and new coal-fired power plants.

The plan is one of the Obama policies that most incensed many of Trump's strongest supporters, and Trump himself has railed against it. It’s been held up in court and could end up before a Supreme Court that likely will contain a new Trump-appointed justice.

But the outcome of that case would be uncertain even with a Trump appointee. So the new president could avoid it entirely by pulling the plug on the plan directly.

Trump has also skewered the Environmental Protection Agency, which would oversee the power plan and other climate efforts, including fuel economy and emissions standards for vehicles, for what he calls regulatory overreach.

And he’s famously promised to revive the American coal industry, a major source of the dirtiest carbon-based fuel, which has been in steep decline.

On this, at least, whatever Trump may try to do may well prove to be a dead end. Coal is in trouble for a host of reasons, even without the Clean Power Plan and the full force of the Paris Agreement. Cheap fracked natural gas has flooded onto the market. The cost of renewables is plunging and investments are soaring. And the pressures of climate change are forcing countries everywhere to find other alternatives.

Coal is far from dead, but the world is already pivoting away from it. It’s a hard blow to coal country, but it's pretty likely most of those jobs just aren't coming back.

Of course, no one actually knows yet what a Trump administration will do, on climate policy or anything else. Trump has never held public office, so has no policy record to point to. What he does have is a long record of contradictory statements on a host of issues over the years, even in the presidential campaign.

So stay tuned. Whatever you think of the man and his promises, he’ll soon be making more news — and more consequential decisions — than ever. And on climate, the impact of those decisions will be felt for decades to come.

With reporting help in Marrakech from Sarah Kimani of the South Africa Broadcasting Corporation and Justine Calma of the GroundTruth Project.