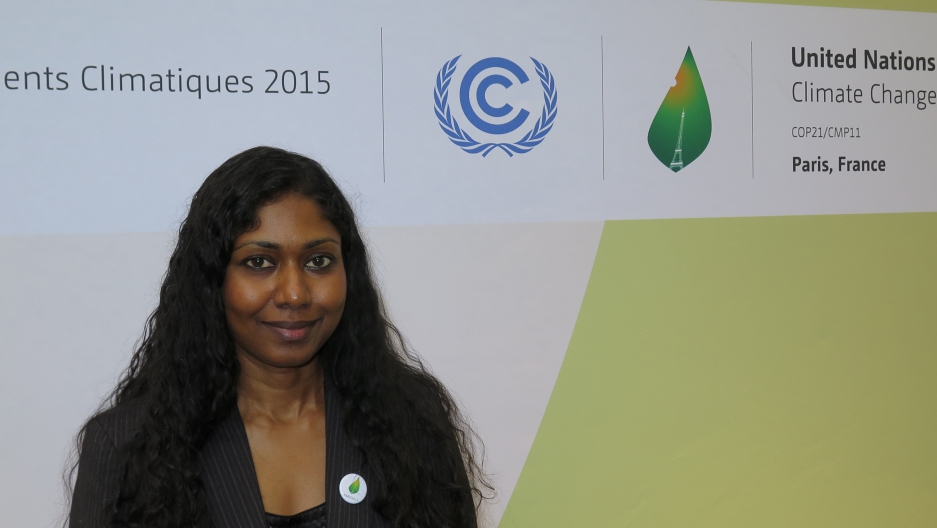 Former Maldives deputy UN ambassador, Thilmeeza Hussain, is pictured here at the global climate conference in Paris in December 2015, just before the adoption of the landmark Paris Agreement.

President-elect Donald Trump has yet to name his picks for the top environment and energy posts in his new administration, but all signs are that he'll tap people dedicated to rolling back many of President Barack Obama's initiatives, especially on the climate crisis.

That’s no surprise. Trump ran as a fierce critic of environmental regulation and the new global climate agreement. The Obama administration helped broker the plan, which went into effect earlier this month.

All that has climate activists gathered at this month’s UN climate conference in Marrakech concerned — but also determined to fight back.

Among them is Thilmeeza Hussain. She's from the tiny, low-lying island nation of the Maldives, which is slowly being inundated by the rising waters of the Indian Ocean. She's also part of an international activist group, Climate Wise Women.

Hussain says activists at the climate summit are upset but energized.

“Various civil society groups have been organizing and calling for bold action for the US not to pull out of the Paris Agreement,” she says. “Also, quite frankly, they’ve told the US not to be a rogue state. But when you have a climate skeptic elected into office in one of the most powerful countries in the world, it does not send a very reassuring message.”

Hussain knows something about rogue states. She served as the Maldives’ deputy ambassador to the UN under former President Mohamed Nasheed, who was overthrown in 2012 after becoming the only democratically elected president in the country’s history.

And she knows that Trump’s ascendance to the White House will make activists’ work harder.

The Paris Agreement last December was preceded by a growing wave of climate activism, which didn’t stop once the unprecedented deal was signed.

“People knew this was not enough, and we know the urgency of the situation,” Hussain says. Now, she says, they’ll have to ramp up the fight even more.

“What we need to do more is just get out on the streets … face the oil companies that are running the agenda,” she says. She’s heartened that this is already happening with protests against such things as the Dakota Access Pipeline in North Dakota and Canada's tar sands.

But, she says, “we need more people to get involved and be more aggressive about it. There’s only 350 gigatons of carbon budget left for the entire planet, and if we continue business as usual, we will consume the entire budget in the next five years."

Hussain says she’s heartened by the efforts of some business leaders to cut emissions and push political leaders, including this week’s appeal to Trump by dozens of US companies not to abandon the Paris deal. But she says what’s most important is the industry that’s not shifting fast enough on climate.

“We need to fight the oil companies, the fossil fuel industry, that is influencing the political process,” Hussain says. “A lot of our politicians are in their pockets. And that’s one of the reasons why the subsidies for the fossil fuel industry continue, and governments all around the world are giving permits to open up new coal plants.”

And Hussain says the fight will have to pick up especially in her adopted country of the US, where she stayed amid the unsettled political environment back home in the Maldives after President Nasheed’s ouster.

“We need to put pressure on the new administration and talk some sense into their heads. … Because when somebody says ‘I don’t believe in climate change,’ it feels like somebody is saying, ‘I don’t believe the earth is round, it’s flat.’ It’s just that stupid.”

Related: Can Trump be reached on climate by talking with him about other things? Maybe...