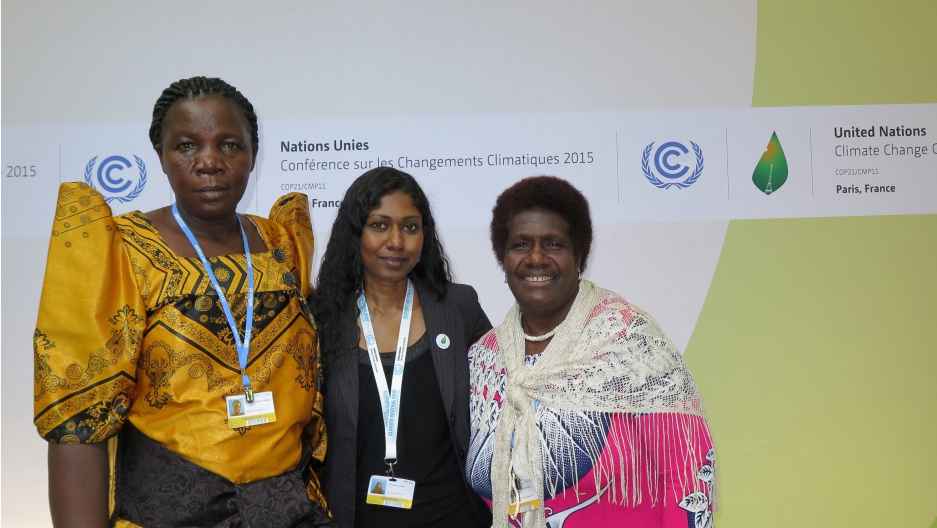 Constance Okollet, Thilmeeza Hussain and Ursula Rakova have observer status at the UN climate change summit this week in Paris as part of the organization Climate Wise Women. They are appealing to national leaders here to listen to the voices of the people who are most affected by climate change.

Constance Okollet is an imposing woman. She’s a peasant farmer from Uganda. Nearly six feet tall, with a stern but not unsmiling face with sad eyes.

Not at all surprising given the tales she has to tell.

“We are facing impacts of climate change, the worst part of it,” Okollet says, sitting in a small apartment she’s staying in this week in Paris. “We have floods, we have long term droughts and we have famine.

“In the past we used to have our two seasons. But these days we don’t have that. It’s just a gamble.”

PRI Climate Change: The latest news, analysis and voices on the global climate crisis, including dispatches from our team at this month's pivotal UN climate summit in Paris.

But Okollet isn’t just sitting around worrying. She helps run a network of local groups that have come together to speak as one on climate impacts in her region. And she’s part of a small network of women from around the world who bring stories about the effects of climate change to people who need to hear them.

They call themselves Climate Wise Women, and this week, the people who they say need to hear them are the national leaders assembled here in Paris for COP21 — the latest high-stakes global climate summit.

“Our people are losing their homes,” says Okollet’s friend Thilmeeza Hussain. She’s from the Maldives, a group of tiny, low-lying Islands south of India, where the water is rising fast.

Hussain cuts a stark contrast to her friend Constance. She wears the stylish black suit of a New Yorker, someone who served as her country’s deputy ambassador to the UN in the government of former Maldives president Mohamed Nasheed and has stayed there since Nasheed — the only democratically-elected president in the country’s history — was overthrown in 2012 and the political environment at home turned unfriendly.

Hussain is voluntarily displaced from her home these days. But she says others there have no choice.

“We live in very close proximity to the ocean, so the people who are living closest to the ocean are losing their homes,” she reiterates. The fresh water is being contaminated by salt water intrusion. It’s becoming harder to grow food.

And in the Maldives, there’s nowhere to run from rising seas. The highest point in the country is barely eight feet above sea level. The average elevation is about four feet.

But don’t talk to her about people leaving en masse. Hussain says her roughly 400-thousand countrymen are determined to stay put.

“Our goal is to ensure the survival of everyone… That is non-negotiable as far as we are concerned. We shouldn’t be forced to leave our country because of inaction of other people.”

But for a third member of Climate Wise Women, it’s already too late.

“My community have moved since 2009,” Ursula Rakova tells me. She’s from the Carteret Islands, in the far-flung eastern reaches of Papua New Guinea. And seven years ago, her family and a small group of others decamped to bigger Bougainville Island when their homeland finally became uninhabitable.

“Forty to 50 years ago, (our) islands were a place where it was peaceful,” Rakova says. But over the last 20 to 30 years, she says, “things have changed. We have lost more than 40 to 50 meters of our land. Our shorelines are eroding fast. We actually cannot grow a lot of food crops anymore because the soil is salinated. And this is why we have to move.”

Rakova has the kind smile of someone who knows that whatever’s happened to her, there are others who are worse off. But a lot has happened to her and her community. And their story isn’t over. That’s why she’s here in Paris.

“The leaders of the United Nations countries meeting (here) need to listen to the voices of the small people, because they are the most affected,” Rakova says. “What’s going to happen if 6,000 people from Bougainville in Papua New Guinea are suddenly being washed away because the king tide has come in and has swept them? And if they have to move, finance must be readily available to support this.”

“The negotiators need to put a human face on what is going on,” Thilmeeza Hussain says. She thinks many of the diplomats here in Paris, and their bosses back home, have lost touch with the realities of climate change.

“I think we should put images of people who are dying on those big screens in the negotiation rooms so they can have a human face,” Hussain says. “And then (can they) sit there and negotiate and put brackets around 1.5 degrees Celsius as a long-term objective and say we don’t care even these lives are lost?

“We need to ask the question, ‘how many lives need to be sacrificed before you will take bold action?’”

Like her colleagues Hussain and Rakova, Okollet has no more patience for this decades-long diplomatic process.

“We need funds to sustain our communities,” Okollet says.

Any hint of a smile on her face is gone.

“We need the pollution being reduced, so that we can get our normal weather patterns. We need people to live. When will the talking end?”