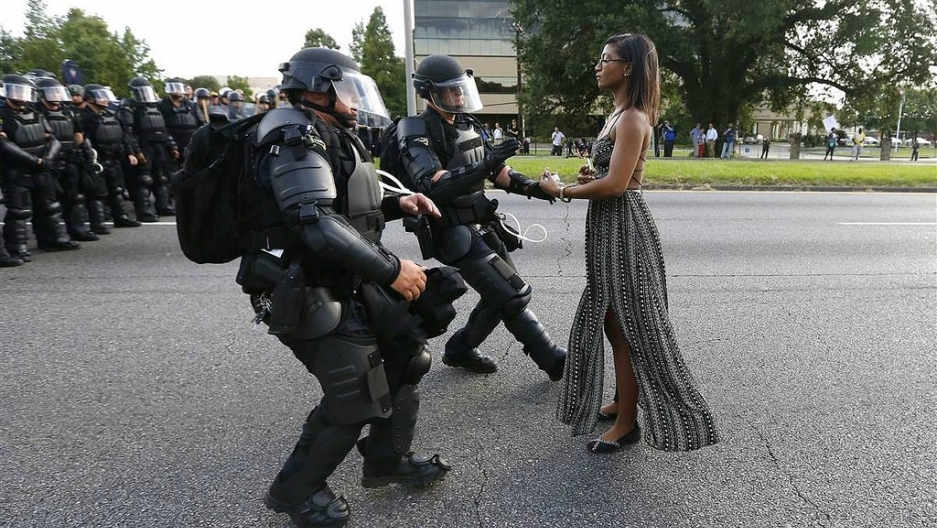 On July 9, 2016, Ieshia Evans, a nurse from Pennsylvania, decided to join hundreds of protestors gathering that weekend in Baton Rouge, Louisiana. After the death of Alton Sterling, people throughout the city demanded justice not just for Sterling, but also for the well-documented cases of minorities who were killed by police. While gathered in front of police headquarters, officers began to push protesters out of the streets. Ieshia, who wore a long, billowy dress, defied police and walked into the street, and stood steadfast. When two police officers in full riot gear rushed toward her,Jonathan Bachman --- a freelance photographer for Reuters --- captured this tableau, which has been called an instant iconic image.

Mark Speltz, an historian from Madison, Wisconsin, has studied civil rights photos of the 1960s, and is fascinated by this one. "There's so much information to read, and wonder about," Speltz says. "The juxtaposition of heavily armored and armed versus unarmed is very powerful, and this just makes it visible."

But Ieshia Evans, the subject of the photo who gained so much notoriety, thinks it has its limitations. "It's safe," Ieshia says. "It is the color book version of the truth."

Is it strange to say love is alanguage
Few practice, but all, or near all speak?

Even the men in black armor, the ones
Jangling handcuffs and keys,what else

Love: naked almost in the everlastingstreet,
Skirt lifted by a different kind of breeze