Anti-pipeline demonstrators conduct a march and prayer circle near North Dakota's Standing Rock Reservation in October 2016. The pipeline would cross historic Native land and pass under the Missouri River, the source of the local water supply.

It started last April with two people from the Standing Rock Sioux Reservation in North Dakota praying in a teepee for others to come and help fight an oil pipeline they believed would threaten their land and water.

And come they did — climate activists, social justice groups, Black Lives Matter, Native people from around the world and just down the road. Today the flags of nearly 300 tribes fly over a protest camp called Seven Council Fires, the epicenter of the growing fight over the Dakota Access oil pipeline.

People here at the edge of the Standing Rock Reservation say the effort to stop the pipeline is the first time the Great Sioux Nation has fought as one since the 1876 Battle of Little Bighorn.

There are “thousands and thousands of people” at the camp, said Linda Black Elk, an ethnobotanist and professor at Sitting Bull College at Standing Rock. “It’s like a large, happy city. … There are so many elders who, you just hear them say over and over they're just so thankful that they've lived long enough to see this moment in history.”

Their collective target is a nearly $4 billion pipeline that would carry oil from North Dakota’s Bakken fields to Illinois, with a capacity to transport as much as 570,000 barrels of oil a day.

All that oil could have a big impact on the climate — “it would increase emissions by the equivalent of 29.5 new coal-fired power plants,” said Kandi Mossett of the Indigenous Environmental Network — but for Native people here the fight is mainly about protecting sacred sites and the water of the Missouri River. Black Elk points out the pipeline is only being routed next to the reservation because the residents of the state capital didn’t want it near them.

“The city council of Bismarck and other people stood up and said, ‘No, we don't want this pipeline to cross the Missouri north of Bismarck, that's going to mess with our water supply,’” Black Elk says. “So they decided that putting it just north of the Standing Rock Reservation was OK. And they absolutely expected us to not care. They think that we are quiet, drunk, poor, Native people who are just going to kind of put up with anything that they throw at us. But they were wrong.”

That determination led to last week’s clash after protesters shouting chants — including “America’s built on stolen land!” — set up a second encampment directly in the path of the pipeline, on lands granted the Sioux Nation in an 1851 treaty but later taken away.

They called it their treaty stronghold camp, but it brought an angry confrontation with local police. 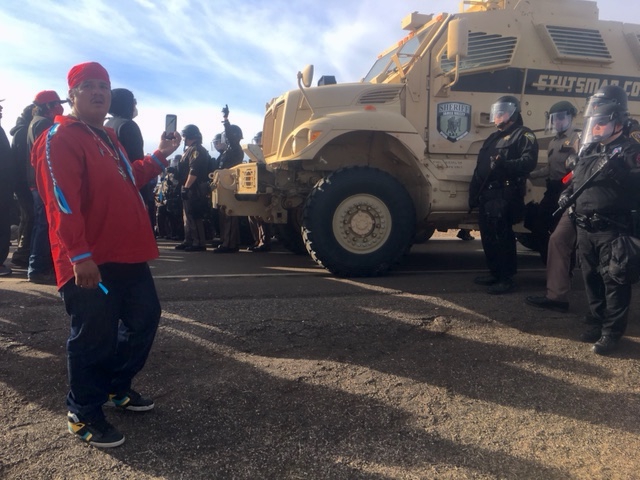 Protesters face off with law enforcement officers on a highway at the contested pipeline construction site near the Standing Rock Reservation and the Missouri River.

“You have a blockade across a state highway,” Cass County Sheriff Paul Laney told protesters gathered at the site along State Highway 1806 on Oct. 26. “You’ve occupied private land. You’re forcing our hand.”

The next day hundreds of state and county police and the National Guard moved in, flanked by army vehicles designed for withstanding roadside bomb explosions in the Iraq War. They arrested 141 people amid clouds of pepper spray. Charges brought against the protesters included engaging in a riot, trespassing and conspiracy to endanger by fire.

More than 50 protesters were treated for injuries and the arrested had numbers written on their arms. Most were held in Bismarck for hours, barefoot, in chain-link cages resembling dog kennels.

The treatment was very different from what mostly white pipeline demonstrators have received in neighboring states, according to veteran pipeline protester Jane Kleeb, chair of the Nebraska Democratic Party.

“They’re not doing this to protesters in Iowa,” Kleeb said. “They nicely put them in buses, give them a muffin, people sing songs, they let them have playing cards in the jail and then everybody goes home.” 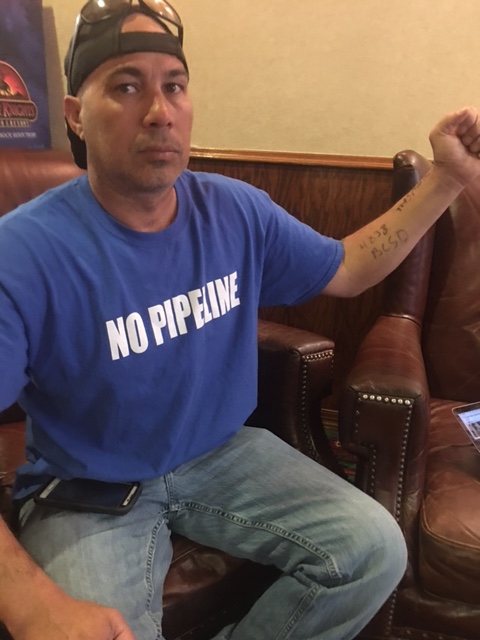 Dakota Access Pipeline protester Mekasi Camp-Horinek shows the numbers written on his arm after he was arrested for trespassing on disputed land near the Standing Rock Reservation on October 27. The pipeline company now holds title to the land but Native residents say it was illegally taken after being granted to them in an 1851 treaty.

The rough treatment of the protesters continued this week. A video posted on Twitter on Wednesday shows police responding with clouds of tear gas and rubber bullets when a group calling themselves “water protectors” tried to cross a tributary of the Missouri to pray on lands near the pipeline route.

Meanwhile, construction on the pipeline continues. Drone footage taken by opponents this week shows it has nearly reached the Missouri River. And backers say there’s no reason to hold it up.

“This has already gone through the process. It’s done ... all of the permits have been granted,” North Dakota Governor Jack Dalrymple told an energy conference last month. "It is patently unfair to change the rules of a pipeline project after the fact.”

But the Standing Rock tribe says it was never properly consulted and that the pipeline was fast-tracked. They got a break recently when the US Army Corps of Engineers put a hold on the key Missouri River crossing next to the reservation.

And this week President Barack Obama offered sympathetic comments. “My view is that there is a way for us to accommodate sacred lands of Native Americans,” Obama told NowThis News. The president said the Army Corps is examining whether there are ways to re-route the pipeline and that he would let the situation “play out” over the next few weeks.

With all the money they’ve spent and all the pipe they’ve laid, it’s not likely Energy Transfer Partners, the company behind the project, would agree to such a change.

#NoDAPL has momentum, but will it drive Native Americans to vote?