Protesters against the Dakota Access Pipeline stand off with police in this aerial photo of Highway 1806 and County Road 134 near the town of Cannon Ball, North Dakota on Oct. 27.

Protesters continued to clash with police in Cannon Ball, North Dakota on Friday, a day after 141 people were arrested and an encampment intended to block construction of an oil pipeline was razed in what protesters called a military-style operation.

Police in North Dakota arrested oil-pipeline protesters en masse Thursday after a tense standoff and bursts of violence that continued into the night.

Authorities confirmed two instances of gunshots on Thursday. One person was shot in the hand after being "run off the road by protesters," said the North Dakota Department of Emergency Services. Another protester was arrested after firing three shots at police. No injuries were reported.

Journalist Jenni Monet, who witnessed Thursday’s clashes, told The World that police in riot gear advanced on protesters wielding batons and other weapons.

“Some were using Tasers on protesters, pepper spray was employed, two armored tanks were slowly rolling on the highway pushing the protesters back,” Monet said.

Law enforcement reported late-night incidents of Molotov cocktails being thrown at officers and fires being set.

The chaos began erupting in the late morning when police started moving in to break up protest encampments on public roads and on private land.

Demonstrators moved to block two roads over the weekend and camped on private land in an effort to stop construction of the Dakota Access Pipeline — the subject of a months-long protest by Native Americans and supporters.

Police in riot helmets used a sound cannon device and pepper spray during operations that initially lasted more than five hours, before authorities said most of the several hundred protesters left voluntarily or were arrested.

"Hopefully, we have persuaded these protesters that our state highways and county highways, private property, is not the place to carry out a peaceful protest," North Dakota Governor Jack Dalrymple said at a news conference.

Dallas Goldtooth, a protester at the scene of the Thursday standoff, said police were "very aggressive" and had also fired bean bags and a "concussion grenade."

"The police action today was to remove protectors from this land," he said.

Morton County Sheriff Kyle Kirchmeier could not immediately confirm Goldtooth's account, saying operations were still ongoing. He said protesters were free to exercise their free speech rights "as long as it was done legal and lawful." 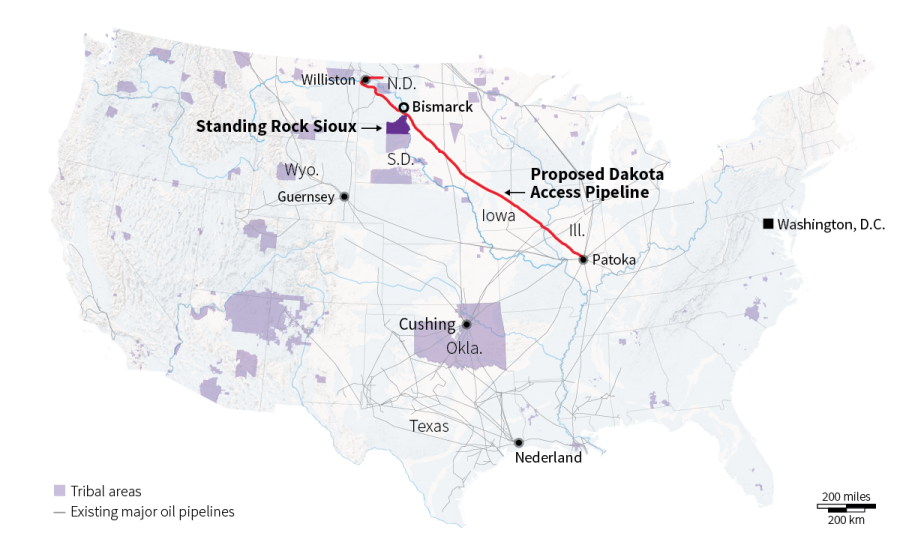 The Dakota Access oil pipeline is planned to run from oil fields in northwestern North Dakota to southern Illinois. Recent protests against the project have erupted at the point where the pipeline passes next to native land and crosses beneath the Missouri River near Cannon Ball, North Dakota. Sources: Reuters; US Census Bureau; Pipeline and Hazardous Materials Safety Administration; Energy Transfer.

The Native American-led protest has grown into a larger movement in the United States, drawing in other tribes, environmentalists and advocates for Native Americans.

“We saw a groundswell of support coming from international indigenous peoples,” journalist Monet said. She added that protesters came from as far away as Norway, Central America and the Philippines. “It’s truly one of the biggest environmental fights in the view of a lot of indigenous peoples right now.”

"One thing that I repeatedly heard," Monet says, "is that this fight is not over."

The Standing Rock Sioux Tribe, whose reservation is close to the pipeline's route, objects to the project, saying it would endanger the tribe's water supply by crossing the nearby Missouri River and destroy sacred Native American sites.

The tribe has asked the Obama administration to intervene to stop the pipeline construction and for the Justice Department to oversee local law enforcement.

The federal government has twice asked the pipeline operator to voluntarily pause construction near the tribe's reservation while the authorities reconsider the project's route.

But courts have refused to compel a halt. Energy Transfer Partners, which insists the pipeline complies with the law, resumed construction on Oct. 11.

By AFP's Nova Safo and PRI's The World staff.