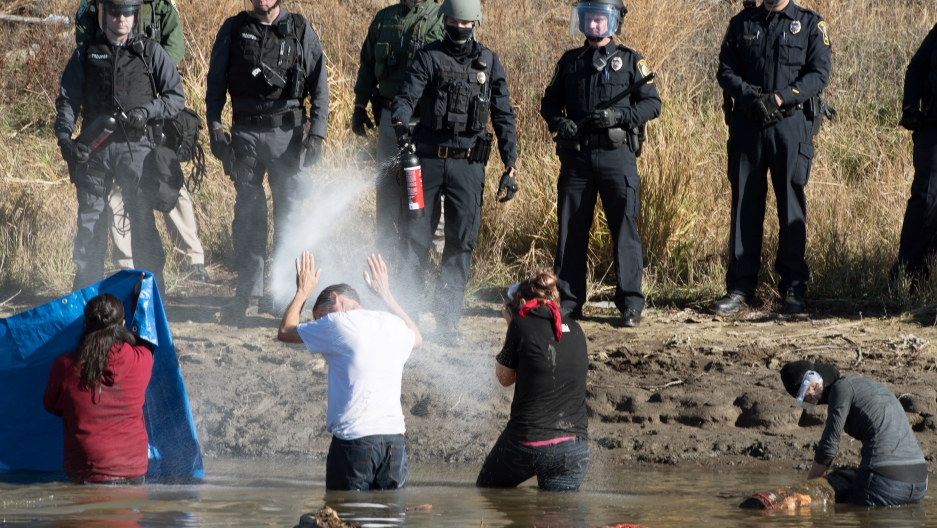 There’s no end in sight for the protests over the Dakota Access Pipeline.

This pipeline is being built to carry crude oil from the Bakken oil field in North Dakota to a refinery near Chicago. The Standing Rock Sioux tribe and its supporters say the $4 billion oil pipeline threatens its only water supply and harms sacred lands.

Police have made mass arrests and used pepper spray, riot gear, armored vehicles and rubber bullets to stop the protests.

Now, the United Nations is looking into allegations of human rights abuses by authorities against Native American protesters.

"When you look at what the international standards are for the treatment of people, and you are in a place like the United States, it's really astounding to hear some of this testimony," Roberto Borrero, a representative of the International Indian Treaty Council, told Reuters.

Many have raised concerns about excessive force, unlawful arrests and mistreatment in jail, where some activists have been held in cages.

Victoria Tauli-Corpuz is the UN's special rapporteur on the Rights of Indigenous Peoples. She says the protesters are within their rights.

“What concerns me most is the inhumane treatment against the water protectors. I think they have the right to assemble and express their own views,” says Tauli-Corpuz. “The actions taken by police are unwarranted. It’s something that should not be done because these are their legitimate rights.”

This protest is reverberating internationally. There are indigenous supporters from as far away as Australia and the Philippines showing solidarity with the Standing Rock Sioux.

Tauli-Corpuz says it's because this is a very common experience for indigenous people.

“Racism and discrimination is really something they experience on a daily basis,” she says. “This includes imposing a so-called development project on their territories without asking for their concerns or consulting them. I think that’s a very common experience.”

Tauli-Corpuz says that in the end, the Native Americans will be the ones who face any environmental impacts of the project.

“Nothing is being done about these kinds of injustices,” she says.

"My view is that there is a way for us to accommodate sacred lands of native Americans," he told NowThis News. “And I think that right now the Army Corps [of Engineers] is examining whether there are ways to re-route this pipeline."

When this will happen is uncertain. But it’s already getting cold and protesters are digging in for the winter.

Tauli-Corpuz hopes to travel to North Dakota to talk with the protesters and the oil companies. She believes dialogue between the two sides could provide a solution.

“I’m an optimist and I hope this will happen,” she says.