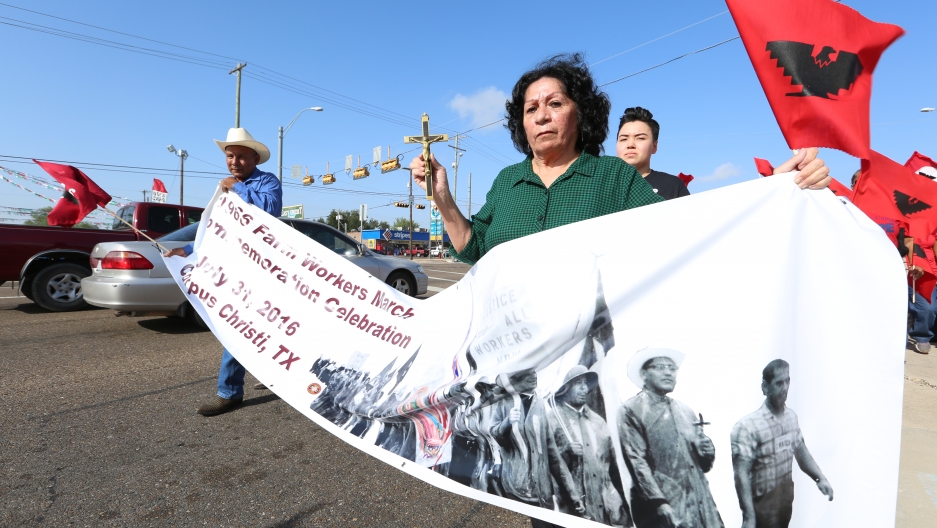 On September 9, 2016, Graciela Trevino marched in Edinburg, Texas to celebrate a 1966 farm worker strike. She also participated 50 years ago, when she walked from Rio Grande City to Austin, Texas to demand fair wages.

Courtesy of the City of Edinburg

In the summer of 1966, hundreds of farm workers in Texas marched from Rio Grande City to Austin — almost 500 miles over 90 days — to demand change.

They weren’t asking for anything fancy. They wanted better wages, restrooms and uncontaminated water for the people cultivating and picking melons and other crops.

Now 50 years later, more than 100 people — some who were at the original strike in Starr County — are are marching again. Earlier this month, they re-enacted the event that has come to be known as the “melon strike.” It’s a pivotal event in Texas history that has barely made it into the history books.

Daria Vera, 70, was among them. Vera started working in the fields in the Rio Grande Valley when she was 8.

Eugene Nelson of the National Farm Workers’ Association, now known as the United Farm Workers, helped organize the strike of 1966. Around that time, farmworkers in California were also asking for better working conditions. Cesar Chavez and Dolores Huerta were in the midst of boycotting the grape industry.

Also: In the town where Chavez began his labor movement, immigrants are now leaders

Vera and others protested and struck against several major growers in Starr County in 1966 too. She says the working conditions she endured were terrible.

“The plane would pass by and drop pesticides and it would land in the canal. And that’s where they would go get water for us to drink,” she says. 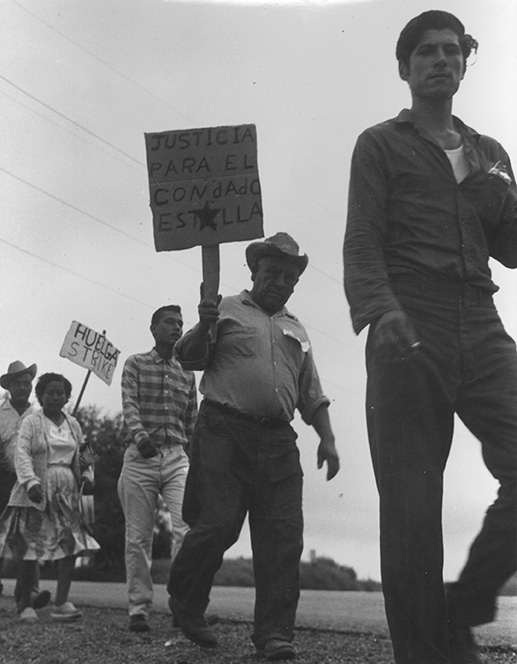 Daria Vera marched in Texas in 1966 for better working conditions. She wants people to remember that, at the time, people would say that Mexican Americans were lazy and didn’t want to work. They were fighting that stigma, too.

Maritza De La Trinidad is an associate professor of Mexican American studies at the University of Texas Rio Grande Valley. She says often Mexican American history isn’t well preserved. And the melon strike is no exception.

“There’s a lack of documentation and written records,” says De La Trinidad. “People don’t leave their own stories, people don’t leave letters, or diaries, or other types of autobiographies or personal stories.”

She has reviewed many US history textbooks from publishers who want her and others to use their publications in classrooms. She says that many of them aren’t very inclusive.

“There’s very little Mexican American content and the contributions that Mexican origin people have made to the making of America, especially the Southwest,” she says.

De La Trinidad says some textbooks are better than others, but the overall lack of Mexican American history causes younger generations to grow up without learning about their heritage.

This semester, one of her own college-level classes is focusing on fixing the problem. They are collecting oral histories of the participants from the 1966 strike, from people like Vera. De La Trinidad says the original protesters are eager to share their stories.

De La Trinidad is looking forward to the potential of the upcoming project.

“I would like to definitely see articles on various aspects of the strikes and possibly a book,” she says. “There are plenty of stories and plenty of information we can gather, but it will be a long process.”

Arnulfo Daniel Segovia grew up in the Rio Grande Valley and is now a graduate student at the University of Texas campus there. He will also help document the stories of the melon strike. He says he never heard of this historic event growing up.

“That just makes it more pressing that we get this material down and we get it now and we start laying the groundwork for future generations,” says Segovia. 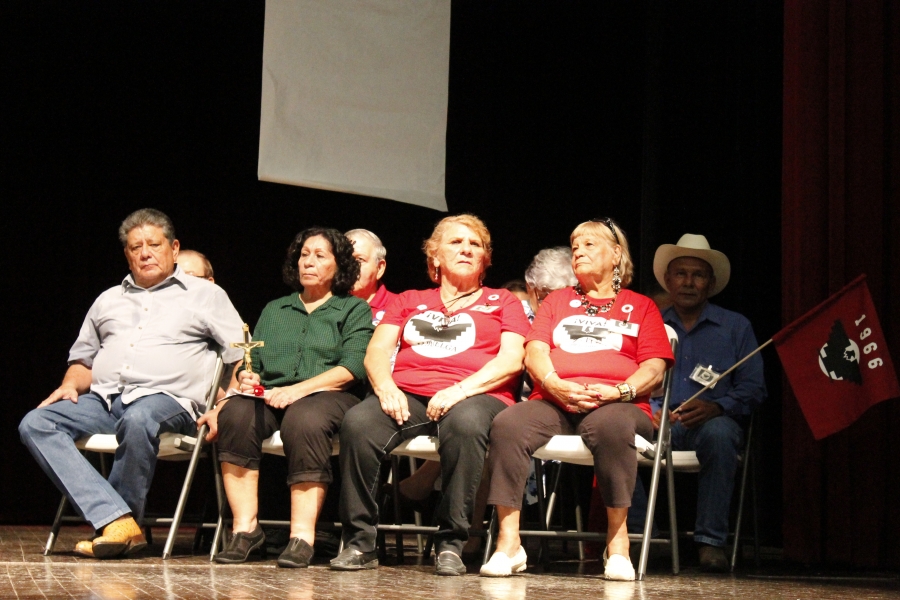 Some of the original strikers and marchers from the Rio Grande Valley gather on stage before addressing the audience about some of their experiences during 1966.

Vera wants people to remember when farm workers began a fight for their rights because, at the time, people would say Mexican Americans were lazy and didn’t want to work. She knew that wasn’t true — and she wanted a livable wage.

“I would say, ‘you can kill us, hurt us, or do whatever you want, but I’ll continue fighting for my rights,’” says Vera.

After the strike began, Vera, 14 men and a woman from California, locked hands together and blocked the international bridge in Roma, Texas, to stop the growers from bringing in strike breakers from Mexico, but police came and arrested the men.

“So we told the other women to come and help us and they told us they were afraid. So I told them to go home — what were they doing here?” says Vera. “I told the woman from California, ‘Let’s block the bridge, you and I. It doesn’t end here.’ So we layed down and blocked the bridge.”

Vera and the woman from California were also arrested, but then released. Vera says she was never afraid and knew the work she was doing was important for equal rights for farmworkers.

“We still hear stories of workers who are not being paid their fair wage,” says Valdez-Cox. “A lot of the conditions have changed, but many still remain.”

Also: Farm workers today still protest their working conditions. This boycott in Washington state only just ended, while unionizing still eludes many workers. Some farm workers worry for their basic safety in the fields.

Valdez-Cox says the commemoration serves as a reminder of those who stood up against injustices so that they don’t happen again. She says it’s especially important now because of the current political rhetoric against Mexican Americans during this election cycle.

“It seems like racism is alive and well with some political candidates,” says Valdez-Cox. “We’re up against hard times with those politicians who are running and the negative remarks we have heard about Mexican American people.”

Valdez-Cox says she hopes the commemoration lets the younger generation know that there is still work that needs to be done both on and off the farms. For her, workers’ rights, immigration reform, better living conditions in colonias, deportation relief programs, are all issues that still need to be addressed and worked-on today.

“Come November, it’s going to be super important to make sure that [young people] participate, that they vote, because right now racism is alive and well and we need to fight back.”

More: How Japanese and Mexican American farm workers formed an alliance that made history

And the fight is worth it for those who re-enacted the melon strike.

The 1966 strike ended a year after it began, without concretely reaching its goals. But Valdez-Cox says the strike and march gained respect for farmworkers.

“We want young people to know that our parents and our grandparents paved the road for many Mexican Americans that were to come after,” says Valdez-Cox.