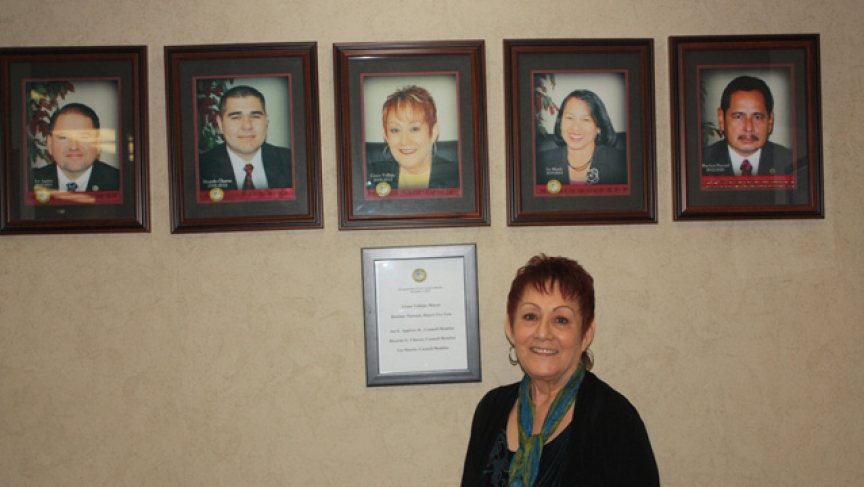 Former farmworker and current Delano Mayor, Grace Vallejo, stands in front of photos of her fellow city council members. The city council is made up of all Hispanic members. "That's a huge change from back in the 1960s. We've come a long way," she says. Vallejo is the first Latina mayor of Delano.

Delano, California, is still surrounded by vineyards, but a lot has changed since the days of Cesar Chavez. In the 1960s, white growers controlled the police, the courts, and the town government. Today, at Delano City Hall, you’ll meet people like Grace Vallejo.

"Right now, we’re standing in front of the pictures of our city council," she says. "As you can see, they’re all Hispanic, so we’ve come a long way — a long, long way."

Vallejo's family is Mexican American, and she picked grapes alongside her parents for years. Now, she is the town’s mayor — the first Latina to hold the job.

"I, for one, do credit a lot of it to the work we did with Cesar, because he trained [us] on how to be organized, how to get resources, so we could move forward on whatever we’re going to do in our life," she says. Vallejo also points to a high school named after Cesar Chavez, something that took a long time to achieve in Delano. The school was built on a former vineyard about ten years ago.

When it was under construction, there was still tremendous animosity towards Chavez in Delano. Growers were still seething about the grape boycott and the workers' movement decades earlier. The farmer who sold the land for the high school tacked on an additional fee for naming the school after Chavez.

The debate over the school’s name divided the town. School officials, sympathetic to Chavez, eventually won. They argued the school’s name recognized how Chavez gave farmworkers the confidence to get educated and become powerbrokers in Delano.

"It’s a huge change in Delano," says Vallejo. "It’s like the caterpillar that became the butterfly. I think that’s what happened to our lives. We don’t want to fly away. We want to be here and we want to improve things."

Many of the students and teachers at Cesar Chavez High School are children of farmworkers. English teacher Lorraine Leynes came back to Delano after earning a Master’s degree in San Diego. She says she didn’t learn about the significance of her town’s history until she went to college.

"Delano, the farmworker movement, Cesar Chavez were being mentioned in textbooks all over the world. I knew very little history. So I made it a point to learn my history," Leynes says. Now, she teaches her students that history and the importance of the farmwork that still sustains Delano.

"Something that I tell my students all the time — grapes that are being eaten at Costco in New York, or Walmart, or Disneyland — those are grapes that are picked by our relatives here in Delano, and they’re being sold internationally," Leynes says.

Many of the new immigrants coming to Delano don’t know who Chavez was, says Irene Mendoza. She’s one of thousands of Delano residents from Mexico who still work picking and packing grapes.

"I hear from other farmworkers that, thanks to Chavez, we have this or that, but that they don’t really know who he was," Mendoza says. She knows Chavez’s movement brought her the unemployment pay she gets in the winter when work in the fields dries up. Like many other immigrants here, Mendoza came to the US well after the farmworker movement peaked in the 1960s and 70s. Since then, the United Farm Workers, the union that Chavez co-founded, has seen its membership dwindle.

Mendoza has never worked under a union contract — and says she’s not sure she needs one.

"Now, the conditions in the fields are better," says Mendoza. "We have cold water, enough bathrooms." The only thing wrong, she says, is that she barely earns above minimum wage.

The farmworkers union is hoping field workers like Mendoza will be inspired to join the union when they see the film "Cesar Chavez" on the big screen. About a thousand farmworkers watched a premiere of the new movie this week — projected in front of the old union hall in Delano.

This is the second piece in a two-part series on the legacy of Cesar Chavez in Delano, California. The first piece can be found here.

This interactive tour of Delano, California was produced by Oliva Allen-Price of KQED.