People march during a 2013 event. On Sunday, organizers began a march from Long Beach to Albany for farmworkers rights.

A New York farmworker we’ll call Juan is hopeful that soon he and his colleagues will have rights already enjoyed by other workers around the country.

Juan, who didn't want to be identified by his real name for fear of losing his job, wants to collectively bargain without fear of employer retaliation. At the top of the list of protections he is seeking are worker’s compensation for injuries and paid leave during recovery.

After 15 years of grassroots organizing by farmworkers and labor advocates in New York, the right to collective bargaining may be on the horizon for the state's approximately 60,000 farmworkers.

The New York Civil Liberties Union filed a lawsuit last week against the state and the governor. The advocacy group says denying farmworkers these protections violates the state constitution.

Governor Andrew Cuomo agrees. In a statement, he said that his administration will not fight the lawsuit: “We will not tolerate the abuse or exploitation of workers in any industry. This clear and undeniable injustice must be corrected.”

Juan, 26, plants and harvests crops, sometimes by tractor, at an upstate New York vegetable farm. He emigrated from Mexico in 2006 and is undocumented, like about 75 percent of New York’s farmworkers, according to the estimates of some outreach workers.

He says he’s lucky he hasn’t suffered any serious injuries because he’s seen how work-related injuries play out for workers without legal protections.

“I’ve known people who have had serious accidents and couldn’t work any more and don’t get paid leave or disability,” he says. “Many times they’re fired because they aren’t able to work, or they return to their home countries. Or they start working once they’re able, without being paid for lost time.”

Also: How the produce aisle looks to a migrant farmworker

Katia Chapman, a coordinator at Rural & Migrant Ministry, which has been campaigning for farmworker rights, says her group is not going after serious abuses by farm employers. It’s the small incidents that add up, such as docking a few hours of pay or not documenting a work-place injury as worker’s comp, thereby erasing a paper trail for later related medical problems.

“It is the daily injustices that the majority of workers are marching for,” Chapman says.

Farmworker exclusion from the right to organize dates back to the Jim Crow era, a time when the majority of Southern farmworkers, as well as domestic workers, were black. As a concession to a bloc of Southern lawmakers, President Franklin D. Roosevelt’s landmark worker-rights legislation, the Fair Labor Act of 1938, did not afford protections to farmworkers or domestic workers. A similar trade was made the same year when New York lawmakers amended the state constitution to protect only selected workers’ rights. 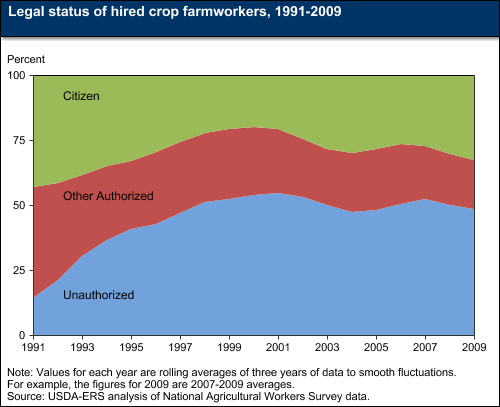 The racist policy lives on, but today it is predominantly immigrant workers who are excluded from legal protection. According to data from the National Agricultural Worker Survey, as of about five years ago, 71 percent of the country’s 1.1 million farmworkers are foreign born, and 48 percent are not legally authorized to work here.

“Part of the reason this has gone on for so long is that people think that their exclusion [from unions] has something to do with immigration, when really it doesn’t at all. That’s been a canard that has really obscured the issue,” says Ujala Sehgal, a spokesperson for the NYCLU.

There are no legal reasons undocumented workers can’t join unions, but confusion around that fact is common in industries where the right to organize is protected, says Jose Oliva of the Food Chain Workers Alliance, a national coalition of workers’ rights groups.

“It’s a recurring theme for a lot of our members. A lot of workers who are interested in joining a union will call us and ask us all these questions about, ‘Is it legal?’” he says.

Undocumented workers also fear that they could be fired at any time — a fear that is sometimes reinforced by employers who threaten deportation, Oliva says.

Juan has never been threatened, but says he has heard employers make this threat many times to workers who complain. “If there’s a problem or an accident, they’ll say they’ll call immigration,” he says.

Farm Bureau of New York, an industry advocacy group, said in a statement following the NYCLU’s lawsuit that while they are pushing for immigration reform to help protect employees, they do not think that unionization is appropriate for farmworkers.

“The right to organize is a labor union tactic that may work in a factory setting, but not on a farm where the planting and harvesting of crops and the milking of cows are extremely time sensitive and weather-dependent. For a farm to lose employees to an untimely walk-off of the job could jeopardize a season's crop and place livestock health at risk,” the statement says.

David Coon manages a small upstate dairy farm, Coon Brothers Farm. He worries that collective demands might not make sense for all farms. For example, he says, a large operation might be able to grant workers a 40 hour week, but he couldn’t meet a demand like that at his farm, where seven full-time employees generally work six days per week.

Coon pays his workers $12 or $13 an hour, $3 to $4 over New York's minimum wage. Many of his employees have been with him for several decades. He knows, though, that modern machinery could replace some human labor.

“Every time the demands of the people go up, the equipment looks more appealing,” Coon says.

On Sunday, a group of farmworkers and advocates commenced a 200-mile march from Long Island to Albany. The march will be completed in segments through June 1. About 50 marchers completed eight miles on Sunday, said Chapman, who organized and marched in the event.

Ten farmworkers participated in the first leg of the march — one woman traveled six hours from near the Canadian border.

“So many people can’t take a day off. If they take a day off they lose their job,” Chapman said. “Which is an excellent example of why we’re marching.