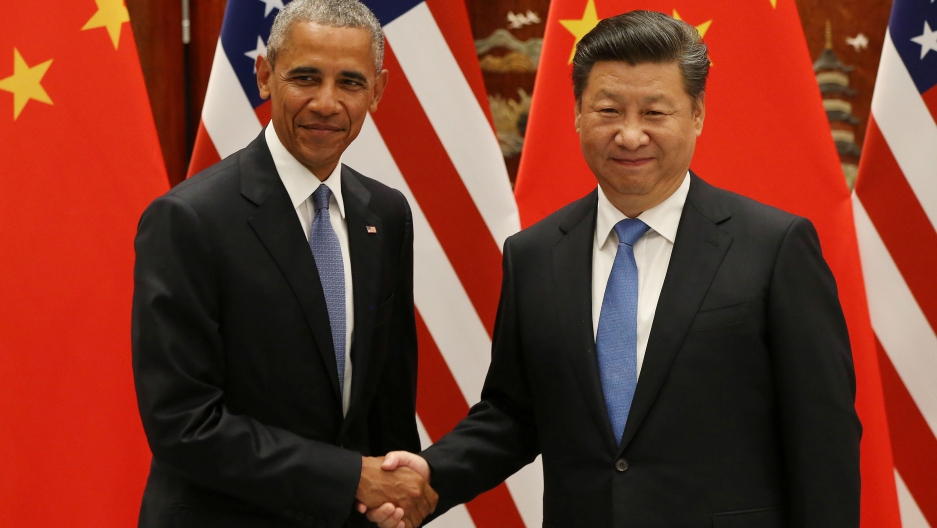 President Barack Obama and Chinese President Xi Jinping shake hands during their meeting ahead of the G20 Summit at the West Lake State Guest House in Hangzhou, China.

The United State and China, the two nations with the most global warming emissions, have now ratified the landmark Paris Agreement, with other countries expected to follow suit.

US President Obama and Chinese President Xi formally ratified the Paris climate agreement as heads of state gathered at the G20 meeting in China earlier this month.

Alden Meyer of the Union of Concerned Scientists, says this is a huge step toward implementation of the Paris Agreement.

Related: Obama seeks to cement a climate legacy with China before the US election

A number of countries are either taking action now or signaling they will take action by the end of this year, Meyer adds. These include Brazil, Argentina, Chile, Canada, Australia and Ukraine. “The latest estimate is that we'll have somewhere between 55 and 60 countries representing almost 60 percent of global emissions to push us over that finish line and have Paris take effect,” Meyer says.

The current state of the US presidential race has many other countries worried, however, Meyer says. Republican nominee Donald Trump has vowed to abandon the Paris Agreement if he wins the White House in November. If the agreement has already entered into force, it would be four years before the US could formally withdraw, under the terms of the agreement, Meyer explains. But that's not the big question. The big question is, would a President Donald Trump take any action to live up to the US commitments under Paris?

“The answer, from his statements, seems to be no,” Meyer says. “He would not push to decarbonize the US economy, to shift away from coal and other fossil fuels to renewables, and all the other steps that President Obama has been taking. ... So, it’s not whether he would formally withdraw the US from the agreement, it's whether he would lift a finger to live up to our commitments under it.”

Already, the United States is facing the prospect of not living up to its commitments: In February 2016, the Supreme Court issued a stay against President Obama’s Clean Power Plan, a centerpiece of the administration's efforts to combat climate change.

“That was not a ruling on the merits [of the plan],” Meyer explains. “The Clean Power Plan will be up before the appeals court here in DC and the Circuit Court later this month. It's expected to survive that challenge and likely will go to the Supreme Court next year. There it partly depends on the outcome of the election, and who takes the seat vacated by the death of Antonin Scalia. ... Most states are going forward with preparing to implement their obligations under the Clean Power Plan, which shows where their betting is.”

“The good news is that there is unprecedented investment in clean energy, renewable energy and energy efficiency, and the costs of those technologies are coming down,” he says. “It looks like we may have reached a global peak in emissions and we are starting to bend the curve downward. The bad news, of course, is that there's still a fair amount of investment in conventional fossil fuels.”