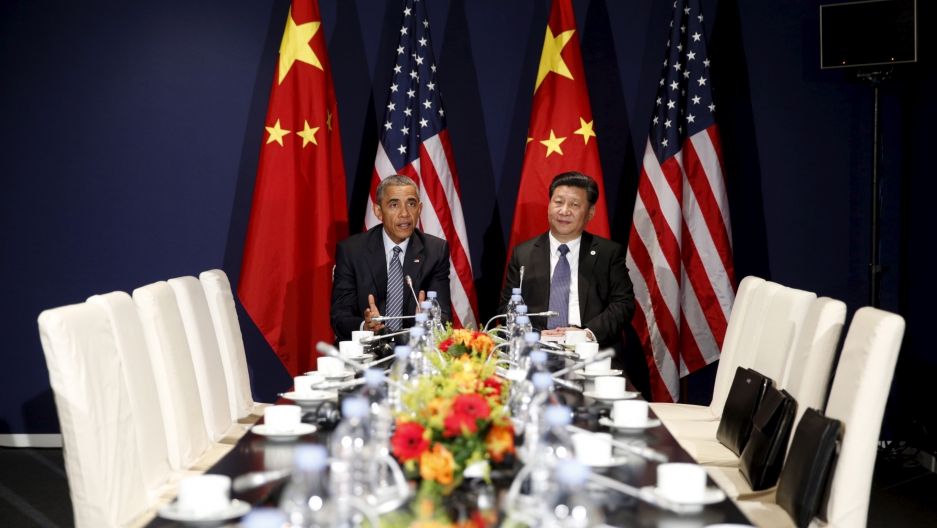 US President Barack Obama meets with Chinese President Xi Jinping at the start of the two-week climate summit in Paris on Nov. 30, 2015.

History will show that the Paris agreement will "ultimately prove to be a turning point," Obama said, "the moment we finally decided to save our planet."

The news came Saturday before the G-20 summit of industrialized and emerging-market nations kicks off on Sunday in Hangzhou, China.

The move by the world's two largest economies — and biggest polluters — is key in ensuring the Paris agreement goes into effect.

The 180-nation Paris deal sets goals to limit greenhouse gas emissions and funnel trillions of dollars to poor countries that face much of the worst climate impacts.

“It is unthinkable that we would solve this problem unless the US and China are part of the solution,” said Orville Schell, head of the Center on US-China Relations at the Asia Society.

Together, the US and China emit about 40 percent of the world’s carbon dioxide.

More nations will still need to accept the Paris agreement for it to go into effect. To be exact, at least 55 countries representing at least 55 percent of global greenhouse gas emissions need to give their final ratification or acceptance for it to enter into force.

The White House hopes that will happen before the end of the year.

But the US and China accepting the agreement themselves is still be a big deal, both because they’re responsible for a big chunk of global emissions and because of the shift that move will represent.

Schell points out that even five or six years ago, China saw climate change very differently than it does today.

“China tended to view climate change as sort of a plot foisted on them by the West to slow down their development,” Schell said — development the country felt it had a right to.

“The West, after all, had its industrial revolution, why shouldn’t China?”

Schell credits an amped up US focus on China and the environment after failed 2009 climate talks in Copenhagen with helping change the country’s thinking.

“Because of the tremendous efforts that the United States made through universities, through national labs, through environmental NGOs, China did slowly come around and began to recognize this was a threat to China too,” Schell said.

China and the US then became tandem leaders in the international push for countries to agree to curb carbon emissions.

US-China cooperation on climate policy was "once unimaginable," said Andrew Steer, head of the World Resources Institute. He hailed Saturday's announcement by the two countries for "raising the bar" on climate action.

An agreement to cut emissions between the word's two largest economies announced by Obama and Xi in China in 2014 paved the way for an international deal nearly 200 countries adopted in Paris in December 2015.

As the deal inches through national and United Nations protocols toward implementation, it’s not clear whether this tag-team approach toward limiting carbon emissions will continue past January.

Trump tweeted this in November 2012: “The concept of global warming was created by and for the Chinese in order to make U.S. manufacturing non-competitive.”

Trump has since said that was a joke, but last December he told Fox News that he thought climate change is a “big scam for a lot of people to make a lot of money,” and singled out China as a beneficiary.

“China is eating our lunch because they don’t partake in all the rules and regulations that we do,”  Trump told Bill O’Reilly in December 2015,“and then they compete because they’re spending a lot less money to build their products.”

In an energy speech in May, Trump pledged to “cancel” the Paris agreement. A single world leader couldn’t do that, but if Trump becomes president, he could pull the US out.

Which begs the question: If the US reneges on its promises, would China do the same?

“Policymakers in China are watching what’s happening in the US,” Lin said. “But really China is committed to fulfilling its goals under the Paris agreement regardless of what happens in the US or any other country. This is really for their own benefit.”

Lin said choking smog in China’s major cities and money to be made in green energy are motivation enough to cut pollution.

“China has the world’s largest wind and solar industries; they are really pushing on electric vehicles, these are all sectors they see as future growth areas,” Lin said. “I don’t think they’re going to be turning around just because of the results of the election.”

But US leadership will inevitably have other impacts on China’s carbon emissions.

China and the US work together on electric vehicles, energy-efficient buildings, and carbon capture techniques, according to Ranping Song from the World Resources Institute.

Song argues if US support for that work drops off, “that [research] may actually slow down a few years down the road.”

In fact, emissions must continue to reduce in the upcoming years in order to prevent the most catastrophic impacts of climate change.

This radio segment was produced on Friday in advance of the expected announcement by the US and China. The article includes updates on Saturday from Agence France-Presse and the PRI newsroom.