Murals created by Orlando Letelier's son, Francisco Letelier, hang at American University in Washington. They convey the emotions around the assassination of his father, a former Chilean diplomat.

Forty years ago this week, a car bombing in Washington that killed a Chilean diplomat and his American colleague shocked a city where many had imagined that kind of thing only happened in far-away countries.

Some DC residents will remember the assassination of Orlando Letelier and Ronni Moffitt on Embassy Row. But many younger folks are just hearing their names for the first time.

Today, the world is learning more details about the first and perhaps only foreign state-sponsored terror attack in America's capital. CIA documents, kept out of public view for decades and unearthed by Obama administration officials on Friday, lay out the grim details of who carried out the assassination and how. The files allege crimes by a brutal South American dictatorship committed in broad daylight in the United States — and which the US government hid from the public for decades.

The target of the attack, Letelier, 44, was the former foreign minister of President Salvador Allende, Chile’s socialist leader who died in a military coup in 1973. Letelier had gone into exile in Washington, working for the left-leaning think tank Institute for Policy Studies, and spreading the word about the military junta’s disappearance and detention of dissidents under Pinochet.

On Sept. 21, 1976, Letelier’s legs were blown off by an explosion that erupted from under his car, killing him instantly. A piece of shrapnel pierced his 25-year-old colleague Moffitt, who later died at the hospital. Her newlywed husband Michael Moffitt was also in the car: He survived, and was found yelling hysterically next to the wreckage when police arrived on the scene. 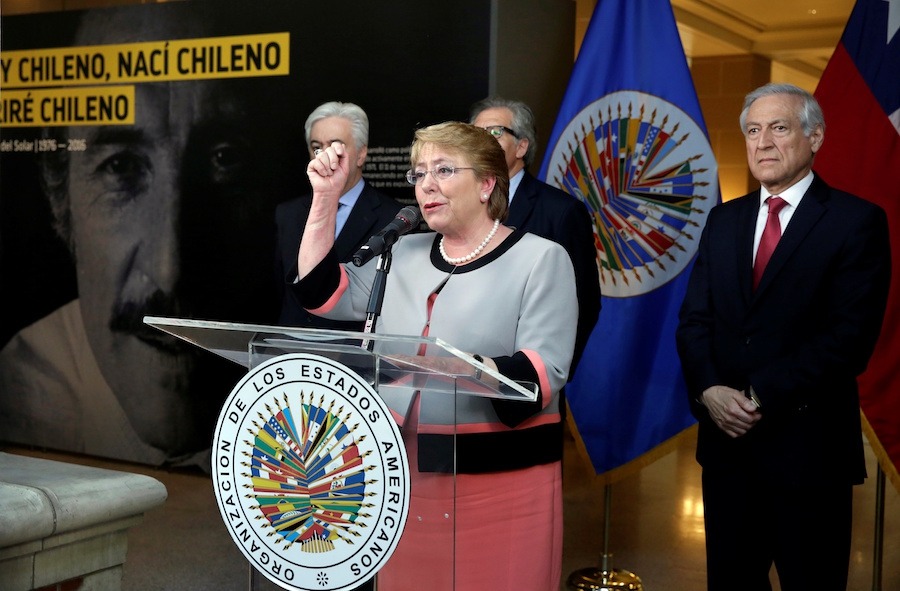 Chilean President Michelle Bachelet speaks at the opening ceremony of a photo exhibit in honor of the murderd former Chilean Foreign Minister Orlando Letelier at the Organization of American States in Washington, DC on Sept. 23.

Last October, Secretary of State John Kerry hand-delivered a USB drive of redacted State Department memos and CIA intelligence on the Letelier-Moffitt murders to Chilean President Michelle Bachelet at a conference in Valparaiso, Chile. The files disclosed the smoking gun evidence that the CIA had known since the late '70s: that Pinochet had given the order to murder Letelier in Washington.

But upon reviewing the pages, Chilean diplomats and historians noticed that the file was incomplete. Certain pages were missing. Specifically, a 1987 memo written by then-Secretary of State George Schultz to President Ronald Reagan referenced a CIA intelligence review that showed the agency had “convincing evidence” that Augusto Pinochet had personally ordered his intelligence chief to carry it out, with Schultz requesting the president to act and cease the administration's support for Pinochet. But the CIA report itself was missing.

“We realized immediately that there were other documents that justified these texts and explained most of the things that we were looking at,” says Chilean Ambassador Juan Gabriel Valdes. He formally requested the US declassify the documents two years ago, on the grounds that a Justice Department investigation of the attack was finished.

At a memorial for the victims in Sheridan Circle on Friday, US Deputy Secretary of State Heather Higginbottom stood in front of the victims’ families, Chilean politicians and journalists just feet away from where the bomb exploded four decades ago, and presented President Bachelet with a second tranche of secret intelligence cables and memos on the Letelier-Moffitt case.

The documents released on Friday outline the cover-up Pinochet orchestrated to undermine and hide evidence of his lead role in the attack.

They show that the Chilean dictator even threatened to eliminate his top intelligence agent, Manuel Contreras, in order to avoid culpability, according to Peter Kornbluh, director of the National Security Archive’s Chile Documentation Project at George Washington University, who has reviewed the files.

Kornbluh says Contreras was the only other person with proof of Pinochet’s crime. The top spy informed the dictator that if anything were to happen to him, a briefcase full of evidence implicating Pinochet would go public.

The CIA learned that Pinochet had even personally gone to meet with the Chilean supreme court chief, the documents show, to tell him that under no circumstances should the court extradite Contreras to the United States.

We now know that while some steps were taken to pull back support for Pinochet, President Reagan never extradited the leader — as did neither George H. W. Bush, Bill Clinton nor George W. Bush.

Pinochet was never indicted for the disappearances, torture and murder carried out by the military government’s secret police over a period of 17 years.

“The fact that they knew decades ago and didn't say anything is a huge irresponsibility," says Cristian Letelier, 59, the slain diplomat’s eldest son. He says his family has always known Pinochet was behind the murders.

“The fact that they knew decades ago and didn't say anything is a huge irresponsibility," says a son of slain diplomat Orlando Letelier.

For decades, the assertion that the president of Chile ordered a terrorist attack in Washington was pitted as a conspiracy, or at best, political opinion. Ordering an attack to silence a dissident in the US capital would be an audacious act for any foreign state, but even more unimaginable for a presumed US ally like Chile.

FBI agents who worked on the case told The Washington Post this week they were fearful an attack would create a precedent and send the message that assassinating foreign diplomats in the US capital could go unpunished. So why didn’t Reagan or subsequent US presidents indict Pinochet when they had evidence to do so?

John Dinges, investigative journalist and author of “Assassination on Embassy Row,” believes the paper trail of CIA intervention in Latin America is seeing the light of day only now because, decades ago, it would have been a political bombshell for the US.

And the US government wanted Pinochet to remain legitimate. After all, the CIA supported the ouster of Latin America’s first democratically elected socialist president, Salvador Allende, out of the belief that a socialist Chile, and others like it, were a threat to US hegemony in the region. “Latin America's democracy was sacrificed on the altar of the fight against the Soviet Union,” Dinges says. 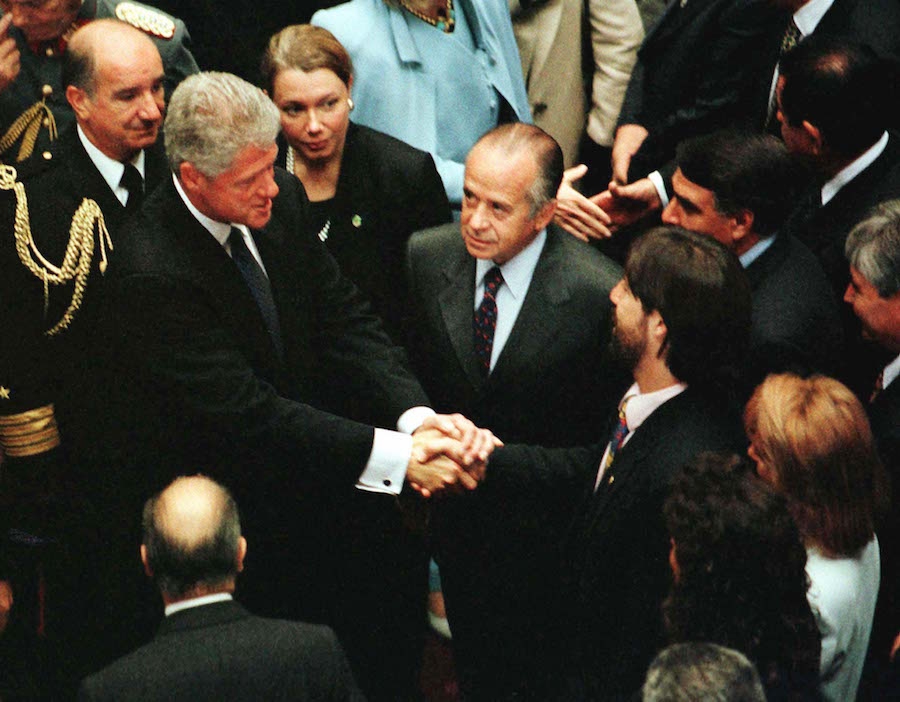 US President Bill Clinton shakes hands with Chilean congressman Juan Pablo Letelier after addressing the Chilean National Congress in Valparaiso on April 17, 1998. Letelier is one of the sons of the murdered diplomat Orlando Letelier.

President Obama is the second president after Bill Clinton — whose administration identified and published 23,000 documents on Chile from seven government agencies including the FBI and NSA — to engage in what Kornbluh calls “declassified diplomacy.”

“Pinochet got away with an act of terrorism in Washington, DC and now all we have is the verdict of history and these documents are what lead to that judgment,” Kornbluh said at the Organization of American States on Friday.

For Francisco Letelier, Orlando’s second youngest son who was 17 at the time of his death, the new documents don't change anything.

“Someone recently asked me, if there’s nothing in those documents, are you going to feel disappointed? And I told them, no, absolutely not. Because we made it to this point with very little [evidence],” says the younger Letelier, now 57.

“We didn’t have anything in ‘76 and we kept going. So the fact that they give us something, or not, it’s the same. It’s a tool that we can use to keep demanding transparency to keep uncovering the events of that day.”

Read more: 'My father lost his life through a bombing, by agents of a man who Henry Kissinger supported'