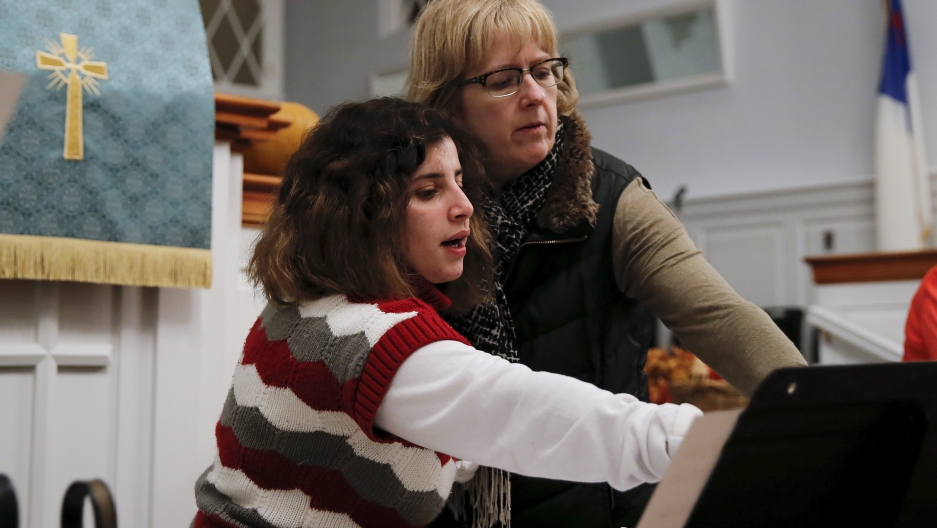 A recent refugee from Syria, Sandy Khabbazeh, on the left, takes part in bell choir practice at her church in Oakland, New Jersey on November 19, 2015. A national network of more than 1,000 churches actively helping Syrians resettle in the US.

People from Syria, lucky enough to have escaped the civil war alive, then to make it all the way to the United States as refugees, have stepped into a political free-fire zone.

More than half of US governors, all but one of them Republicans, say that Syrian refugees are not welcome in their states.

GOP presidential candidate Donald Trump has gone further. He has said that Muslims should be banned from entering the US. And without offering any evidence, Trump has said that many of the refugees from Syria are with the terror group ISIS.

On the whole, conservative Christians are pretty solid supporters of the Republican Party. But many of them don’t agree with the notion that America should close the door on Syrian refugees.

“I would say that the majority of evangelical Christians, they do care about the refugees,” says Pastor Bob Roberts Jr. of Northwood Church in Keller, Texas.

“They realize that you can’t put a political sticker on everybody’s back,” Roberts says.

His congregation is part of a national network of more than 1,000 churches actively helping Syrians resettle in the US. The churches are working under the leadership of the evangelical humanitarian and resettlement organization World Relief.

Roberts says he gets some criticism for his work with refugees from Syria, but he says helping those in need is “what Jesus has commanded us to do.”

“Jesus makes it very clear in Matthew 25 that we’re supposed to love people to the degree that we feed them, we clothe them, we care for them,” Roberts says.

There are certainly risks, he adds. And that includes the risk that someone who might want to do harm could slip through security protocols and enter the US.

“The risk, however, of being hard-hearted toward the rest of the world far outweighs the risk of somebody coming through that’s going to create some other problems, because the reality is the world is connected now. This idea that we live on little islands and we can keep everybody out is crazy,” he says.

Last month, the Obama administration announced that it had reached its goal of settling 10,000 Syrian refugees.

Some see that number as a sign that America has failed to meaningfully respond to the worst humanitarian disaster of this generation. Nearly 5 million Syrians have fled their war-torn country. Another 6.6 million are internally displaced and more than 13 million are in need of humanitarian assistance, according to United Nations figures.

“We’ve got to figure out a way to do more,” says Travis Wussow of the Ethics and Religious Liberty Commission, the policy arm of the Southern Baptist Convention. “We can quibble about exactly how many refugees ought to be admitted to the United States. But every refugee that does make it to American soil, Southern Baptists need to be leading the charge on welcoming them. Period.”

Wussow says there are legitimate security concerns about the public’s safety when it comes to vetting refugees.

“It’s incumbent upon the Obama administration to work quickly to answer some of these questions,” Wussow says. But what is happening in Syria, “it is just deeply distressing … and it ought to motivate us to not just raise security concerns as a way to kick the problem down the road.”

“We have to contribute to the solution of this problem,” he says.

Also: Small-town America is arguing over whether to welcome Syria’s refugees or fear them

The political rhetoric around the issue of Syrian refugees is a real problem, says Wes Magruder, senior pastor at the Kessler Park United Methodist Church in Dallas. He’s also chairman of the nonprofit Refugee Services of Texas.

When his fellow Christians express their skepticism about his work helping to resettle Syrians in the Lone Star State, Magruder says he talks about the refugees he has gotten to know.

“I emphasize that they’re extremely vetted already,” he says. “All you have to do is tell their stories, about how they’re making progress and beginning a new life in America. Once you know people, know their names, it’s very different.”

Setting aside the politics of the issue, Wussow says it’s incumbent upon Christians “to love our neighbors.”

“We believe that the way that we care for [people], especially those who are not like us, cuts to the very core of our identity as followers of Christ.”