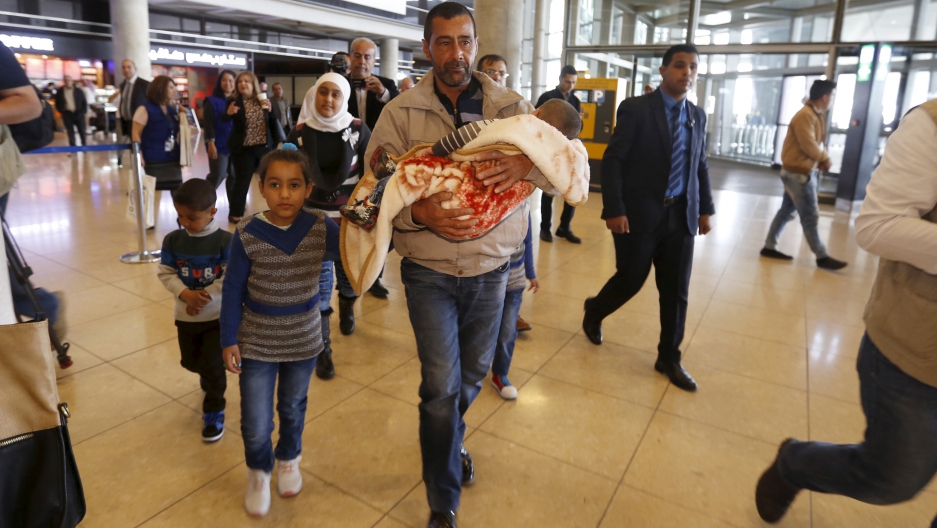 Syrian refugee Ahmad al Aboud and his family members, who will be resettled in the United States as part of a refugee admissions program, walk to board their plane at the Queen Alia International Airport in Amman, Jordan on April 6, 2016. By that time, just over 1,000 refugees had been allowed to come to the US.

In a November interview with Fox News, Republican presidential candidate Donald Trump had a question about the United States' effort to accept Syrian refugees.

“It’s a total disaster. The people are going to come in,” he told commentator Sean Hannity. “I talked to you about this two weeks ago, where we talked about the migration, how so many of the people in the migration were strong young men. You look at them. I’m saying, Where are the women? Where are the children?”

Now, as it appears that the US will meet President Barack Obama’s goal of admitting at least 10,000 Syrian refugees this fiscal year, the makeup of this new refugee population is becoming more clear.

Of the more than 8,000 Syrian refugees admitted to the country so far, 78 percent are women or children, according figures released by the State Department this month. Some 58 percent are children, with a roughly even split between girls and boys.

Only a few months ago, refugee activists and experts were concerned that the US would not admit many of the almost 5 million Syrian refugees who have fled the country since civil war began there over five years ago. By April 2016, halfway through the fiscal year, only 1,285 people had been admitted. However, monthly totals have increased steadily, with over 2,000 arriving in July. The uptick came as the State Department, the Department of Homeland Security and other government agencies working in tandem on the project expanded their capacity.

“We can now say that we’ve welcomed 8,000 Syrian refugees so far this year, and that we are very confident that we will welcome at least 10,000 refugees from Syria by the end of this fiscal year,” said Anne C. Richard, assistant secretary of state for the Bureau of Population, Refugees and Migration, in a conference call Friday with reporters.

Richards said DHS had ramped up its staffing to interview and vet refugees in several key locations, including Jordan, where officers conducted interviews for about 12,000 applicants who had been initially screened by the United Nations High Commissioner for Refugees.

The State Department also restarted interviews of UNHCR-screened refugees in Beirut, Lebanon in February, and began processing cases in Erbil, Iraq in December.

“Our expectation from the beginning was that the rate of Syrian refugee admissions would increase over time as referrals from the UNHCR increased, as we added to capacity,” Richards said.

US Citizenship and Immigration Services Director León Rodriguez emphasized that the increase in admittances did not mean that refugees were going through a less-rigorous screening process.

According to figures posted on the White House website, less than 1 percent of refugees make it through an initial UNHCR screening. They are then vetted by the US intelligence community — the FBI, DHS and State Department — in a process that can take up to two years.

The vetting process includes multiple interviews and database checks. Rodriguez said the officers who conduct the interviews undergo extensive training about legal definitions, country conditions, and interview techniques to detect credibility issues or security concerns. Syrian refugees go through an additional level of screening, which includes a more in-depth review of applicants’ histories, including their past social media postings. That screening occurs before the initial interview is conducted and can yield specific lines of questioning for each candidate.

“The interviews conducted by those officers are frequently extensive, probe credibility issues and probe particular bases of inadmissibility,” Rodriguez said.

Each applicant is also subject to cross-agency database checks, which can determine if they have been flagged by the FBI, the CIA or Department of Defense. The database checks occur before, during and after the application process.

Richards said the US should maintain its current pace of accepting Syrian refugees for the rest of the fiscal year, "so we may exceed 10,000."

"For next year, we will continue to welcome large numbers of Syrians, but it’s too soon to have a target figure established,” she said.

The US government has also also set up a process to promote family reunification for Iraqi and Syrian refugees who have relatives in the country. The program, called “Priority 2” or P-2, allows refugee applicants with relatives in the US to bypass the UNHCR screening. US-based family members can start an application on behalf of their relatives abroad via an I-130 petition for reunification. If that request is approved, family members then go through the same screening by US agencies as all other refugee applicants.

According to a State Department spokesperson, over 2,000 Syrians have been accepted for consideration via the I-130 program and are at various stages of processing. Only 20 individuals have been approved so far. None of them have arrived in the US yet.

While the US is now set to accept 10,000 Syrian refugees this year, the total pales in comparison to the numbers accepted by other countries. Canada resettled 25,000 Syrian refugees between November and February, according to government figures. Germany received more than 300,000 asylum petitions since 2011, while Sweden has taken more than 100,000 in the same time period, according to the UNHCR.

And UN figures show that the biggest burden has been carried by Turkey, Lebanon and Jordan. Jordan has taken in more than 650,000 refugees and Lebanon has absorbed over 1 million. Turkey hosts more than 2.7 million Syrian refugees, more than any other country.

The US has accepted more refugees in the past. In 1975, at the end of the Vietnam War, the US admitted 125,000 Vietnamese refugees.