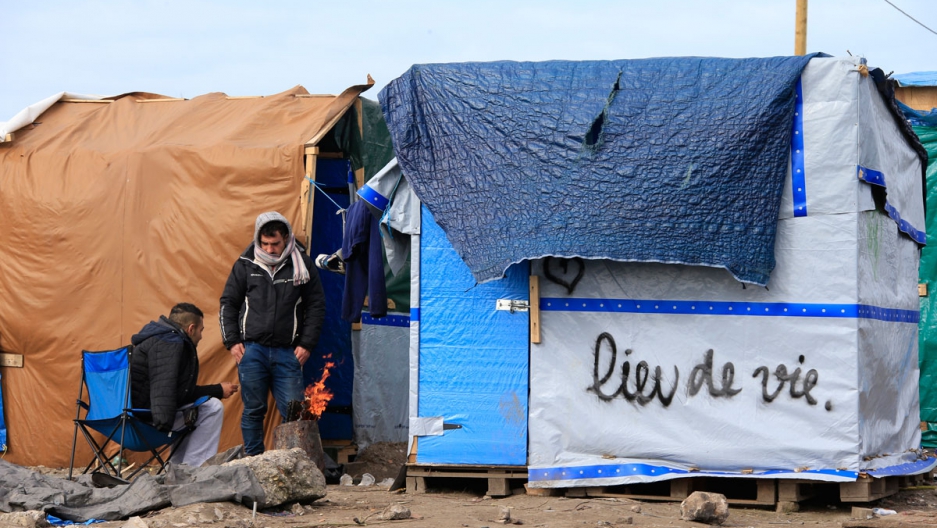 Migrants get warm near a fire outside a makeshift shelter with the message, "Place of Life."

Britain is to start building a wall in the northern French port of Calais to stop migrants jumping on trucks, under a deal agreed earlier this year, the interior ministry said Wednesday.

The barrier — four meters high, one kilometer long — will be built on a port approach road starting this month and should be completed by the end of this year, officials said.

The wall, which will be funded by the British government under an agreement struck at a summit in March, will complement a security fence already put up around the port and entrance to the Channel Tunnel.

"We are going to start building this big new wall very soon. We've done the fence, now we are doing a wall," Junior Minister Robert Goodwill told a parliamentary committee on Tuesday.

Green Party MP Caroline Lucas called the wall "monstrous" while campaign group Citizens UK asked Britain to use the money instead to transfer child migrants with families in Britain from Calais.

Richard Burnett, chief executive of Britain's Road Haulage Association, also told the BBC the plan was a "poor use of taxpayers' money."

He said funding for a wall "would be much better spent on increasing security along the approach roads."

The wall, which is expected to cost 2.7 million Euros ($3.0 million), will be the latest barrier to go up around Europe as the continent struggles with its biggest migrant influx in decades.

Hungary has built a reinforced fence on its frontier with Serbia and Austria has announced plans for a massive new fence along its border with Hungary in a bid to shut down the Balkan migrant route.

Republican White House hopeful Donald Trump has said he plans to build a wall along the border with Mexico funded by the Mexican government if he is elected.

Many commentators on Twitter drew comparisons with Trump's proposal, with one tweeter saying: "And now we're the United Kingdom of Trump."

The wall in Calais was agreed upon following tens of thousands of attempted Channel crossings last year by migrants sneaking onto lorries boarding ferries and the Eurotunnel.

Angry French truckers and farmers blocked the main routes in and out of Calais on Monday to call for the closure of the sprawling "Jungle" migrant camp.

The Jungle, a squalid camp of tents and makeshift shelters, is home to some 7,000 migrants but charities say the number might be as high as 10,000 after an influx this summer.

Migrants from the camp sometimes use tree branches to create roadblocks to slow trucks heading for Britain, their destination of choice.

When the trucks slow down, migrants try to clamber into the trailers to stow away aboard.

The drivers say despite the deployment of 2,100 officers around the port, the police are overstretched and unable to secure the roads.

French Interior Minister Bernard Cazeneuve promised during a visit to the Jungle last week to close the camp down "as quickly as possible" but said it would be done in stages.