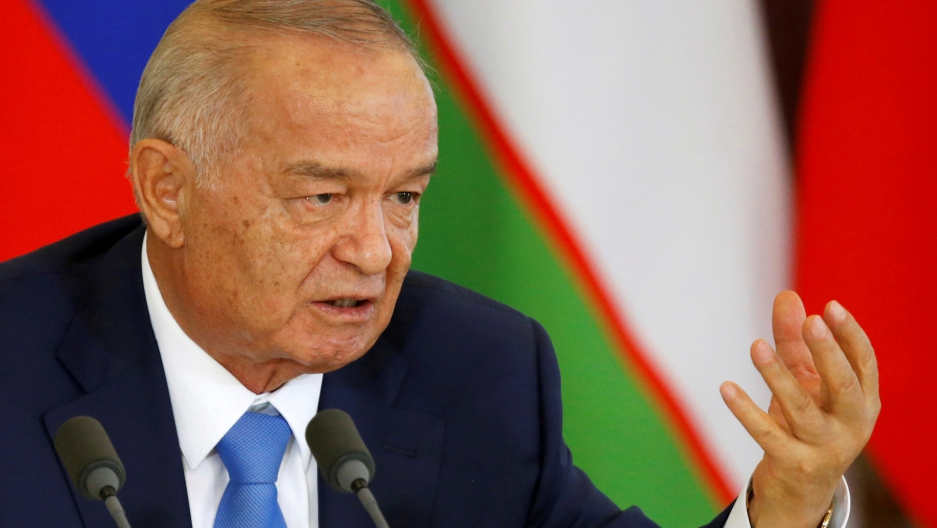 Strongman Uzbek President Islam Karimov, who has dominated the Central Asian nation for over 25 years, is in intensive care after suffering a brain haemorrhage, his younger daughter said Monday.

"My father was hospitalized after suffering a cerebral haemorrhage on Saturday morning, and is now receiving treatment in an intensive care unit," Lola Karimova-Tillyaeva, Uzbekistan's ambassador to UNESCO, wrote on Instagram of the 78-year-old leader.

She added that "his condition is considered stable" but that "at the moment it is too early to make any predictions about his future health."

Karimov's press service on Sunday announced that the Central Asian leader, long dogged by rumors of ill health, had been hospitalised, without giving details.

The former Soviet apparatchik, whose brutal crackdown on dissent has been widely criticized by rights groups, has been at the helm of the strategic country bordering Afghanistan from since before it gained independence from Moscow in 1991.

The wily leader has played Russia, China and the West against each other to ensure Uzbekistan avoided total isolation.

Kremlin spokesman Dmitry Peskov told journalists President Vladimir Putin was "deeply grieved by the illness of the Uzbek president" and was being kept informed of his state through diplomatic channels and the media.

"We value our relationship with Uzbekistan," said Peskov. "In this case we would really like to receive only positive news on the president's state of health."

Karimov lacks a clear successor after being re-elected to a fifth term in 2015 with more than 90 percent of the vote. The country has never held an election judged free and fair by international monitors.

Those tipped to rule in the case of Karimov's long illness or death include Prime Minister Shavkat Mirziyoyev and Deputy Prime Minister Rustam Azimov, Kamoliddin Rabbimov, an independent Uzbek political analyst based in France told AFP.

"I think in the corridors of power, they have already started fighting," Rabbimov said, while predicting the elite will be keen to ensure the transition is "more or less stable."

"On the one hand the political elite is fighting each other and regrouping but on the other, they understand they need to keep control of the country. They have gained massive wealth under Karimov."

Karimov's elder daughter Gulnara, a flamboyant figure formerly seen as a potential successor, was reportedly placed under house arrest in 2014 after she openly criticized officials and family members on Twitter.

Karimova accused her mother and younger sister of sorcery, compared her father to Stalin and attacked the country’s powerful security chief for corruption and harbouring presidential ambitions.

Gulnara was "hyperactive, but her ambition was not shared within the family, by her mother and sister," said analyst Rabbimov, while her sister Karimova-Tillyaeva has "no ambitions" for the presidential role.

Karimov's younger daughter, Karimova-Tillyaeva is based in Paris. She revealed in a 2013 interview that she had not spoken to Gulnara for 12 years.

Karimov grew up in an orphanage in the ancient city of Samarkand and went on to study mechanical engineering and economics. He rose up through the Communist Party ranks to head Soviet Uzbekistan in 1989.

Karimov has long been condemned by rights activists for his crackdown on dissent — most notoriously in 2005 in the city of Andijan, where government forces are accused of killing hundreds of demonstrators.

Facing a wave of international criticism over the alleged massacre, which Karimov's regime rebuffed, Tashkent shut down a US military base used to supply operations in neighboring Afghanistan since 2001.

The US State Department's 2015 human rights report highlighted Uzbekistan's "torture and abuse of detainees by security forces" and "denial of due process and fair trial."

Amnesty International in a report released in April this year said that there was "overwhelming evidence that torture continues unabated in Uzbekistan." But Uzbekistan has fiercely denied all the allegations against it and has staved off a complete rupture in relations by balancing the West against Russia.

US Secretary of State John Kerry met Karimov on a visit to the country in November while President Putin last held talks with him in Tashkent in June.