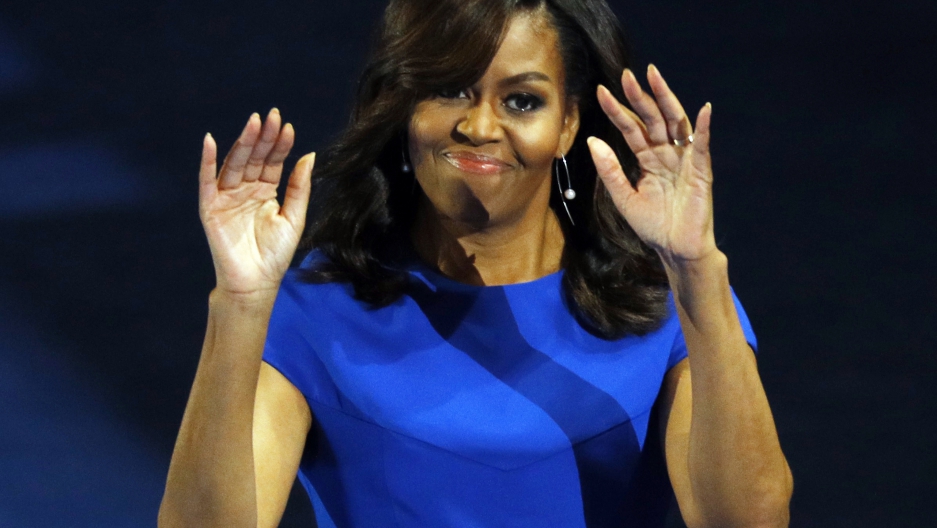 Nigerians seem to be parsing each twist and turn of the US presidential race.

And Chude Jideonwo, a Lagos-based media entrepreneur and lawyer, says his Nigerian friends on Twitter are trading thoughts today on just one topic.

"Everyone is unanimous, it's Michelle Obama for POTUS," Jideonwo says, adding that his Twitter feed was stocked with videos, photos and tweets from the first lady's speech at the DNC Monday night. "She was undoubtedly the standout."

Jideonwo admits his unscientific survey of opinions includes only Nigeria's digitally-connected set. But no detail of the Democratic National Convention seemed to escape him.

"We're here, saddened by those who were booing speakers at the DNC," he says. "It's almost as if it were our election."

Michelle Obama's description of her daughters playing on the lawn of a White House built by slaves resonated with many West Africans on social media. But Jideonwo says that eight years ago, when it was a head-to-head battle pitting Barack Obama against Hillary Clinton, he was with the white lady.

"I remember in 2008 being attacked on Facebook because even then I was a Hillary supporter. And people couldn't understand why a young black African could be supporting Hillary Clinton against the man who was about to be America's next president," he says. "I lost friends and I'm not exaggerating, I lost friends, people, there were invectives being transferred."

Books by US presidential contenders, like Donald Trump's "The Art of the Deal" and "Gifted Hands: The Ben Carson Story," remain popular with Nigerians. Asked why many of his compatriots, who are burdened with many of their own economic and political problems, bother to tune in to the US presidential contest, Jideonwo describes it as a bit like watching a riveting film.

"American elections are almost like movies — there's always a bad guy and a good guy. There's a very easy compelling narrative to kind of plug into. CNN is hugely popular, there are parts of the country where MSNBC is popular, Fox News is hugely popular," he says. "We have colorful characters that resonate with Nigerians of all stripes. It's no surprise that we are glued to these elections."