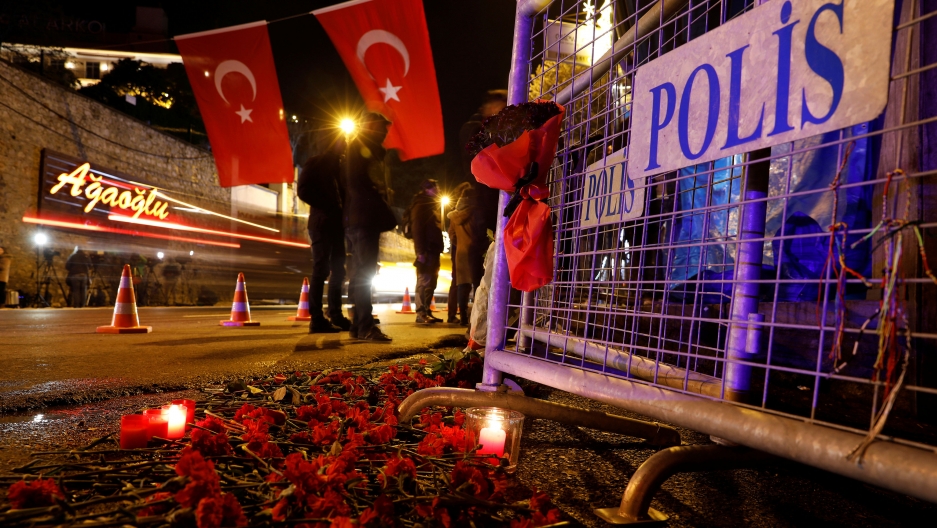 Police have erected barricades and mourners have left flowers outside Reina, the nightclub in Istabul where 39 died during a terrorist attack.

The attack inside an Istanbul nightclub on New Year's Day is the latest episode in a string of brutal terrorist attacks in Turkey, where terrorism has spiked since 2012. In 2016, 484 died in attacks, making it Turkey's deadliest year in this century for such violence, according to data compiled by media reports.

The latest attack, which happened just hours into 2017, killed 39 people. It comes on the heels of two other high-profile incidents in December. On Dec. 17, twin blasts killed 38 people, mostly police, in Istanbul. On Dec. 19, a gunman assassinated Russian Ambassador Andrei Karlov at an Ankara art gallery. Police are still hunting the New Year's Day attacker, but ISIS has claimed responsibility for the shooting rampage.

Data from the Global Terrorism Database (GTD), an open-source database run by a team of researchers from the University of Maryland, shows the country has seen an increase both in the number of terrorist incidents and in their level of violence. The GTD has yet to publish data for 2016, but after compiling information from media reports and comparing it to GTD data from prior years, we found that 2016 recorded the highest number of deaths by terrorist attack in Turkey in recent history.

The second chart only includes attacks with fatalities.

The GTD defines a terrorist attack as the "threatened or actual use of illegal force and violence by a non‐state actor to attain a political, economic, religious, or social goal through fear, coercion, or intimidation."

The dramatic surge in 2012 was largely due to the collapse of high-level secret talks in June 2011 between the Turkish government and the Kurdistan Workers' Party (PKK), a militant organization that waged an armed struggle in 1978 against Ankara to demand an independent Kurdish nation or to gain autonomy for Kurds in Turkey.

A ceasefire between March 21, 2013, and July 25, 2015, greatly reduced violence in that period. The high number of fatalities in 2015 was caused by attacks claimed by ISIS.

In 2016, violence caused by the PKK dropped, but attacks by ISIS and Kurdistan Freedom Hawks (TAK), a splinter group of the PKK, caused more deaths. The TAK attacks killed 136 people. They are grouped with other attacks by unknown perpetrators under the "others" category in the charts above.

Although attacks by ISIS began in just 2013, they have claimed 332 lives, making ISIS the second-deadliest terrorist group in Turkey. Many of their attacks have targeted civilians and tourists.

By comparison, attacks by Kurdish militants have often had specific targets like police and military personnel.