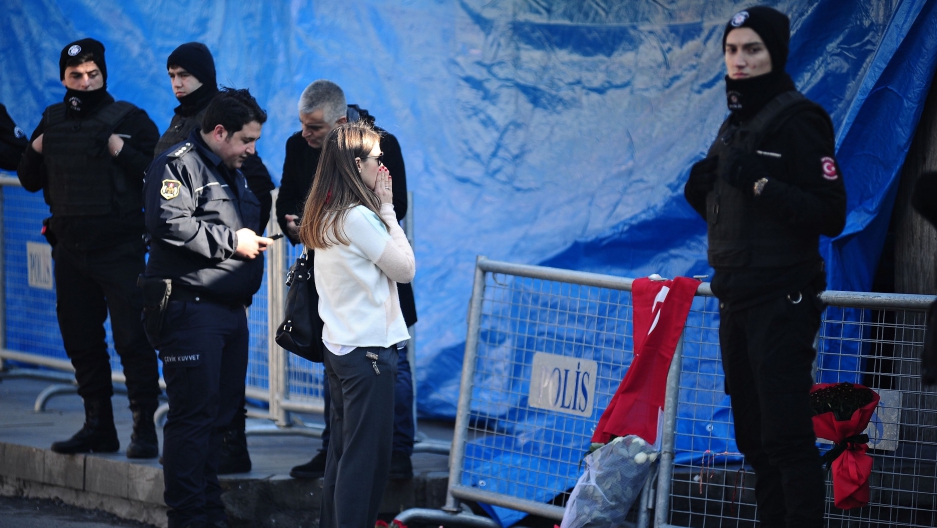 A woman is shown here on Jan. 2, as she reacts outside the Reina nightclub near the Bosphorus in Istanbul, which was attacked by a gunman on New Year's night.

The ISIS jihadist group on Monday claimed the shooting rampage inside a glamorous Istanbul nightclub on New Year's night that killed 39 people, as police hunted the attacker who remains on the run.

Anti-terror police made their first arrests in the attack, which unleashed scenes of panic among partygoers at one of Istanbul's swankiest venues and killed mostly foreign tourists.

The shooting took place just 75 minutes into 2017 after a bloody year in Turkey in which hundreds of people were killed in violence blamed on both ISIS jihadists and Kurdish militants.

In a statement circulated on social media, the jihadist group said one of the "soldiers of the caliphate" had carried out the attack on the Reina nightclub.

It accused Turkey, a majority-Muslim country, of being a servant of Christians, in a possible reference to Ankara's alliance with the international coalition fighting ISIS in neighboring Syria and Iraq.

This is the first time ISIS has issued a clear and undisputed claim for an attack inside Turkey, despite being blamed for several major strikes in Istanbul and other cities over the last year.

It has in the past, however, claimed individual assassinations of Syrian anti-jihadist activists in the south of Turkey.

The ISIS statement said the attack was in response to Turkey's military intervention against the jihadists in war-ravaged Syria the military presses a four-month incursion to oust jihadists from the border area.

In the last few weeks, the forces have encountered fierce opposition from the jihadists around the town of al-Bab. The army said Turkish warplanes launched new airstrikes around al-Bab.

Arriving by taxi at the plush Reina nightclub on the shores of the Bosphorus, the gunman produced a weapon, reportedly a Kalashnikov, and shot dead a policeman and civilian at the entrance.

According to the Hurriyet daily, the gunman then fired off four magazines containing a total of 120 bullets around the club, as terrified guests flung themselves into the freezing waters of the Bosphorus in panic.

But after changing clothes, the gunman left the nightclub in the ensuing chaos and has managed to evade security forces.

Interior Minister Suleyman Soylu said Sunday that intense efforts were underway to find the gunman, and expressed hope that he would be captured soon.

Late on Sunday, police rushed to Istanbul's Kurucesme district after a tip-off but the operation did not produce any arrest.

"So long as this terrorist is not seized we do not know when and where a massacre could take place."

The Dogan news agency said anti-terror police have detained eight suspects. But there was no indication of their relationship to the attacker.

Hurriyet said investigators believe the gunman may be from the Central Asian states of Kyrgyzstan or Uzbekistan.

The attacker may be linked to the same cell that in June carried out a triple suicide bombing and gun attack at Istanbul's Ataturk airport blamed on ISIS that left 47 people dead, the paper added.

Turkey also received intelligence from the United States on Dec. 30 warning of the risk of attacks by ISIS in Istanbul and Ankara on New Year's night, the paper said.

The pro-government daily Yeni Akit caused a furor on social media with a headline declaring the United States was the "number one suspect" over the attack.

President Recep Tayyip Erdogan, who said the nightclub bloodbath sought to sow "chaos," was on Monday due to chair a meeting of the Turkish cabinet.

NTV television said the bodies of 25 foreigners killed in the attack were to be handed back to their families on Monday following identification.

According to Turkish press reports, the latest figures show 12 Turks were killed in the attack alongside 27 foreigners, including one Belgian-Turkish dual national. Sixty-five people were wounded.

The foreigners who died — most of them from Arab countries and including Muslims — had come to the club to celebrate a special night in style.

They included three Lebanese nationals, two Jordanians and three Iraqis, officials in their respective countries said. At least one German was killed.

A Canadian woman, a Russian woman and a teenage Arab Israeli woman were also among dead. Turkish press reports said at least seven Saudi nationals died but this has yet to be confirmed by Riyadh.

The attack evoked memories of the November 2015 carnage in Paris when ISIS jihadists unleashed a gun and bombing rampage on nightspots in the French capital, killing 130 people including 90 at the Bataclan concert hall.

World leaders rushed to condemn the nightclub shooting, with Russian President Vladimir Putin saying it was "hard to imagine a crime more cynical than the killing of civilians during a New Year's celebration."