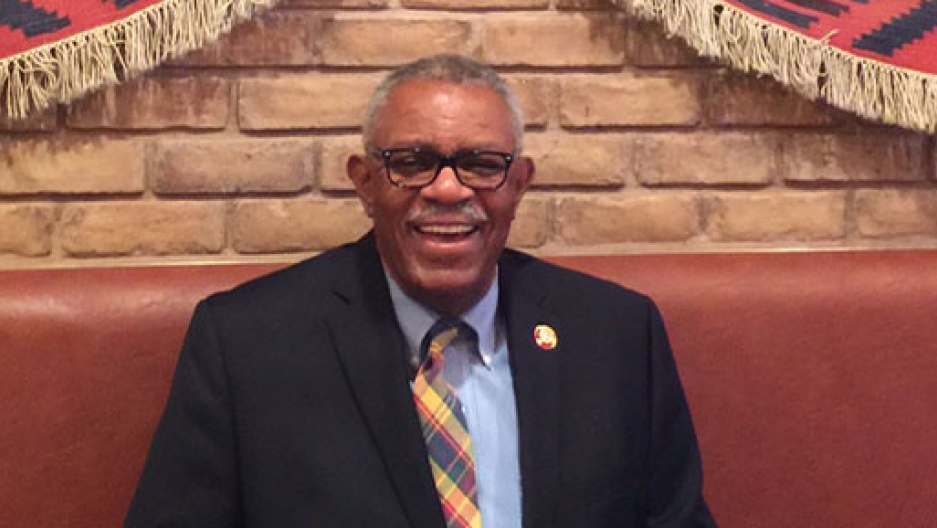 Jarvis Tyner has been a member of the Communist Party USA for over a half century. Now he's retiring from the Party staff.

We’ve been hearing a lot about “socialism” in this presidential election year, but what about communism? Most people assume the Communist Party USA collapsed along with the Soviet Union, but the Communists are still here. In fact, their headquarters are in the heart of Manhattan, on 23rd Street.

I admit it: I was hoping for plaster busts of Lenin, hammer-and-sickle flags — some good old fashioned Soviet kitsch. But the headquarters of the Communist Party USA is more like a hipster loft: clean and modern, with a conference room housed inside a free-standing glass cube. It took me 10 minutes of hunting to find the collected works of Lenin on a dusty shelf.

And there were more surprises: the eight-story party headquarters in Chelsea? The Communists own the building and it’s worth millions. That’s how they fund their work — by renting out office space in one of New York’s hottest zip codes.

“The party’s done really [well]. You know we have an investment fund? We're very good at that,” says Jarvis Tyner, a member of the party for 55 years and a leader in the movement for most of them.

“How did you get good at that?” I ask. “You're the Communist Party!”

“Because we understand capitalism.”

Tyner ran for vice president twice in the ’70s on the Communist Party USA ticket and spent time in all the Cold War hotspots: the Soviet Union, Cuba, Vietnam.

But it wasn’t geopolitics that first drew Tyner to communism. It was more about ... Dick Clark.

“You turn on bandstand, there was all white kids,” says Tyner, the younger brother of famous jazz pianist McCoy Tyner. “And they were dancing to often black artists. So we decided to challenge it.”

After graduating from high school in West Philadelphia and struggling to find a job, Tyner fell in with a group of community activists. One of their campaigns was to integrate the dance floor of American Bandstand.

Thing is, back then, being a member of the Communist Party was illegal. But for Tyner, who grew up poor in a segregated Philadelphia neighborhood, the idea of a future without poverty or racism — or even property — held a powerful appeal.

“So when they finally said, ‘You should join the Communist Party,’ I said ‘Yes, I want to join.’ But I thought I'd be in for a couple of months," he says, and laughs, "learn a lot of stuff and then go on with my life.”

But Tyner stayed. And the fact that most people here associated communism with dictators like Stalin or Pol Pot didn’t faze him.

In 1987, Tyner made a live appearance on Soviet state television in Moscow’s Red Square, spouting the party line.

“We didn’t know the things they were saying about Stalin were actually true,” he says now. “We thought it was propaganda.

“Yeah, we have Communist leaders who have made terrible mistakes.”

“We had to deal with the anti-Soviet bugaboo that was around our neck. And it went away,” he says. “We were able to function much better.”

But they had to figure who they were.

“So what are we doing now that the Soviet Union doesn’t exist?” he says. “And we're still fighting for socialism?”

And what they’re doing now is pretty similar to what they were doing in the ’60s.

Black Lives Matter, the fight for a $15 minimum wage, the struggle against gentrification are all movements the party is focused on today.

And, of course, the campaign of Bernie Sanders, who identifies himself as a democratic socialist.

“Bernie's doing a great job,” Tyner says. “Fifteen thousand people coming to hear him speak — you know, this known socialist. This is where we went, from the time we were followed just to go to a meeting, you know what I'm saying? This is where our country has come now.”

Today, the party has arrived at a different place too, which has led to a debate about whether they should even hang on to the word “Communist.”

Tyner thinks they should.

“I think it would be defensive to change the name, but other comrades feel differently. We're discussing it in a comradely way. But I think we would spend the rest of our time saying, ‘Oh, we are the Happy Time Party, but we used to be the Communist Party.’ You know, because people say, ‘Well, where'd you come from?’”

Answering that question would mostly fall to a new generation of Communists or Happy Timers or Bernie Sanderites.

In March, Tyner celebrated his retirement from the party.

He plans to spend time with his grandkids, take in some Broadway shows, travel.

Not that he’s giving up The Struggle, you know, moving society toward a theoretical future where there’s no such thing as money and all assets are shared.

But in the meantime, no one ever said Communists can’t have fun.