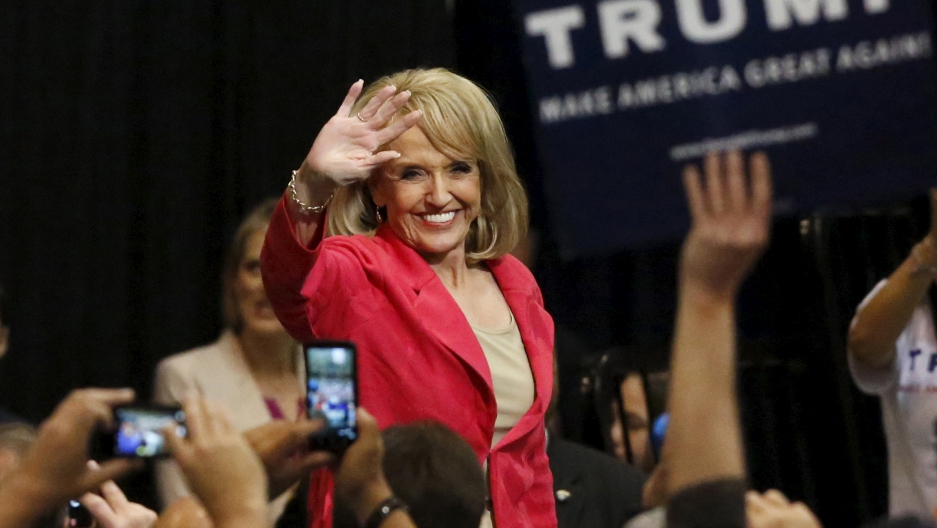 Donald Trump was counting on New York primary voters to boost his delegate count, and they didn't fail to deliver: The billionaire businessman won over 60.5 percent of Republican voters on Tuesday night.

Though Trump is ahead in the delegate count, if he does not secure the nomination in the first round at his party's convention in Cleveland this summer, the delegates he's won are free to vote for another candidate in the second round.

But there’s at least one delegate who has promised to support Trump at the convention this summer: Former Arizona Gov. Jan Brewer.

“He's going to make a huge difference," she says. "He's a breath of fresh air, I might say.”

Governor Brewer says that since Trump has “been through the red tape” while trying to do business in the United States, he is prepared to lead the country.

“I support Donald Trump and have been working hard for him — I think he will serve our country well, and I enjoy him,” she says. “I think he has a successful record as a businessman, and I think he will bring great economic growth to our country, which we are badly in need of, and be a job creator.”

Governor Brewer has no problem with Trump’s tough stance on immigrants. In fact, she signed a 2010 immigration bill that gave police officers broad powers to arrest anyone they suspected of being undocumented, though the Supreme Court invalidated that part of the law two years later.

More: As governor, Brewer joined a lawsuit against Obama's executive action on immigration. It was heard Monday in the Supreme Court.

In 2016, Governor Brewer also believes that a wall must be erected along the US-Mexico border, and that America's neighbors to the south should be financially responsible for it.

"I believe that there's many different ways that he can get payment out of Mexico in regards to the wall," she said. "Certainly, as everybody knows, I've been after the federal government for years to secure our border and stop all this illegal immigration and the drug cartels from coming through. Arizona happens to be the pathway for all of this. You talk to the border patrol, you talk to the ranchers down south — they will tell you that they’re pouring through."

Like Trump, Governor Brewer claims that hordes of criminals are invading America. But according to reports from the Wall Street Journal and the American Immigration Council, immigrants are actually less likely than native born citizens to commit crimes and be incarcerated.

Additionally, she argues that undocumented immigrants are creating a huge financial burden for the American people, who wind up paying for their educational and medical services. However, the New York Times reports that the US Social Security Administration shows that undocumented immigrants “contribute about $15 billion a year to Social Security through payroll taxes. They only take out $1 billion (very few undocumented workers are eligible to receive benefits).”

Some have said that Trump’s stance toward immigrants and Mexicans is hateful, but Brewer doesn’t see it that way.

“I don’t think it is hatred,” she says. “I grew up in the southwest, I’ve got Hispanic people who are in my family, they’re our neighbors, they live here, they’ve come here legally, and we love them.”

Recent data and analysis from the US Census Bureau, the Mexican National Survey of Demographic Dynamics, and the Pew Research Center show that the number of undocumented immigrants coming from Mexico to the US continues to decline. When confronted with this information, Brewer digs in her heels.

“Well, that’s your opinion,” she says.

When pressed further, she doesn’t budge.

“[If you] believe what the government is telling you, that’s great, but I’m telling you that from the Border Patrol — not only here but in other states — that I’ve spoken with, it hasn’t” slowed down, she says. “The cartels never slow down ... The sex trafficking, the drugs, the extortion – it’s bad for America, and it’s illegal.”

Donald Trump believes that Islam is at war with the West, and that America must respond by barring people of that faith from coming to the United States.

“Donald J. Trump is calling for a total and complete shutdown of Muslims entering the United States until our country’s representatives can figure out what the hell is going on,” Trump said in December. “We have no choice.”

But when asked if she agrees that the US should block all Muslims from entering the country, Brewer claims that Trump’s words are being manipulated and that he does not really want to ban all Muslims.

“That’s your interpretation of what he’s saying,” she says. “I believe he’s saying we need to take a long pause, and overwhelmingly the people of the United States agree with that.”

Governor Brewer says that America must take a “long pause” and establish better vetting processes for anyone looking to come to the US, adding that “the doors are not open.”

“The bottom line is that we want to be safe — our people in the United States deserve to know that their government is going to protect us, and we’re not just letting people into our country who we all know, if they’re radical Islamic terrorists, they do hate us and they do want to kill us,” she says.

Governor Brewer is prepared to stand by Trump because she says she knows that he’s not a racist or a bigot.

“I know that he wants to do what’s right for our country,” she says.