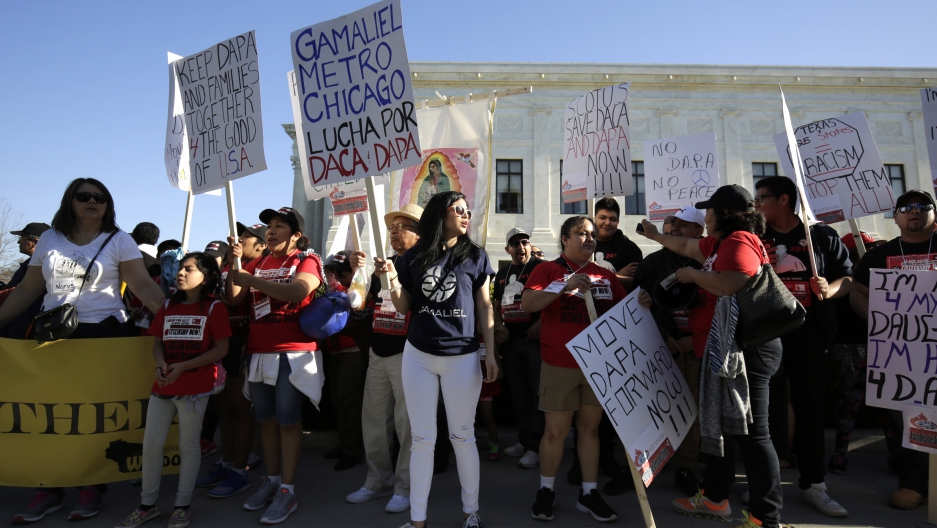 This morning, immigration activists rally outside the US Supreme Court as justices hear arguments in a challenge by 26 states over the constitutionality of President Barack Obama's executive action to defer deportation of certain immigrant children and parents who are in the country illegally.

Maria Bilbao and her family had a lot of hope when President Barack Obama announced executive action to expand programs to give many undocumented immigrants a way to temporarily live and work in the US without so much fear.

The Deferred Action for Parents of Americans and Legal Permanent Residents program, commonly known as DAPA, was scheduled to start in May 2015 and would have granted certain undocumented parents, like Bilbao, temporary relief from deportation and employment authorization. But the program was put on hold by a federal court.

The case is being argued today in the Supreme Court. The New York Times reported that lawyers were facing tough questions about their cases from the justices.

“It’s as if the president is defining the policy and the Congress is executing it. That’s just upside down,” Justice Anthony M. Kennedy said to Obama's top lawyer.

Justice Antonin Scalia's death in February has added an extra layer of uncertainty for those awaiting a ruling. A tie, which is now more possible, would let stand an appeals court ruling that blocks the expanded DACA and DAPA program from taking effect.

Former Arizona Gov. Jan Brewer signed onto the suit when she was still in office, and she also passed an immigration law that gave police officers broad powers to arrest people they suspected of being undocumented immigrants. But the Supreme Court partially invalidated that law, including a provision that made it a crime to be in Arizona without legal status.

"We've never seen a president act so outlandishly with regard to executive orders," says Brewer, a Republican. "He's been a failure.” 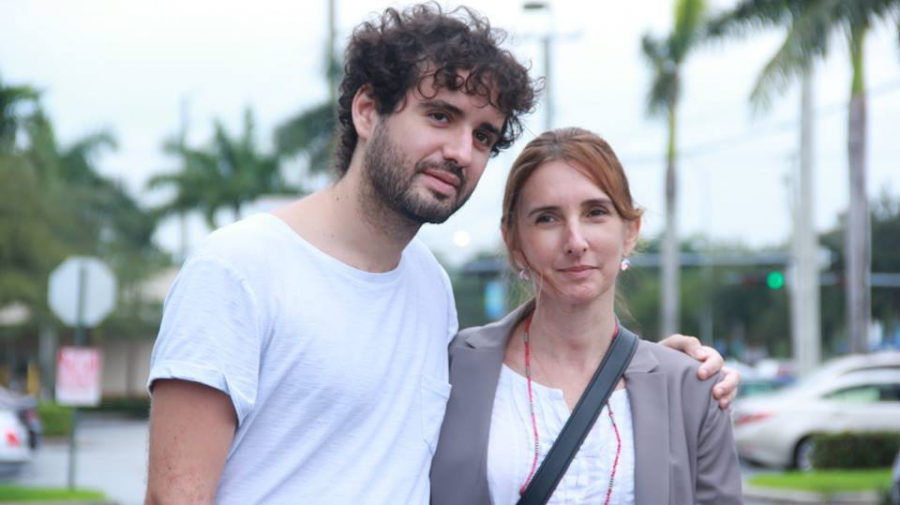 Thomas Kennedy and his mother Maria Bilbao have been advocating for immigrants for some time. Here they are last year, at an event to protest state immigration laws that were introduced in Florida.

Bilbao is a domestic worker in Miami. Her son, Thomas Kennedy, is an activist with the Florida Immigrant Coalition and a legal resident. This makes Bilbao and her husband eligible for DAPA. Which is why, she says, she is in Washington, DC, today to show her support for the Obama administration's case.

When they arrived 15 years ago, Bilbao says her family hoped to find opportunities unavailable to them in their native Argentina. The country was in the grips of major economic depression. They had relatives who are US citizens and thought they would be able to join them.

"We came here thinking it was going to be easy, but when we came here, it wasn't like that," Bilbao recalls. A lawyer told her that it would take 22 years to get a green card to come to the US legally. They decided to stay, undocumented.

"We just want an opportunity," she says. "We want a chance to live, work and stay without fear of deportation. And we know that the law is on our side."

Join: How important is the DACA and DAPA program to you? Discuss in the Global Nation Exchange on Facebook.

A study by the Migration Policy Institute (MPI) and the Urban Institute found that some 3.6 million undocumented parents with citizen or lawful permanent resident children could be eligible for DAPA if it goes forward.

Marc Rosenblum, formerly of MPI and now leading the Office of Immigration Statistics with the Department of Homeland Security, says there is a lot of academic research about why these parents migrate in the first place. What it's not about, he says, is gaining US citizenship.

"There's no academic research that says people migrate to have children, to make sure their children have citizenship," Rosenblum says. Rather, it's most often about wages, jobs and economics. Children cannot sponsor their parents as legal residents until they turn 21. "It's pretty bizarre to think that people have that kind of timeline in mind," Rosenblum says. 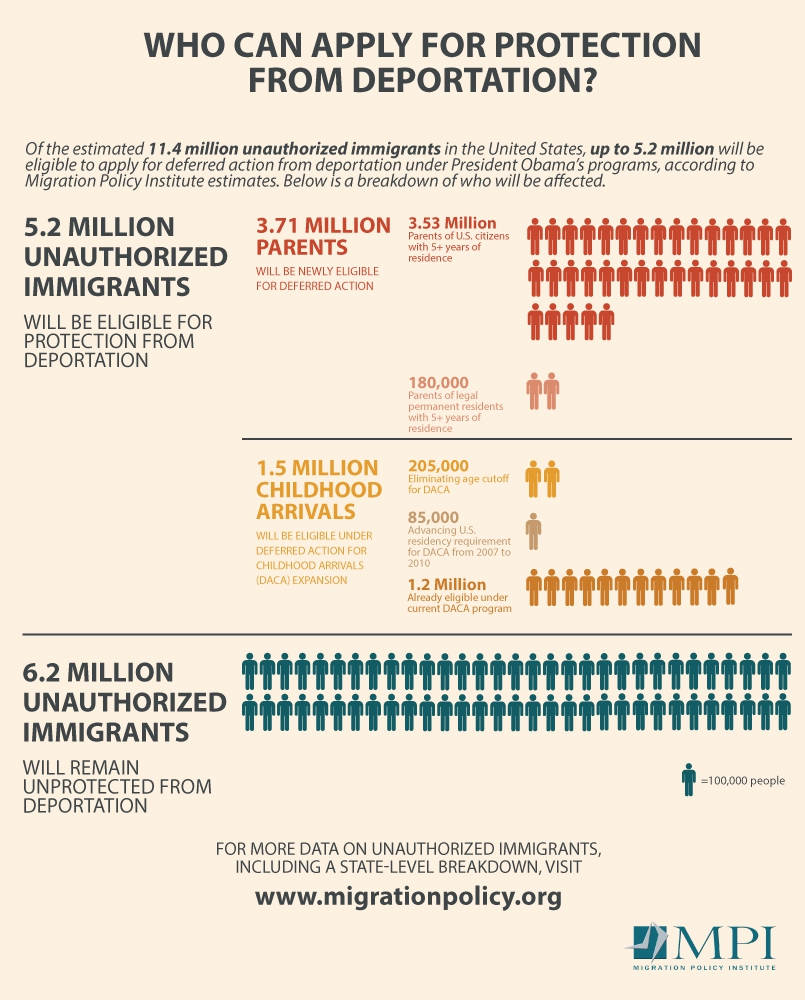 More undocumented immigrants are having children in the US, though. Rosenblum says this has much more to do with the changing demographics of the migrant population — more women and families, as opposed to men who come alone — than a desire to move for citizenship. President Ronald Reagan's 1986 act to give legal status to many undocumented immigrants and tightened borders meant more men who migrated to work ended up staying in the US, and brought their families. Opportunities for women to work, often in hospitality and domestic work, have also increased.

Another MPI report estimates that 46 percent of undocumented immigrants are women and 33 percent have a child who is a US citizen or lawful permanent resident.

The upshot of all this is that Bilbao is not alone in looking for relief — even if it's temporary. Bilbao has been a domestic worker for 12 years and feels that she and others deserve respect for their contributions to society.

"So many undocumented immigrants take care of families, provide food and love and care for children," she says. She looks forward to the day that she and her husband can have access to health insurance, and can work and drive without fear of being deported.

Her son, Thomas Kennedy, says he is fighting for the DACA and DAPA programs, but hoping for more, namely immigration reform with a pathway to citizenship for many of the country's undocumented immigrants. This executive action is the best option at the moment, but it's still riddled with uncertainties

Even if it goes forward, it could be dismantled by the next president. There are also many undocumented immigrants who do not know how to navigate the application process or simply do not want to risk coming out of the shadows for a temporary solution.

"It's really sad that that small measure of relief, for people who work so hard and are such an integral part of the labor force in this county — that is all we can get? It's definitely not enough," says Kennedy.

But for this battle, Kennedy and Bilbao are optimistic.

"We believe we are going to win. Let's hope that the Supreme Court is on the right side of history on this," Kennedy says.