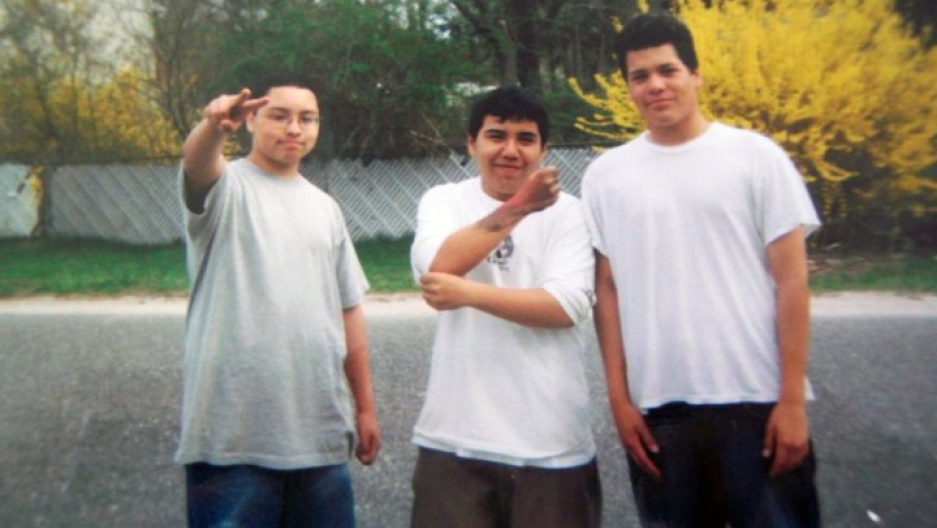 Hendel Leiva, left, with his friends in Brentwood, New York in 2003. His family moved to Brentwood to live in a peaceful neighboorhood, but gang violence soon became a problem at local schools.

In 2003, while I was growing up in Brentwood, New York, a suburban town on Long Island, my hometown underwent a dramatic cultural shift. My high school classmates suddenly became obsessed with a 28-year-old hip hop artist from ‘Southside’ Jamaica, Queens.

It’s been 13 years since the release of 50 Cent’s debut album, "Get Rich Or Die Tryin," which to date has sold more than 8.4 million copies. To me, though, the album is a reminder of  a time in my hometown where music began to imitate life: Gang violence became the norm.

My family’s story is similar to many of Brentwood’s current immigrant families. My mother came to the US from Ecuador in the early 1980s for better career opportunities. My father had been traveling back and forth from Guatemala to different parts of the US since the 1970s, undocumented and looking for work to send money back home. My parents got married and lived in Jamaica, Queens, where I was born in 1988. We moved to Long Island when I was about 5. My mom says that she didn't want us growing up in neighborhoods that were prone to drugs and crime.

So we moved 40 miles to Brentwood, in Suffolk County. Our house was in a middle class neighborhood that was a mixture of white, black and Puerto Rican families. The demographics were shifting though; within a couple of years, there was an influx of families from El Salvador, who were fleeing violence in their home country at the end of a decade-long civil war.

When I was growing up, Brentwood did not have a strong “community identity” like other towns on Long Island; we were simply suburbia. We didn’t have a “Latino” identity like neighborhoods in California or Texas, and we weren’t considered a prosperous community like the ones shown on WB shows like “7th Heaven” and “The OC.” Still, our school had a typical social hierarchy: jocks, popular kids, band kids, goths, bullies, geeks, nerds (me!) and “losers.” Our school was a reflection of what we saw on MTV’s Top 10 Total Request Live: a mixture of Good Charlotte, Fabulous and Eminem.

When 50 Cent’s first hit single, “In Da Club,” was released in January 2003, the song instantly landed on top of nearly every music chart locally and nationally. It was a departure from other hip hop. It wasn’t just catchy hooks and backup dancers, it wasn’t Nelly’s “Dilemma” or Usher’s “U Don’t Have To Call.” It was a new braggadocio, an aggressive style that raised up a “bulletproof” 50 Cent. (In 2000, he famously claimed to have survived a shooting that left him with nine bullet wounds. More recently, the legitimacy of that claim has been questioned.)

“In Da Club” was embraced by teenagers in Brentwood. Everyone I knew, the Latino kids and the white kids, were all spinning the disc in their Walkmans, and were singing lines from the song. 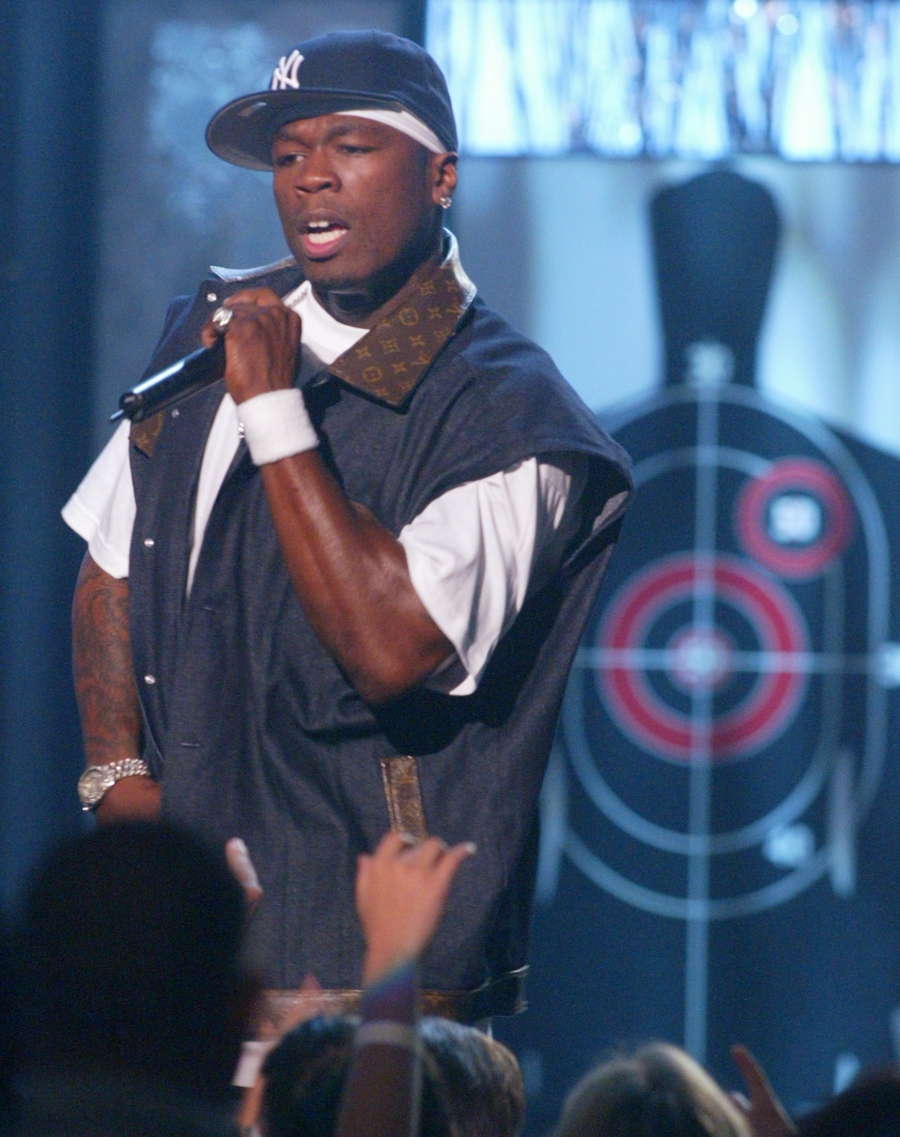 “Any living thing that cannot co-exist with the kid/ must decrease existing, little n---a now listen/ Your mammy, your pappy, that bitch you chasin'/ Your little dirty a-- kids, I'll f-----g erase them.” —from “Back Down”

At Brentwood High School, the new “in fashions” were throwback basketball jerseys, New Era fitted baseball caps and low hanging jeans — and anyone who was not trying to fit in was socially ostracized. It wasn’t far from 50 Cent’s self-promotional style. His diss records — sometimes as a joke and sometimes more seriously — threatened violence to anyone who posed a threat to him.

“How To Rob” threatened violence towards the entire music industry including artists such as Lil’ Kim, P. Diddy, Whitney Houston, Brian McKnight and Busta Rhymes.

And bullies at Brentwood High School were no longer just bullies: They became aggressors with ties to violent inner city groups. School fights were no longer fistfights. They became all out brawls that ended in 20-person melees. It became common to hear rumors and reports of arrests on school grounds, with the occasional gun or pocketknife involved.

In the beginning, I wanted to be a part of the trend. I tried to sag my jeans and I wanted to buy from Eminem’s Shady clothing line. But I couldn’t afford it, which made me an even bigger target for these newly minted “gangsta” bullies. At my worst, I joined a group of friends and we drove by a group of undocumented day laborers shouting obscenities and harassing them with what we thought at the time were comical threats of deportation. We were projecting the same harassment we were experiencing, except we did it to the most vulnerable people in our community. I'm now an immigration activist, and I'm sometimes ashamed when I explain this to people. But it's part of my story.

Parents of first-generation Salvadoran American teenagers in my community were unprepared to discipline this new generation, aggressive at home and defiant in school. The parents had two choices: Ignore the growing influence of gang culture or return to their native countries with their children. My family struggled and so did others in the neighborhood.

In 2008, my senior year of high school, a rumor emerged that an extremely dangerous gang was preparing to launch a violent attack on the school: I remember many students staying home out of fear.

My friend, Ecuadorean-born Eric Valeriano, was also a Brentwood High School student at the time. He remembers:

“...I saw more gang violence in Brentwood than I saw in Queens, as funny as that sounds. But it was true. I was a bit more scared to get caught in the middle of a fight just for walking along the hallways of Brentwood than I was at Bryant High School in Queens. The song [In Da Club] showed 50 Cent being a part of the G-Unit [collective], which instead of portraying a brotherhood, it portrayed a violent group. A lot of these little gangs in our community emulated that. You couldn’t say something or look at someone in a bad way because you were too afraid of getting ‘jumped’. I remember that rumor when a gang was going to attack the school. My butt stayed home. Nothing happened, but when people talked, or there was a rumor about a fight, it usually happened, so I was definitely not going to run the risk of an attack.”

In 2010, when I was 21 and in college, the violence hit close to home. As part of a surge of violence that overtook Brentwood, one of my brother’s closest friends, Juan Rosario, was murdered in his driveway. It was at that point that I became involved in community activism. I joined an effort to drive violence down by helping the local police department establish a community watch group.

But the violence continues. In March, gang members were convicted for assault and intimidation at Uniondale High School, about 20 miles west of Brentwood. They were recruiting recently arrived Salvadoran refugee children to join MS-13. These reports make me question if parents and administrators will ever be able to protect students from the deeply entrenched drug and gang violence that I remember.

Now when I turn on the TV, I see Donald Trump contributing to dividing our neighborhoods, much like 50 Cent did with the teenagers at my school. We live in a time where you either support Black Lives Matters or you don’t, you support law enforcement or you don’t, you support immigration reform or you denounce it. The middle ground is hard to find.

Trump has insulted Latinos, Muslims and women. He has encouraged violence against protesters at his rallies, which in turn has created the “Trump effect” of fear and hostility, according to the Southern Poverty Law Center.

To me, Trump’s candidacy for president looks a lot like 50 Cent’s hip hop career. The more high-profile feuds, the more they test how far their supporters will be moved by language of violence and anger. And the more they push, the more they resist taking responsibility.

But here’s the reality check — and hope.

50 Cent’s follow-up album to “Get Rich Or Die Tryin,” “The Massacre,” was a failure. Kanye West’s critically acclaimed ”The College Dropout” and “Late Registration” along with his personal story of surviving a near fatal car accident, inspired young people like me to pursue their education and career dreams. When 50 Cent and West challenged each other to an album release showdown in 2007, West’s “Graduation” passed 50’s “Curtis” by 300,000 sales.

Last week Donald Trump visited Patchogue for a GOP fundraiser, a very controversial decision by Long Island GOP leadership that decided to host him. The event was 1000 feet from where Marcelo Lucero was killed in an attack by seven Patchogue-Medford High School students in 2008. I was part of the protests by more than 150 Long Islanders who peacefully decried this latest insult by Trump and his supporters. It was a personal insult to all the people who contributed to help the town heal from a time when racial tensions over immigration led to violence.

Even if Trump’s campaign to “Make America Great Again” is just a one-hit wonder, the insults Trump has hurled at Mexicans, Muslims and women will leave a mark. Just as my hometown of Brentwood and surrounding neighborhoods continue to struggle with a gang-related crime, defeating Trump at the polls doesn’t mean we’ll see the end of taunting in schools. The bullies have been emboldened, and it will take time to undo the damage.

Hendel Leiva is an immigration reform advocate. He hosts the YouTube show The @HendelMedia Project, where he discusses immigration with other activists.