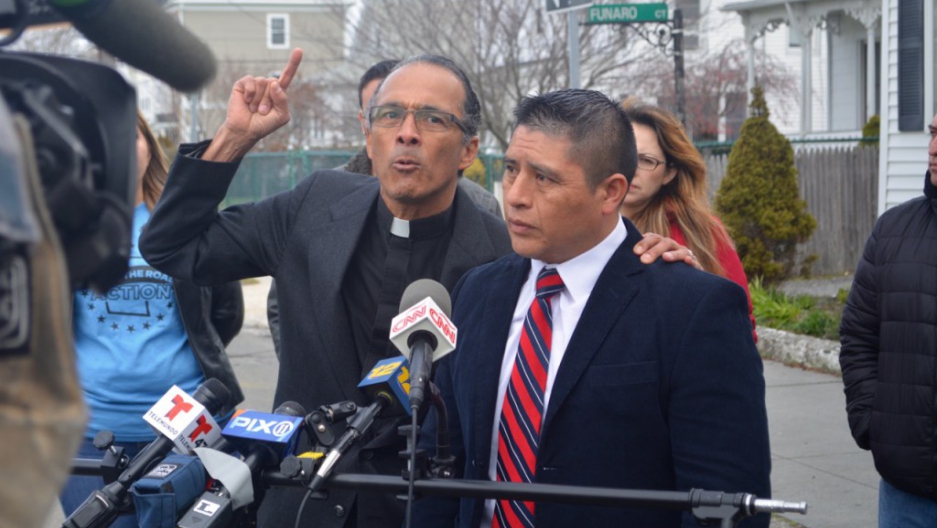 Calling Donald Trump “a symbol of hate against my community and the immigrant community in general,” the brother of murdered Ecuadorean immigrant Marcelo Lucero asked that Thursday’s planned Trump visit to Patchogue be called off.

The presidential primary spotlight falls on New York State next Tuesday. On the Republican side, the polls show Donald Trump in the lead, which is not surprising, because Trump's a New Yorker.

But one place where Trump is not welcome is Patchogue.

Patchogue is a village on the south shore of Long Island. Trump's scheduled to hold a fundraiser there on Thursday — and a group of immigrant advocates hope to stop him.

The controversy stems from a hate crime that was committed in Patchogue back in 2008. According to police investigations and court testimony at the time, what happened was a 37-year-old Ecuadorean immigrant named Marcelo Lucero had gone out with a friend in the village of Patchogue. He and his friend encountered seven teenagers who had been roaming the streets, looking for chances to harass or beat up Latino immigrants.

The encounter near the railroad tracks in Patchogue quickly turned into a confrontation. Lucero and his friend were basically surrounded and assaulted. Incidents of this kind had been occurring in nearby communities for a while.

“Maybe the difference was that Marcelo Lucero tried to fight back,” says reporter Víctor Ramos, who’s been investigating the story for Newsday. “He took off his belt and started swinging at the teenagers who were attacking him, he hit at least one of them in the face. That angered the teenager more and he took out a knife and basically stabbed him, cutting an artery and a vein, and Mr. Lucero was left there bleeding on the ground and died that night, either on the way or arriving at the hospital.”

The attackers were arrested the night of the incident. All seven were convicted and the lead attacker was charged with a hate crime and sentenced to 25 years in prison for first-degree manslaughter.

So you might ask what does this hate crime and murder of an Ecuadorean immigrant have to do with a Trump fundraiser in 2016?

Here’s how reporter Víctor Ramos sees the tension. He says immigrant advocates have done a lot of work in Patchogue to promote healing, and to better understand why the deadly incident happened, and to move past it. Ramos says Trump’s visit to Patchogue could tear the community apart:

“People feel that with Trump coming to the village and basically taking part in a fundraiser that will be a short walk away from the site where Marcelo Lucero was stabbed opens up old wounds and the way in which Trump addresses immigration brings back the rancorous tone of the immigration debate before the Lucero incident took place.”

Immigrant advocates aren’t imagining this stuff. They point to Trump’s vehement anti-immigrant political rhetoric. They point out that Trump launched his presidential campaign calling Mexicans "rapists," he has talked about deporting the country's estimated 11 million undocumented immigrants, and he emphasizes building a wall between the US and Mexico. So they feel strongly that Trump should stop with the hate speech, and shouldn’t attend any fundraiser in Patchogue.

Not everybody wants to block the event, however. “There are people in the village of Patchogue who believe this is an issue of free speech, that Trump should be able to come to the village and address supporters," Ramos adds.

But if he does go, activists plan to hold a peaceful vigil to embrace the cause of the many Latino immigrants who Ramos says are now estimated to make up more than 30 percent of Patchogue's population.

Anti Trump forces say GOP rally Thursday has "no place" in Patchogue where LI man was killed in '08 pic.twitter.com/lwcrQGkz1o

Another way to understand the tense connection between Trump and Patchogue is to read what the surviving brother of Marcelo Lucero, Joselo Lucero, has written in a letter to Newsday. For Joselo, Trump’s intention to come to Patchogue for a campaign fundraiser represents a flashback to a painful time in his life, and the violent death of his brother:

“Every November since that hate-filled night, friends and community members have gathered with me for a peaceful vigil at the spot where Marcelo fell. Now, a short distance north of that spot, supporters of the Suffolk County Republican Party will gather at a nightclub for a fundraising event. The guest of honor — in my mind, the guest of dishonor — will be Donald J. Trump. His appearance should serve as a wake-up call for the immigrant community.”