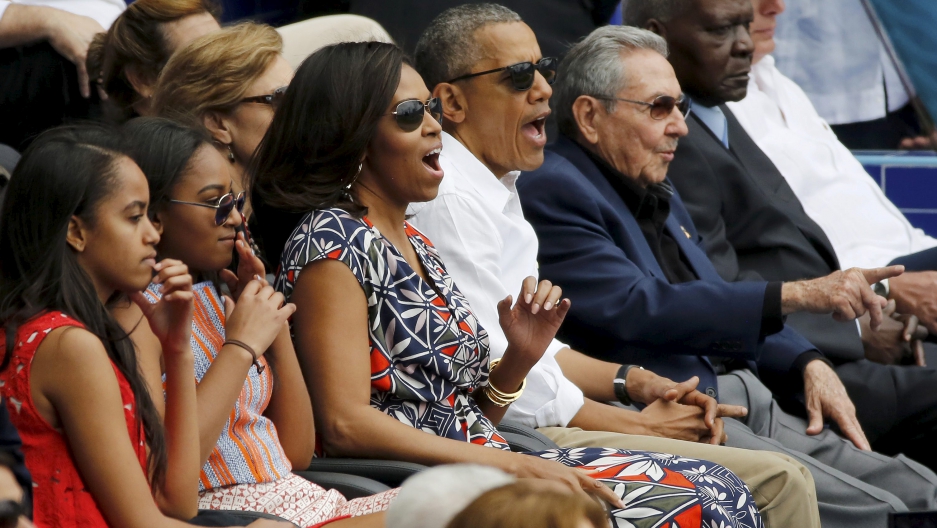 President Barack Obama and his family with Cuban President Raul Castro at an exhibition baseball game between the Cuban National team and the MLB Tampa Bay Rays in Havana.

It was as close as Cubans would come to experiencing a 'Tear down this wall Mr. Gorbachev' moment during the Obama visit.

It came in a speech delivered from the ornate Gran Teatro de la Habana. The US leader looked up from the stage, and urged Cuban officials in their balcony seats to tolerate dissent. It echoed for some the Cold War-era address President Ronald Reagan delivered to his Soviet counterpart in 1987.

"Citizens should be free to speak their mind without fear, to organize and to criticize their government and to protest peacefully," Obama said in the much-anticipated speech. "The rule of law should not include arbitrary detentions of people who exercise those rights."

Tom Hudson, special correspondent for WLRN in Miami, watched the event with Cubans in Havana. Hudson says Obama was reaching out to three audiences.

"One was the Cuban people, not only inside this barque grand theater in Old Havana, but also Cuban people spread across the island. I think the second audience was in the balcony, it was Raul Castro and and the Cuban government — the revolutionary government that he and his brother led and he represents.  And thirdly, it was Cuban Americans in south Florida, and Cuban Americans throughout the country back home in the United States."

Obama's speech included some accolades for the Cuban government, especially when he spoke about Cuban doctors deploying to impoverished corners of the globe. Those mentions received a friendly applause in the Havana theater, according to Hudson.

And the US leader told Cubans they no longer needed to fear threats from Washington.

"Given your commitment to Cuba's sovereignty and self-determination, I'm also confident that you need not fear the different voices of the Cuban people and their capacity to speak and assemble and vote for their leaders," Obama told Cuban leaders.

And one line received a standing ovation.

That was when Obama called for an end to the US embargo of Cuba, a trade prohibition that's strangled Cuba's economy since it was imposed by the Eisenhower Administration in 1960.