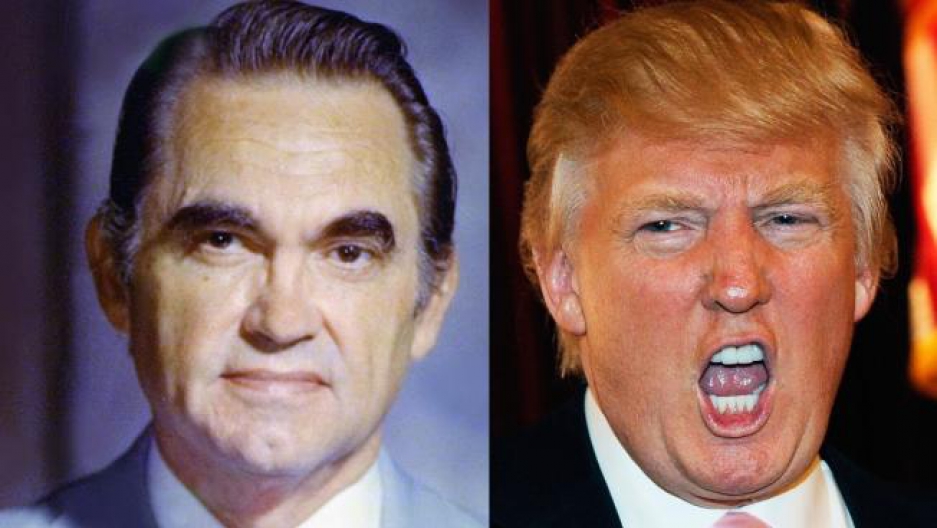 But until the last couple of weeks, it’s safe to say George Wallace was not a name that resonated with most regular folk. Now, though, it’s as if the long-departed Southern politician has risen from the dead.

Quicker than you can say "Throwback Thursday," George Wallace’s political history has gone viral — with any number of analysts citing the similarities between him and his heir apparent, Donald Trump. Both — they point out — are outsiders, not embraced by political party leaders. Both figured out how to tap citizen anger. And both spread their messages in messianic rallies.

George Wallace came to power in the segregated South of the 1950s, with an all inclusive populist message. The NAACP endorsed his first campaign and he lost. But he rode to victory in his next campaign on the catchy vicious slogan, "Segregation today, Segregation tomorrow, Segregation forever."

In 1963 Wallace was inaugurated as Governor of Alabama; during the civil rights years, he was the face of white resistance, including his famous "Stand in the School House Door" to stop integration at the University of Alabama. Wallace first took his brand of race-tinged politics national in 1964, and then in 1968 when he ran as a third party presidential candidate.

Like Trump today, Wallace leveled sharp attacks against groups and policies — singling out — "pseudo-intellectuals," "liberal left- wingers," "he who looks like a she," and "busing your children where they don’t want to be bused." And, like Trump, Wallace’s rallies often devolved into brawls between supporters and protestors with Wallace yelling, "Well, you come for trouble and you got it."

However, unlike Trump, George Wallace did not pretend to be unaware of the bigoted groups who embraced him. They were as welcome into his tent as were the enthused voters reveling in Wallace’s saying out loud what many dared not to. That, of course, is what draws so many people to Trump, including the self-described white supremacists who claim him.

The Occupy Democrats website captured recent Twitter chatter of Trump followers talking about organizing a militia to defend Trump supporters against those who are “Communist and Zionist.”

Donald Trump says there will be riots if he doesn't get the Republican nomination. Certainly it wouldn’t take much to spark it, given the highly charged atmosphere at his rallies. George Wallace himself was a victim of a rambunctious rally in 1972, his third presidential bid. He was shot, paralyzed and spent the rest of his life in a wheelchair.

Shortly thereafter he publicly repudiated his offensive comments and actions. Even calling up civil rights leaders asking for forgiveness and appointing African-Americans to offices. Count me as one of those who remained unconvinced, though he tried hard to demonstrate sincerity when I interviewed him for the documentary series, "Eyes on the Prize."

Instead, I came away thinking that he was desperate not to be remembered on the wrong side of history.

If the Wallace-Trump comparison plays out, then perhaps the racist circus that is the Trump campaign is all an act. Maybe Trump will show the intelligent thoughtful side that many claim he possesses. Maybe, but at this juncture, I don’t think so.