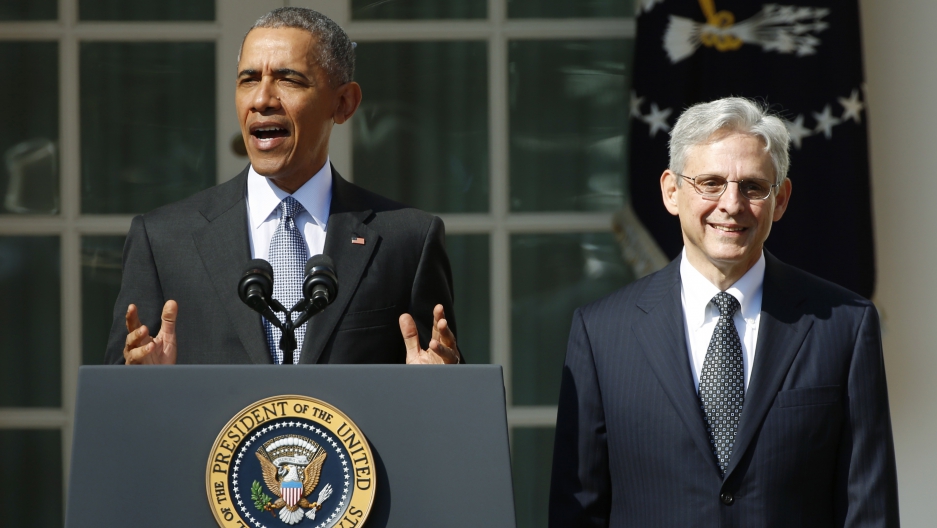 US President Barack Obama announces Judge Merrick Garland, right, as his nominee to the U.S. Supreme Court, in the White House Rose Garden in Washington, March 16, 2016.

Merrick Garland, the Chief Judge of the United States Court of Appeals for the District of Columbia Circuit, will be President Barack Obama's nominee for the opening on the US Supreme Court created by the death of Justice Antonin Scalia earlier this year.

Garland, who emerged from a field of attorneys and appeals court judges, first joined the US Circuit Court of Appeals in 1997 by President Bill Clinton.

In announcing the nominee, Obama called him even-handed and fair, saying he has "earned respect from both sides of the aisle." Obama also said he was uniquely qualified to serve "immediately."

Of course, both of those statements are a nod to the tough fight, perhaps even an impossible fight, Garland will face to get past the GOP-controlled US Senate, particularly the Senate Judiciary Committee led by Sen. Chuck Grassley, who voted against Garland's initial nomination to the court.

Garland, a Chicago native, graduated from Harvard Law and clerked for two federal judges, including Supreme Court Justice William Brennan, and eventually joined private practice. Some time later, though, he joined the US Justice Department as a federal prosecutor.

"He quickly made a name for himself going after corrupt politicians and violent criminals," Obama said. "He oversaw some of the most important criminal prosecutions of the 1990s, including overseeing every aspect of the federal investigation into the Oklahoma City bombing."

RELATED: What happens when you're nominated, but not confirmed. One story.

The nomination will begin a lengthy lobbying effort by Obama and Democrats to get Garland onto the court — or at least get a hearing in the Senate. They've even launched a dedicated Twitter account — @SCOTUSnom — to share "the facts on President Obama's Supreme Court nominee and the nomination process."

Garland was effusive in his praise for his nomination, comparing it favorably to marrying his wife and having a daughter.

"For me, there could be no higher public service that serving as a justice of the Supreme Court," he said.

Garland credited his family, including immigrant grandparents, for putting him on a path of service, and giving him the moral compass Obama praised in nominating him.

For their part, Republicans say an election year is no time for a Supreme Court nominee, insisting that whomever is elected in November deserves the right to fill the position vacated by Scalia. The nominee is expected to be a hot-button election issue this year.