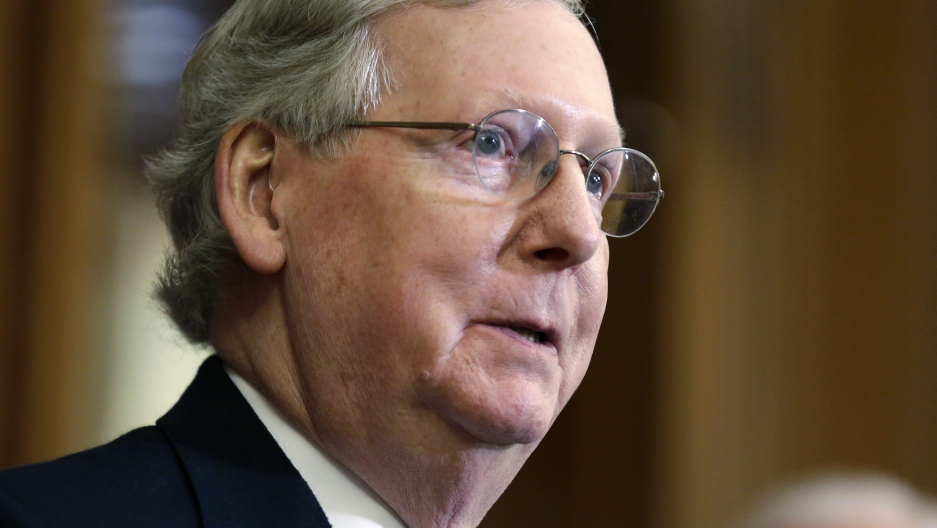 US Senate Majority Leader Mitch McConnell will play a key role in determining whether President Barack Obama's Supreme Court nominee gets a hearing.

The death of Supreme Court Justice Antonin Scalia is turning the race for the White House into a battle over the US Constitution — and the US Senate.

Just hours after his death was announced on Saturday, the 2016 candidates began arguing over whether President Barack Obama should nominate a successor for Scalia, a duty given to the president by the constitution.

Republican Senate Majority Leader Mitch McConnell says he will block any attempt by Obama to nominate a Supreme Court justice —  a move that is largely welcomed by the base of the Republican party. But, according to Takeaway Washington Correspondent Todd Zwillich, such a plan could hurt Republican senators facing tough re-election campaigns in moderate states and disrupt the GOP’s chances of holding onto its relatively thin 54-46 majority in the Senate.

“They have to be worried, because this is a big complication with potential risks and potential rewards for re-election, not to mention the presidential [campaign],” he says.

Come November, at least five Republican senators will have to defend their seats from Democratic challengers in states that President Obama won — twice.

“People like Rob Portman in Ohio, Kelly Ayotte in New Hampshire, Ron Johnson in Wisconsin, Pat Toomey in Pennsylvania, didn’t say anything at first,” says Zwillich. “Since, each of them has said, ‘No, no, I’m on board. This is a good idea; we should wait until there’s a new president to consider a new Supreme Court nominee because the stakes are just too high.’”

Republican Senator Mark Kirk, who represents President Obama’s home state of Illinois, faces a tough race for re-election and has not yet said whether he will back McConnell’s decision.

“The most important senator in all of this, of course, is Ted Cruz, the Republican conservative of Texas who’s in a battle with Donald Trump for the presidential nomination,” Zwillich says.

“Ted Cruz is really the one leading this charge that says, ‘We will not consider any Obama nominee,’ and not just in the primary,” says Zwillich. “This is Cruz’s theory for the general election: ‘I don’t need moderate voters; I don’t need six percent in purple states. I am going to rally evangelicals and other conservatives to my cause.’”

But Obama and the Democratic Party may be taking Cruz’s stance into account. Zwillich says it is possible that the president will intentionally pick a moderate, centrist nominee — if he were to do so and Republicans blocked the nominee anyway, the party may wind up appearing radical and unreasonable.

“That could be a huge advantage for a Democrat,” he says. “You can see lots and lots of risks and benefits woven all through this thing.”