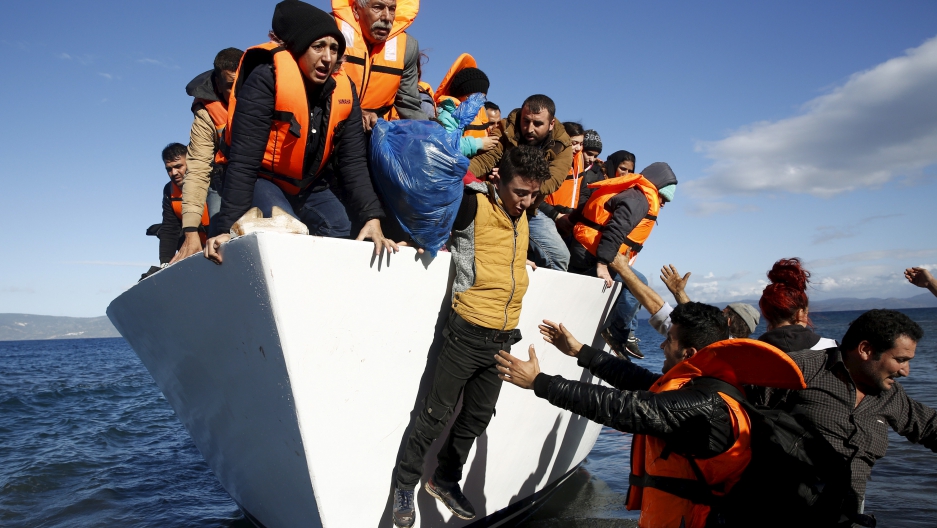 Refugees and migrants jump off a boat as they arrive on the Greek island of Lesbos, November 26, 2015.

There is a metaphor so embedded in the discussion of refugees and migrants that everyone from Donald Trump to Barack Obama uses it. The New York Times has put it in headlines, and Rush Limbaugh has wielded it like a hammer in his full-throated style.

It’s the image of refugees or migrants as water, as in “waves of refugees” or “the flow of migrants.” It can also become a “flood” or a place can be “swamped” by recent arrivals. Professor Gregory Lee at the University of Lyon calls this the “inundation metaphor.” His research has led him to conclude that it has racist, xenophobic baggage and should generally be avoided.

We know this at PRI because Lee didn’t hesitate to point it out to us on Twitter.

@pritheworld 'flowing', like 'waves', an emotively charged word pertaining to racist imaginary which sees people as a "flood". Pls avoid it.

Lee came to this conclusion while studying media about the Chinese Exclusion Act of 1892. The bill, which was the first law to ban a specific ethnic group from immigrating to the United States, was passed amidst a fervor of anti-Chinese immigrant sentiment.

“I noticed that the press had been instrumental in bringing about that shift in public opinion, and so I started looking at elements of language that were recurrent,” Lee says.

The common theme he found in the news and popular culture of the time was the “trope of inundation,” as he described it in an academic paper published in 2007. Over and over again, “unwanted immigrants of color” were described as "pouring in," "swamping," "flooding in," or as “as coming in ‘tides’ and ‘waves.’"

One example he cites is a New York Daily Tribune report from Sept. 29, 1854. The piece refers to the growing Chinese migration as an "Asiatic horde" and weaves in the flood metaphor:

They are pouring in upon California. Their great companies are shipping them to that region by thousands as coolies... Already there are 40,000 there, and the cry is still they come. If the tide continues they must yet outnumber whites on the Pacific; and they are not like the European immigration to the Atlantic States, for they have no sympathy with Americans, whether in religion, habits or language.

As Lee dug deeper, he found other examples of the same imagery being used in explicitly racist and xenophobic contexts. German sociologist Klaus Theweleit, for instance, studied the role of the indudation metaphor in the rise of facism and Naziism. A passage from one particularly prominent fascist writer, Edwin Erich Dwinger, described Germany after its defeat in World War I like this:

The whole world poured out over Germany: Americans and New Zealanders, Australians and Englishmen, Portuguese and French. The bitterest pill to swallow was the stationing of blacks everywhere by the French: Moroccans and Senegalese negroes, Indochinese and Turks.

Fast-forward to now, and the metaphor is still being used in full force.

“We have no idea who these people are. When the Syrian refugees are going to start pouring into this country, we don’t know if they’re ISIS, we don’t know if it’s a Trojan horse.” - Donald Trump on “This Week,” Nov. 22, 2015.

And it's not just being used in conservative circles. President Barack Obama has himself used the “inundation metaphor.”

“....even without ISIL, even without al Qaeda, instability will continue for decades in many parts of the world — in the Middle East, in Afghanistan, parts of Pakistan, in parts of Central America, in Africa, and Asia. Some of these places may become safe havens for new terrorist networks. Others will just fall victim to ethnic conflict, or famine, feeding the next wave of refugees.” President Obama, State of the Union, Jan. 13, 2016.

There are, of course, degrees. “Flow” is generally less aggressive than “wave,” and wave is mild compared to “flood,” but Lee maintains that that the metaphor should be avoided all together. He cites an article published last September in the the Los Angeles Times by Pulitzer Prize-winning cartoonist David Horsey as a particular egregious example.

When comparing the current refugee crisis to historic ones, Horsey wrote: “Today’s much larger crisis could be the first gush of a human tsunami that will swamp the continent.” The accompanying cartoon depicts Europe as castle, whose outnumbered defenders are surrounded by a dense cloud of people labeled “refugees” and “immigrants.” The outsiders have a speech bubble that reads, “Let us in,” while the castle’s defenders are saying, “We need a bigger moat.”

Horsey is generally not an anti-immigrant writer or cartonist. He has lampooned anti-immigrant sentiment in the US, and in one striking image, compared Trump’s singling out of Muslims to the treatment of the Jews in Nazi Germany. But Lee argues, at least in the September cartoon, he should have been more sensitive to the larger discourse. He would say the same of PRI when we’ve used terms like “waves” or the “flow” of refugees.

“It’s not a question of if it’s incorrect. It’s a question of how it reinforces an image of people, in this instance, immigrants or refugees, which can then be twisted and manipulated by people,” Lee says. “There is this whole set of words that just become banal and seem to be normal. We have to remember that it is a metaphor. People don’t flood, and people don’t flow. People migrate, they move, they arrive, they pass through, they travel.”

There are, though, people who are just as vigorous in their defense of refugees who disagree. Sonny Lê, a 51-year-old Oakland resident, was among the first so-called “boat people.” About 2 million refugees left Vietnam from 1978 through the mid 80s. Many were ethnic Chinese fleeing persecution. Lê was only 15 when he boarded a boat in 1980, and spent nearly two years in refugee camps in Singapore and Indonesia before resettling in the US.

While attending a nearly all-white high school in Clayton, a suburb east of San Francisco, he was mocked and bullied for being “VC” or “Viet Cong,” even though he fled the Vietnam to avoid being drafted to fight for the communist regime.

Lê finds that little has changed in how the situation for refugees is framed. He finds words like “hoard” or “swarm” to be clearly derogatory, but he takes a more nuanced view of the “inundation metaphor.”

“I would object to 'flood,' but wave has been used so much I don’t think it has the same sting as 'hoard,' because when you have a massive group of certain individuals come in a certain given time, figuratively, a wave seems to describe it. ... I don’t have any problem with that term,” he says.

But what about Lee’s argument that just using the metaphor reinforces a negative stereotype?

“We can sit here and philosophically wax about it, but listeners, they don’t really get that far. When it’s on the news, in the news story, the average news consumer isn’t going to make that connection,” Lê says.

One journalist who has done a lot of thinking about the language media uses when talking about migrants and refugees coming in search of asylum by boat is Ben Doherty, the Guardian’s correspondent in Australia. From 2008 to 2011 he was a reporter in Southeast Asia, where he often covered refugee crises and forced migration, such as the the Hmong fleeing Laos, the Rohingya's exodus from Myanmar and the flight of Tamil people from Sri Lanka. In Austalia in 2014, he found the refugee issue was increasingly at the center of political discussion there, and not always in a good way.

"It was very apparent that the language was being used to manipulate public opinion, to frame and shape the direction of the discourse,” he says.

When it comes to the “inundation metaphor,” Doherty cautions against being too prescriptive, and creating rules about which words writers can and cannot use. Instead, he urges journalists to think carefully about the words they use. Last year, as a visiting fellow at Oxford, Doherty wrote a paper that details the history of “The semantic struggle over seeking asylum in Australia.” Many of the issues will be familiar to people who follow the immigration debate in the US, such as the tension over the use of the word “illegals” to describe immigrants who arrived in the country illegally.

“If someone’s an 'illegal,' as a government, it gives you not only the right but also the imprimatur to then detain someone, to lock them up, or to send them for offshore processing, because this person has done something wrong,” he says. “If you describe someone as an asylum seeker, they are someone looking for sanctuary. So the language, I think, actually provides a framework that you can then create a government policy around.”

That's one area where Gregory Lee, Sonny Lê and Ben Doherty all agree — this discussion, about the language we use when we talk about refugees and migration, is an important one to have.

“Language matters, and that’s why you need to be precise, and break it down and explain it in a way that people understand it, without having to make assumptions about what you say,” Lê says. “You have to consider what comes out of your mouth. As the saying goes, your tongue is connected to your heart.”

You can join a discussion of the metaphors we use to describe migration in the Global Nation Exchange on Facebook.