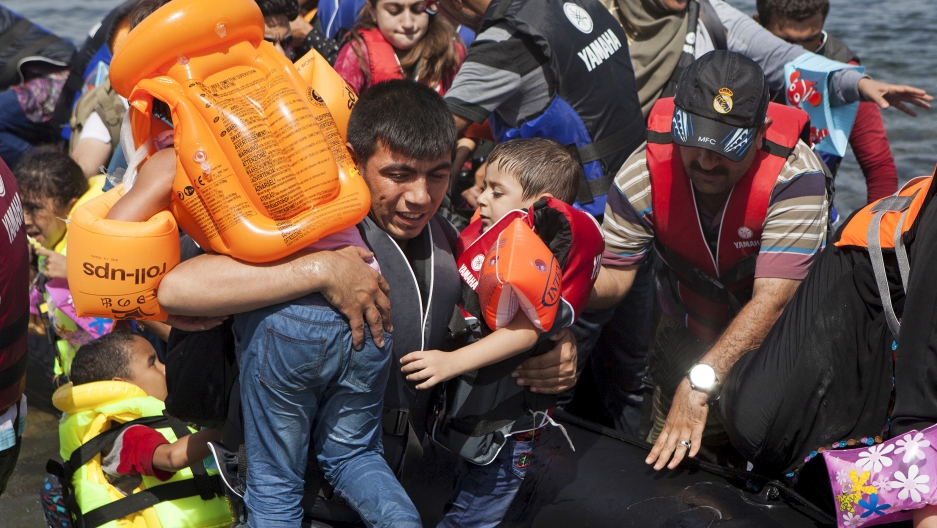 A Syrian refugee carries two children after arriving on a dinghy on the Greek island of Lesbos, September 7, 2015. Greece is struggling to cope with the hundreds of migrants and refugees from the war in Syria making the short crossing every day from Turkey to Greece's eastern islands.

European leaders are trying to manage the massive influx of refugees from the Middle East and Africa. Last week, British Prime Minister David Cameron said he wasn't sure how many newcomers Britain could handle.

“We have taken a number of genuine asylum seekers from Syrian refugee camps and we keep that under review," he said. "But we think the most important thing is to try to bring peace and stability to that part of the world. I don't think there is an answer that can be achieved simply by taking more and more refugees.”

That very day, the image of a dead Syrian toddler on the shores of Turkey startled the world and and demonstrated the seriousness of the refugee crisis. The next day, Cameron reversed his position.

“Today I can announce that we will do more providing resettlement for thousands more Syrian refugees,” he said during a press conference.

Besides the humanitarian imperative to help refugees who are risking death to make it to Europe, there also might be an economic incentive to help asylum seekers. According to Philippe Legrain, economic adviser to the president of the European Commission from 2011 to 2014, migrants and refugees could provide an economic boon to a greying Europe.

“Roughly speaking, Europe’s working-age population is shrinking by about 1 million people a year, and the number of retired people is increasing by about 2 million people a year,” says Legrain. “These asylum seekers and refugees can play a very valuable role as workers, as taxpayers, and very often as innovators and entrepreneurs who can boost growth and help cope with an aging society.”

Some argue that asylum seekers, migrants, and refugees may steal away jobs from European citizens. But Legrain says that the numbers simply don’t support that notion.

“The number of asylum seekers arriving is larger than before, but in the context of a European population of more than 500 million, the fact that 340,000 people have arrived without permission is relatively manageable,” he says. “In fact, it’s 0.07 percent of the EU population.”

Legrain, a visiting senior fellow at the London School of Economics' European Institute and the author of “European Spring: Why Our Economies and Politics Are in a Mess — and How to Put Them Right,” says that economic studies overwhelming show that new arrivals have virtually no impact on the wages paid to local citizens.

“For the most part, they don’t compete directly in the labor market with local people — they do different jobs,” says Legrain. “And they don’t just fill jobs, they also create them when they spend their wages.”

On the whole, Legrain says that Europeans should be looking at refugees as economic contributors.

“In Europe, the demographic trends are more dramatic than they are in the [United] States, and we have much more generous government pension systems and therefore the impact on public finances is much greater,” he says. “Like most migrants, the people arriving in Europe now are mostly young. Clearly they are brave and enterprising since they’ve risked their lives in order to get to Europe. They’re just the sort of people you’d want to welcome into society because they’re people who are not only seeking refuge in Europe, but are also trying to better their lives and get ahead.”

So what will it take to convince Europeans that refugees are an economic asset? Legrain says that the continent should follow Germany’s example, which has agreed to take in at least 500,000 asylum seekers a year for several years.

“There is a realization there of the economic benefits of migrants to an aging and shrinking population,” he says. “Germany has the oldest population in Europe, and its population has been falling quite rapidly for the past decade, so there’s much greater awareness there than in other places. I think perhaps that Germany is the wave of the future.”