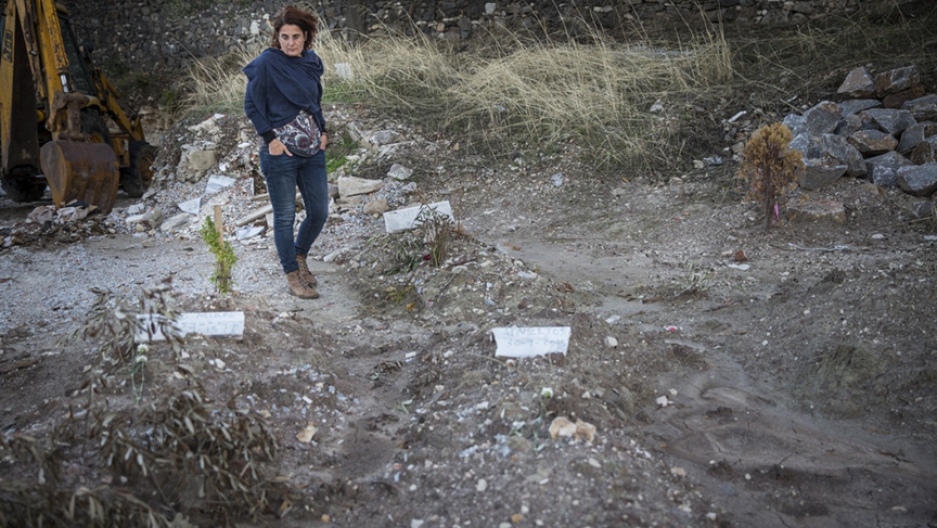 Efi Latsoudi, a longtime advocate for immigrant rights on Lesbos, at the Saint Panteleimon cemetery, where dozens of people who died trying to cross the sea to Greece have been buried over the past years.

There’s no more room to bury the dead. Sypros Galinos, mayor of the Greek island of Lesbos, announced the main cemetery's area reserved for refugees who have drowned at sea is full.

For us, the ocean gives us strength.  We fish in it, swim.  The sea is our home.  It should bring life, not death. -- Ilias Maravas

The situation symbolizes the despair this island feels at being at the epicenter of Europe's migration crisis — and having dead bodies washing up on its shores. Fifty-five more bodies sit in the morgue. 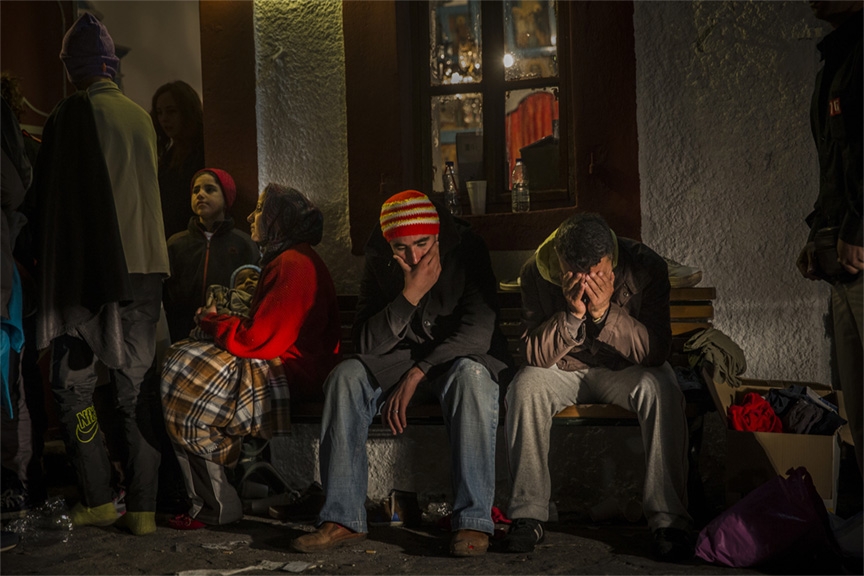 Survivors of a boat crash on October 28 gathered at Port of Molyvos; some had lost relatives. At least 11 people died and dozens are still missing.

Ilias Maravas, a reporter for Greek ERT TV here, was the first to find two dead children on the beach two days after a trawler heaped with migrants sunk in high seas between Lesbos and Turkey last week. Two hundred and forty two people were rescued; 43 are confirmed dead with an unknown number still missing.  Pointing to his computer, Maravas said: “This is full of 10 months of pictures of dead people. I don’t ever want to see this again.”

Maravas told me that locals are deeply disturbed by corpses in the sea. “For us, the ocean gives us strength.  We fish in it, swim.  The sea is our home.  It should bring life, not death.”

The people of Lesbos will express their sorrow and rage on Wednesday at an interfaith service with Greek Orthodox, Catholic and Muslim clergy to honor the refugees who have died at sea. It will be held in the old port of Mytilene under the statue of the Asia Minor Refugee Mother, a reminder of another time of suffering, in 1922, when desperate Greek and Armenian refugees fled Turkey and sought refuge on this island, much like the refugees today. The mayor will call for three days of mourning and also action to stop the traffickers. 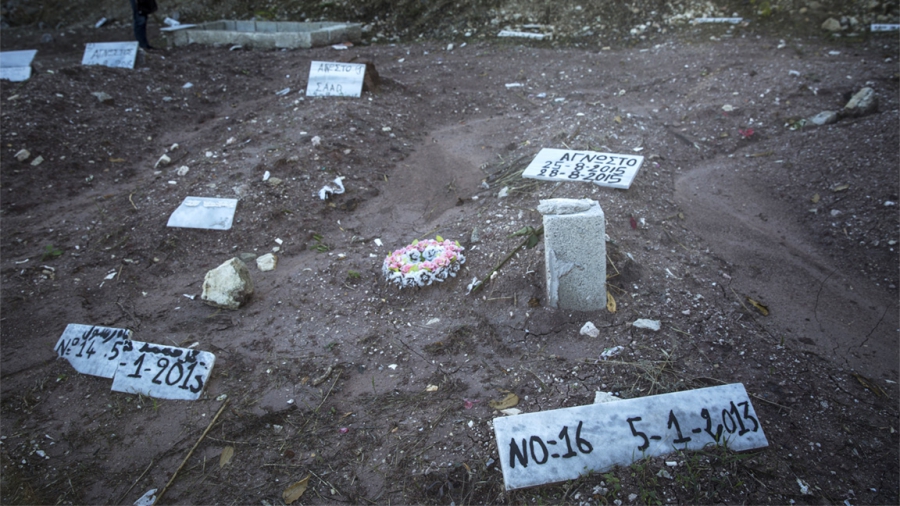 The Saint Panteleimon cemetery on Lesbos, where dozens of people who died trying to cross the sea to Greece have been buried over the past years.

Efi Latoudi, a founder of the grassroots refugee support group Village All Together, has been organizing funeral and burial services for refugees since 2012. Today’s flow of refugees to the island is massive but Lesbos has been a destination for refugees and migrants for over a decade and local authorities have had to contend with many dead bodies.  “But this summer it became a nightmare.  There was something every day, and very tragic situations — mothers who were breastfeeding who had lost their children. It was a nightmare.“

I met Latoudi at PIKPA, the small refugee camp in Mytilene designated for vulnerable people who are ill or injured or who have lost loved ones. She pointed out some Afghan families sitting nearby; they had lost a mother and several children on October 20, a few days before the big shipwreck.  “The mayor found five places so they could bury their relatives last Sunday.”

“But before when we thought there was no space in the cemetery they were fainting, they were crying.  Now that their loved ones are buried they are calmer. They at least have the possibility to slowly move on.” 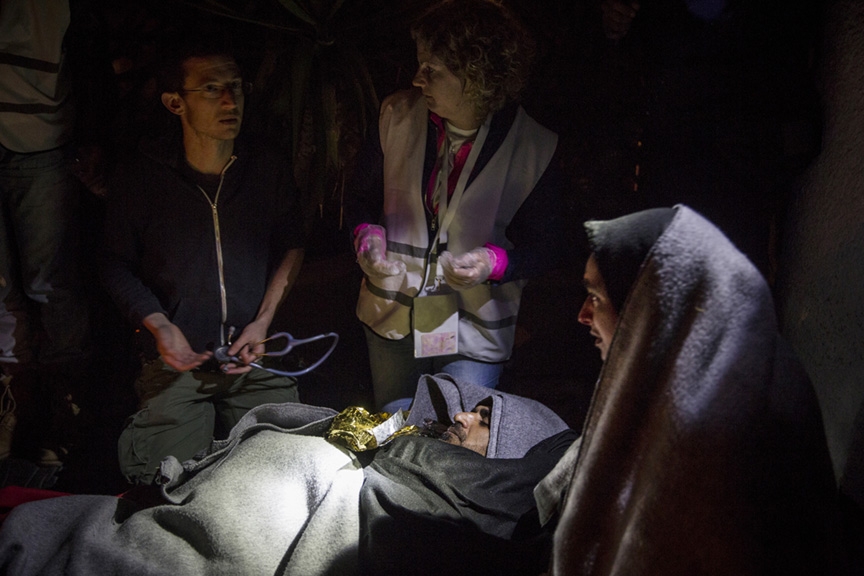 Volunteers and medical professionals attending to the survivors of a boat that sank while trying to cross from Turkey to Greece.

“But the ones where they don’t find the body or they’re not able to give a proper funeral, this is a wound that never heals.”

We moved to another part of the camp. An Afghan man, noticing that we only had one chair, brought one over for us. “He lost his child,” Efi explains. “Ten days ago. He drowned.”

I asked Efi what she felt about the photos of dead children in the media. She understands the need to make people aware of what’s going on but as a mother finds it hard to stomach. “A photographer, a friend of mine actually, took photos of three dead children, the children of the woman over there. It was shocking to see their bodies like that.”

On Tuesday, the mayor’s office said that a hospital has stepped forward to donate land adjacent to the cemetery to accommodate the need for more burial plots. That news means the refugees that Efi cares for can at least have some peace: If they choose to bury their loved ones on the island, they can do so. 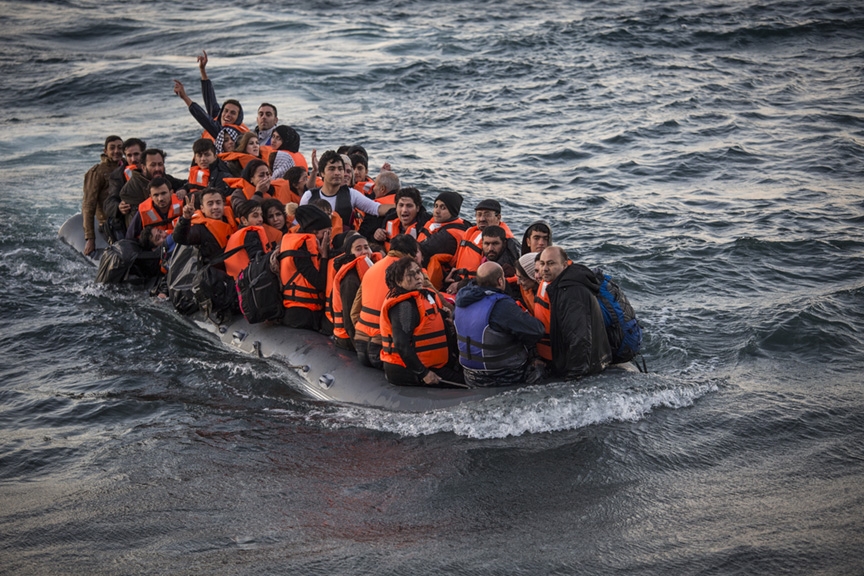 A boat full of approximately 50 refugees arriving in Lesbos.

But thousands of refugees pour into the island every day. October saw the highest number of arrivals in a single month — over 120,000 — and the most deaths. Weather and sea conditions will only get worse.

“We need a solution to stop this,” Effie said. “We don’t get used to it. We get angrier.”