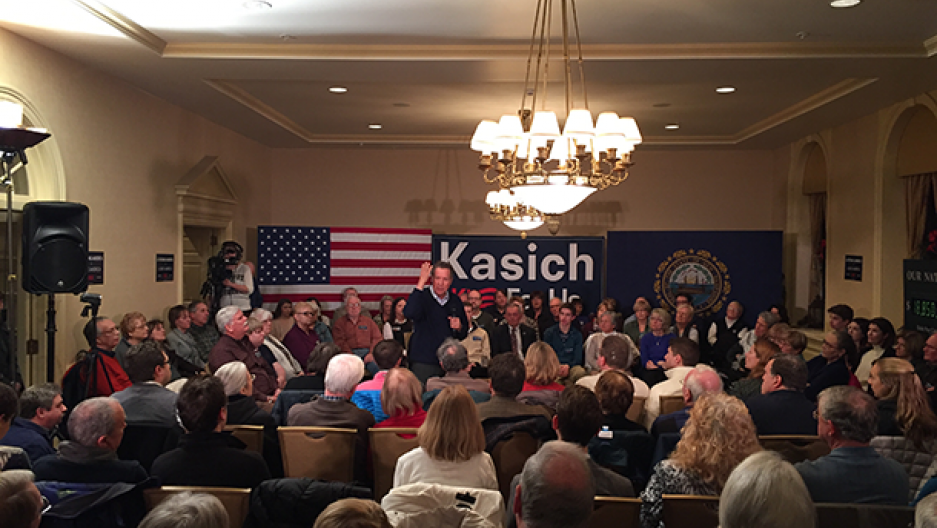 Ohio Governor John Kasich says he is concerned about climate change but is reluctant to go on the record to say exactly what he would do about it as president.

Only a couple of weeks remain before the nation’s first presidential primary election in New Hampshire and Republican candidates are campaigning heavily in a vital effort to sway voters. On the stump, they are fielding questions from voters about climate change and energy policy.

QUESTION: Governor, the next president of the United States is going to have to deal with the Paris climate accord. What would you do to implement or push back on that?

BUSH: I don't have the details of what the president committed to. He doesn't have the authority to do it. If he did, he would, once again, create a treaty which would be enforceable. ... Climate change in general is something that I think we all should be concerned about. The climate is changing. The good news is that our carbon footprint has actually been reduced by 10 percent in the last decade, is flat in the last 25 years, even though we have an increasing population. We should be proud of that.

And there are other things we can do as it relates to conservation and continued use of natural gas and things like that that would help in this regard. And ultimately, there will be renewables that will be more dominant than they are today. But to raise prices, to lose jobs, to deindustrialize the country, to create less economic activity, I don't think is the solution. So, where I diverge from the president's approach is most of his approach is going to create higher costs on consumers and higher costs on businesses and I don't think we need to do that.

Ohio Governor John Kasich had this to say at a campaign event:

QUESTION: I read that 75 percent of Americans acknowledge that climate change is real, and I'm just wondering, with the same scientific consensus behind climate change as evolution and gravity, why do you think lots of Republicans deny this basic science?

KASICH: I have an opinion why they do that, but I'm not going to tell you because it's not good. ... I can't tell you how they think, but I can tell you what I think. I think that human beings do affect the climate. And I'm a big supporter of solar and wind and geothermal and efficiency, but I want all of the different sources. I saw Seabrook today ... I'm for nuclear too. I mean, I'm for all of this.

I think there is something to climate change, but I think we have to take our time to have remedies, and the remedies are things like efficiency and solar and wind. And I think the other part of it is, let's not go so fast that we throw this kid out of work or this gentleman out of work. It's got to be a balance between a good environment and economic growth, which we can achieve. If we work at it, you can achieve it. You don't want to worship the environment, but we have an obligation to protect it.

I've had a little battle with my legislature over the issue of renewables. They tend to think it's subsidized, it's a government program and all that. Well, you know what? We have to develop these things. So I just have a little different view of what we should do in that area, and we have to be careful about it.

Senator Marco Rubio was more voluble on the subject:

QUESTION: 80 percent of wind energy in the country is installed in Republican represented districts and it's creating jobs right now for people across the country where the economy is struggling. What will you do to make sure there are more clean energy jobs and more clean energy leaders here in America?

I'm not going to interfere in the marketplace. The market's going to decide which one of these would do more than others. What we need to do is to make sure everything is fair, and we will. Under my tax plan, every business will be treated the same. All of these carve-outs that some energy sectors have gotten versus others, we'll get rid of all of them. Every company, every single energy company, every firm in America, for example, will have the exact same tax rate, a flat rate of 25 percent, not 35 percent, which is the highest combined corporate tax rate in the world…

We are going to create an even playing field, and then the rest is up to the private sector. The rest is up to the American innovator and the American investor and they're going to go out and create this opportunity. They're the ones that are going to go and create these jobs, and I believe if we do that, then we are going to lead the world in all of these energy resources. Because I want us to have a true, all-of-the-above strategy, the most diverse energy portfolio possible. And one does not have to come at the exclusion of another. We can do them all, and we will.

QUESTION: Senator, I'm a lifetime New Hampshire hunter. Do you know our moose population has shrunk dramatically in New Hampshire as our winters have shortened. The Gulf of Maine is warm, the cod population has diminished, and even your home state of Florida is under threat from the rising sea. We need to somehow cut carbon and reduce climate change. Would you help save our moose by working aggressively?

RUBIO: I’m all for saving the moose, but I'm not going to destroy our economy. Our president and others are asking us to pass laws that will do nothing to change any of the things you just mentioned. They admit it. They say, ‘These laws won't change anything, but it's a start.’ Meanwhile, China and India are burning as much coal as they can get their hands on and they're growing their economy rapidly.

Go ask the experts how many degrees of global warming will this bring down. ‘Oh, probably not much,’ [they say]. What will it do to the rising sea if we pass the law you want? ‘Well, nothing at least for 100 years,’ [they answer]. And then I ask the economists, ‘What will this do to our economy?’ ‘Oh, it will do harm.’

Struggling families that are already struggling to make ends meet, their utility bills could go up $50 a month. That may not be a lot of money to a billionaire in California, but to a single mom trying to raise kids, $50 a month is the difference between buying new shoes for them this month or not. It means America becomes a more expensive place in the world to do business.

Natural gas, by the way, is a clean source of energy. And all of these people were all for it. All these radical environmental groups were all for natural gas until we discovered natural gas in America. Now, they say you can't use it. Nuclear energy is carbon free, zero emission. You can't build a nuclear power plant in America. So, let's get real here about this. We're not going to destroy our economy.