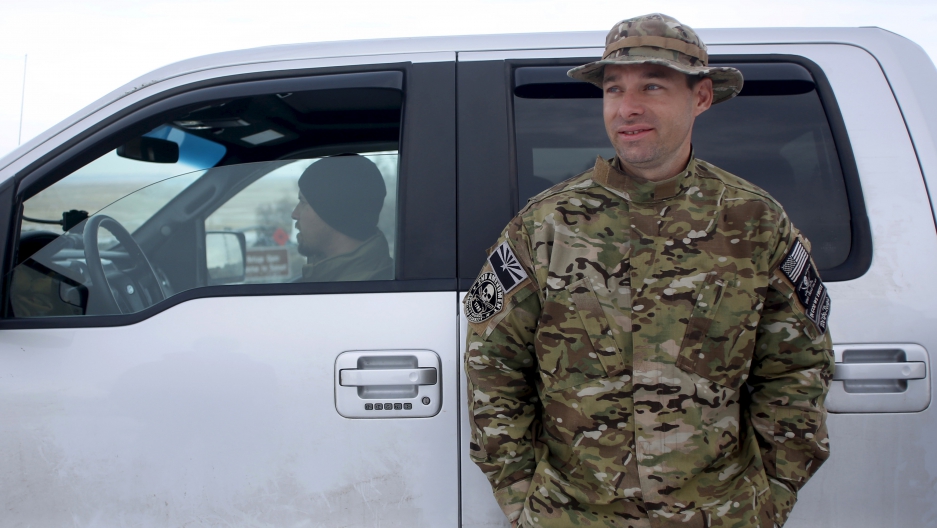 Militia members keep watch at the Malheur National Wildlife Refuge near Burns, Oregon, January 4, 2016. A group of self-styled militiamen occupied the headquarters of a U.S. wildlife refuge in eastern Oregon in a standoff with authorities, officials and local media reports said on Sunday, in the latest dispute over federal land use in the West.

Oregon authorities have two words for the armed men who took over federal buildings and land in rural Oregon: Go home.

In an afternoon news conference, Sheriff David Ward stressed that the reason the outside "militia" descended upon their community was already over: two ranchers had voluntarily turned themselves over to officials to begin serving a prison term for arson.

"It's time for you to leave our community, go home to your families and leave this community peacefully," the Harney County sheriff said.

"You said you were here to help the citizens of Harney County," the sheriff said. "That help ended when that protest became an armed occupation."

The armed group, led by Ammon Bundy — the son of anti-government activist Cliven Bundy, who has his own standoff with government officials in 2014 — says it is protesting federal land use policies, including the arson conviction of two the ranchers in Harney County.

Bundy's group says it has dozens of armed men — more than 100 — and food to outlast a long siege. But journalists who have visited the site of the standoff, the headquarters building at the US Fish and Wildlife Service's Malheur National Wildlife Refuge, have reported seeing significantly fewer people, and just a small amount of supplies.

Still, local, state and federal law enforcement have taken a low-key approach to resolving the conflict, acknowledging it, saying they're monitoring the situation but not taking any overt actions to arrest or evict the militia.

For their part, the militia have vowed to resist any law enforcement intervention with force.

Amelia Templeton, a reporter for Oregon Public Broadcasting who has been to the refuge, said local residents are still trying to figure out what's going on — and form an opinion on who's in the right.

Templeton emphasized that this is a remote part of the state — and this particular wildlife refuge is often deserted at this time of year. Outside the refuge, there are a handful of ranches in any direction, but not much else.

"Many people here relate to the concerns that Ammon Bundy has raised about things like federal overreach or the inability of ranchers or loggers to access federal lands in the way they did in the '70s and '80s," she explained. "That said, I have heard from a lot of people, 'we don't think they're doing this the right way.' Or, 'this isn't the way you go about these things.'"