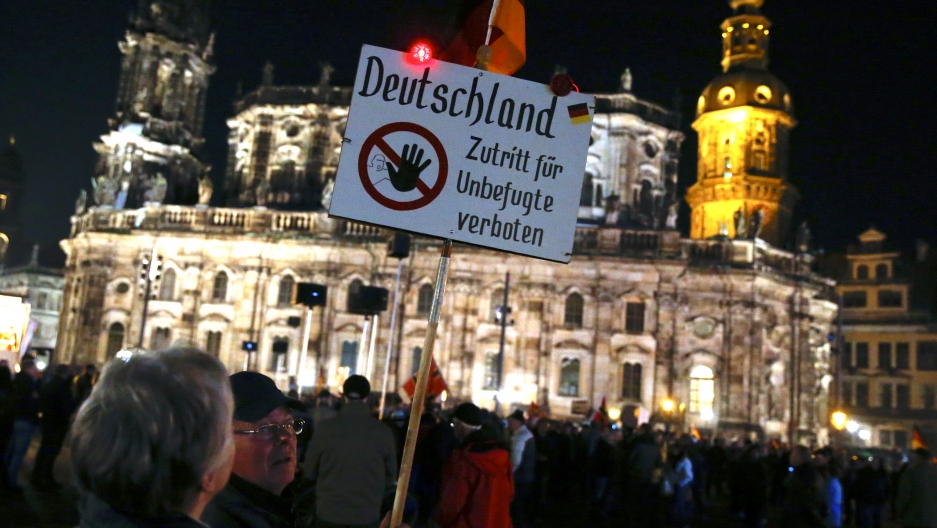 An elderly man attending one of the weekly Pegida protests in Dresden carries a sign reading, "Germany - Off limits to unauthorized,” on October 26, 2015.

Many observers thought the far-right protest movement that emerged from the former East German city of Dresden a little more than a year ago would steadily fade away into oblivion.

But the refugee crisis that started to unfold in Europe this summer, along with the horrific terrorist attacks in Paris last month, helped put some wind in the political sails of Germany’s far-right. And experts now say Pegida might be here to stay.

A recent Pegida rally held on the plaza in front of Dresden’s regal state opera house was well attended. Several thousand people showed up in rain jackets to listen to speakers rail against Islam and Muslim immigration. The name Pegida stands for Patriotic Europeans Against the Islamization of the West.

“The European heritage is the envy of the world,” one speaker told the crowd in English. “It is too precious to see it destroyed right before our eyes in our lifetime.”

Dieter Tartz, a middle-aged Dresden native who’s been going to Pegida rallies since they began, said, “We didn't take to the streets in 1989 for this to happen.”

“In Germany today, most big German cities now have parallel societies where foreign immigrants are the majority in certain areas. We don't want this. And we're going to say so loudly.”

Another Dresdener, 65-year-old Veronika Noack, said she too is proud that people in this city were among the first to challenge the Soviet-backed East German regime 25 years ago. Noack said she has concerns about immigration, so she started attending the Pegida rallies early on. But she said that she has since stopped going to the weekly protests.

“They've become too radical,” Noack said. “Some of the protestors go too far. They use vulgar language and they accuse German politicians of being traitors who need to be dealt with. That's just too extreme."

But immigration, she went on to say, especially the large numbers of Muslims coming to Germany, is a big worry for her.

Political scientist Werner Patzelt of Technical University of Dresden said the rise of the far-right is evident in the recent Alternative for Germany Party. The AFD, as it’s known, is the closest thing Pegida supporters have to a real political party on the national and state level.

"The AFD has climbed to numbers like 10, 11 percent, depending on the polling institute. And presumably, the AFD will make it into the state parliaments of Rheinland-Pfalz and of Saxon-Anhalt during the next election, so this is a success," Patzelt said.

Something else that worries Patzelt, he said, is the rise in violent attacks against refugee camps and the homes of asylum seekers. He sees the Pegida, which calls itself a non-violent movement, as a catalyst for this troubling trend.

"We are losing the liberal character of our society,” Patzlet said. “We create a climate of mutual distrust, of polarization, and this is so detrimental for our democracy.”

“It is hard to understand why the political class of this country is leading [Germany], consciously, into such a direction."

What's missing, Patzelt and others say, is a serious political discussion at the highest levels about Germany's controversial immigration and asylum policies. It's just not happening and until it does, he explained, the more extreme elements of the political far-right in Germany will fill the void.

Ahead of the Pegida rally, I asked supporter Dieter Tartz if the protest movement is a little like the candidacy of Donald Trump, who promises to "Make America Great Again."

“We only want to preserve Germany and to keep it the way it is.”