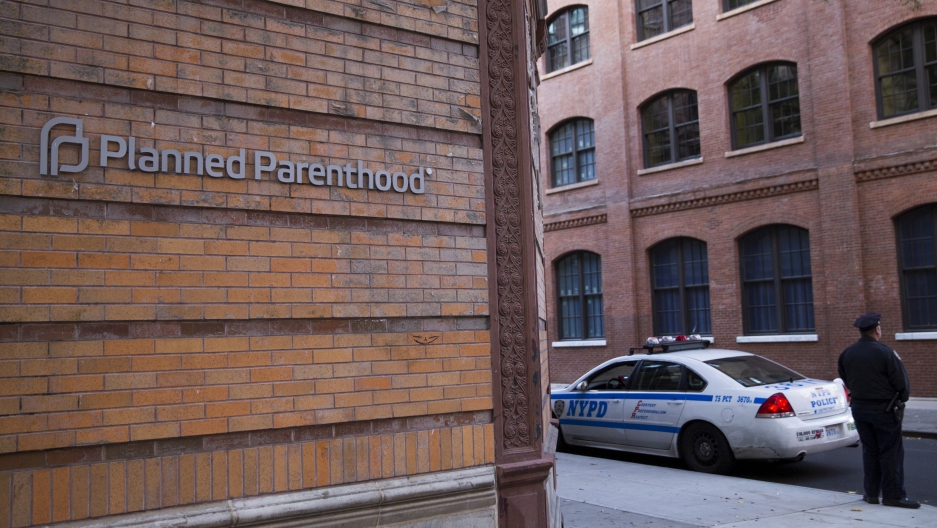 A member of the New York Police Department stands outside a Planned Parenthood clinic in the Manhattan borough of New York, November 28, 2015.

The clinic had been closed for nearly six weeks after a hatchet attack by a juvenile. Law enforcement officials are still trying to determine if the same young man also spray-painted "murderer" on the clinic's facade earlier that month, in October.

The New Hampshire assault happened just a few weeks after a clinic in Pullman, Washington, was set on fire in early September. A clinic in Thousand Oaks, California, suffered a similar attack later that same month.

According to the 1994 Freedom of Access to Clinic Entrances (FACE) Act, it's a federal crime to interfere, injure or intimidate anyone who seeks to access reproductive healthcare. The FBI has seen an uptick in crime associated with women's health clinics since the 2009 murder of Dr. George Tiller, an provider in Kansas.

In light of such violence, how do federal officials work with law enforcement agencies and clinics to assess threats and prevent attacks across the United States?

“There is a long history of attacks on abortion clinics and other women’s health centers,” says Michael German, a former FBI special agent and a fellow at the Brennan Center. “It’s certainly acknowledged that this is a group of targets that are out there. Fortunately, the numbers are still very low compared with general violence throughout the United States of America.”

According to data from the National Abortion Federation, there have been 17 attempted murders, 42 bombings, 182 cases of arson and more than 420 death threats made against abortion providers since 1977.

Since July 2015, the federation found that there have been five arsons at reproductive health clinics in the United States. The same month, the Center for Medical Progress, an anti-abortion group, released a video that purported to show a Planned Parenthood official attempting to sell fetal tissue. An analysis by a private research company found that the videos were altered.

The videos, German says, appear to be connected to the recent the uptick in violence against abortion providers, including this week’s shooting in Colorado.

“What we have seen, according to the FBI, is that there is an increase in incidents at abortion clinics since the videos were produced,” he says. “That’s some important data to consider. But I think what we also have to keep in mind is that millions of people saw these videos and millions of people have anti-abortion views. The fact that a handful of people act out doesn’t mean there’s a direct connection from the activism to the terrorism.”

Despite those stats, German says counter-terrorism efforts in the United States are largely focused on foreign threats and radical Islam.

“We know from data that violence from the far-right usually claims more victims than any other type of terrorism, but somehow we don’t react to it in the same way,” he says. “Part of the problem is there has been government-funded research on terrorism that is just awful—it doesn’t stand up to scholarly standards and it doesn’t use empirical evidence. That false information is out there misleading not just the public, but also policy makers and actual security individuals about the nature of the threats that are out there.”

The US government intensely tracks those believed to be or at risk of engaging in radical jihadism. But, even in the face of decades of violence against women’s health clinics, German says there is currently no coordinated attempt to track individuals that may commit crimes at reproductive health centers.

“It’s amazing,” he says. “Around 2004-2005 the FBI started making public declarations that environmental terrorism was the number one domestic threat, even though there had been no loss of life regarding any incidences of environmental terrorism. Somehow this violence on the far-right was treated as not as serious. I think it is a problem, and part of the problem is there isn’t objective data collection. Once we have objective data we can make better decisions about where our resources should be devoted.”