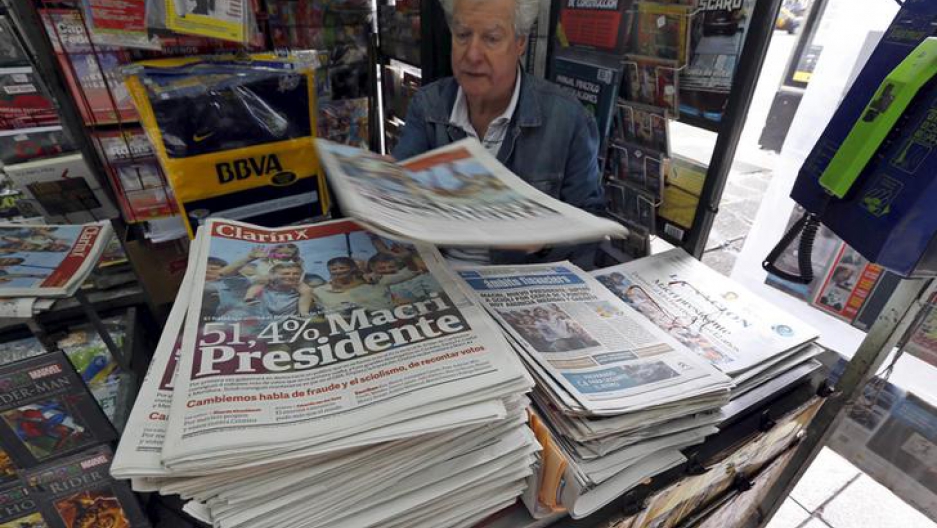 A man sells newspapers printed with the frontpage image of Argentina's president-elect Mauricio Macri in Buenos Aires, November 23, 2015. The conservative opposition challenger Macri scraped to victory in the presidential election, ending more than a decade of rule under the Peronist movement. The newspaper reads "51.4% Macri President"

Candidate Mauricio Macri had promised to revitalize Argentina’s rather sagging economy. And that apparently sounded good to voters who went to the polls Sunday in the country’s presidential run-off election.

Term limits prevented ncumbent President Cristina Fernandez de Kirchner from standing for re-election, but the candidate she was favoring from her ruling party, Daniel Scioli, was beaten solidly. Macri got 51.4 percent of the vote compared to 48.6 percent for Scioli. Macri's victory hits Argentina like a political tidal wave, and it explains why Macri declared that "today is an historic day."

“This is a historic change,” says BBC Mundo reporter Veronica Smink in Buenos Aires. “Not only because Macri has won but also because his political party, Cambiemos, also won the province of Buenos Aires, the most populated province of Argentina and the city of  Buenos Aires. This is something unprecedented.”

It’s early days yet to speculate on how the political sea change is going to affect things for ordinary Argentines on the street, but Smink says optimism seems to outweigh anxiety about the future.

“This is a complete difference for Argentines because it is the first time that a party that was created in 2003, in the 21st-century, is going to rule the country. So even though there is worry about the economic situation and how Macri will handle it, I think the sense on the street is that there is a hope that whatever happens, it will be something different to what was happening before. Voters feel a lot of hope.”

But hope will not be enough to tackle the significant the economic hurdles now facing the country, Smink adds.

“The economy has basically been paralyzed for the past four years due to many reasons, some of them external and some of them having to do with the economic policies that the Kirchener government has taken," she says. "Basically Argentina has a massive problem of inflation above 25 percent. This has been going on for years — the Central Bank reserves are extremely low, there has been almost no jobs created in the private sector on the past four years, and many of the local economies especially in rural areas are completely paralyzed.”

So the mission impossible for Macri, should he accept it, is to find a way out of the situation without causing a massive disruption, and without sending a lot of Argentines into poverty.

Another thing to be hopeful about is that in all likelihood, US-Argentine relations are expected to change for the better.