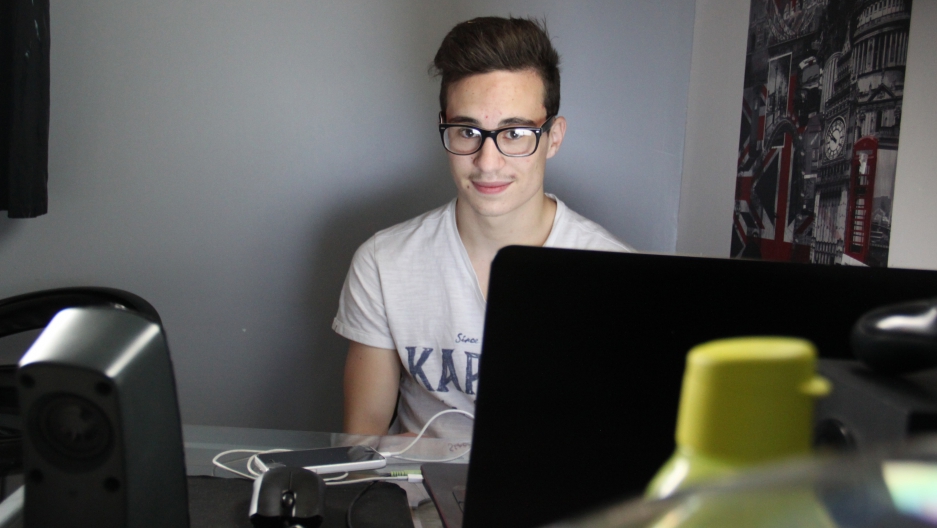 Steve Puget, 18, started a Facebook page to help people in Paris find missing friends and relatives after the attacks. In some cases, he had to break the news that a loved one had been killed.

A day after the Paris attacks, Steve Puget decided to help find people searching for their loved ones who had gone missing.

He opened a Facebook page he called Recherche Paris, or “Search Paris.” His first post went like this: “If you’re looking for someone who was in Paris last night, send a description and the place where that person was.”

When he woke up the next morning, the page had about 400 likes, and people started writing messages asking for help finding their loved ones.

But Steve was in no real position to go out and find them. He’s 18. And he does not live in Paris; he lives 250 miles south, in the middle of the country, in the town of Laiz. Population: a bit more than 1,000.

An hour and a half from Paris on the fast train, past rolling green farmland, is the small city of Macon. From there, it’s a 15-minute drive past fields of cows to Laiz.

Steve waits in the parking lot of the Super U supermarket, wearing jeans rolled up at the cuffs, and the faint trace of a teenage mustache. We walk to his house, about five minutes away.

He takes me and my translator up to his bedroom, which has posters and a with a New York City taxi theme. His room is tidy; I wonder if his mom made him make the bed before journalists arrived.

She knocks on the door and peeks her head in. “Bonjour!” she said. Then she shut the door on her way out.

When I ask if that was embarrassing, Steve says, “She does that all the time.”

It does not occur to Steve that it would be difficult to find missing people from his bedroom in Laiz, hundreds of miles from Paris, where the attacks took place.

“It’s not just Paris being attacked. It’s the whole France,” he says. “It’s not about being far away or something. It’s the same country.”

Many of the dead and injured hadn’t been identified for days, and relatives and friends didn’t know if they were dead or alive, or which hospital they might be in. Steve and his high school buddy, Nicolas Defait, fielded hundreds of Facebook messages.

“The first message we received was on Sunday morning. It’s a woman named Caroll who sends a picture of her friend.

“She wrote, ‘I am looking for my friend Cédric. He was at the Bataclan. People from the police took him away. He was injured in the face. Here is his picture. Please help me.’”

Steve shared it on his Facebook page, and others shared the post. Meanwhile, Nicolas called a bunch of hospitals in Paris. He had a list of names of missing. But the hospitals were totally overwhelmed; no one on the other end of the line was much of a help.

But Steve and Nicolas kept receiving Facebook messages. So they did what they could do: they posted the names and photos of the missing. Hundreds of people would share the Facebook posts, spreading the word.

Sometimes someone would write in to say, hey, so-and-so is my friend, and she’s alive. Steve and Nicolas would then write back to the person looking for her to share the good news. Sometimes, someone would post the news from a news site of a missing person’s death. That’s how the news came in that Cédric Gomet, whom Caroll had been looking for, had died.

“Every story was moving, and we felt like we were part of their families…so it was always difficult,” Steve says.

Steve didn’t gather the information himself, but he was often the one who broke the sad news to the person who wrote in looking for a missing loved one.

No one prepared Steve to do this. He’s just a senior in high school who runs a few video game forums on the Internet and is studying in a technical track at school studying to be an electrician. He is a teen of few words.

When it was bad news he had to share, Steve would type out the same line to everybody: “Our condolences to you and the family.”

All the missing have now been accounted for — except for one. A young guy who wrote a note online saying he was looking for a young girl who stalled him from taking a bus to an area that was attacked. He felt he owed her his life.

It was the kind of missed connection post you’d find on Craigslist.

Steve and Nicolas shared the note on their Facebook page. The guy is still looking for the girl.

Steve’s mom, by the way, said she’s really proud of her son for what he’s done.