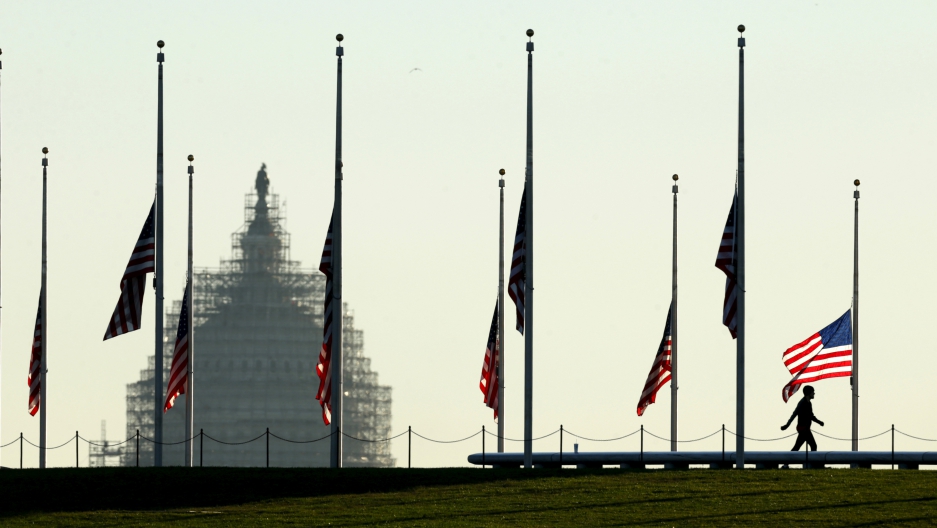 The dome of the US Capitol is seen as a man walks past flags flying at half staff at the Washington Monument on the National Mall in Washington November 16, 2015.

Of the various ways of getting into the United States, applying for political refugee status is hardly the easiest.

Since 2012, there have been 1,854 Syrian refugees admitted to the US. President Barack Obama has said that we will take in an additional 10,000 in fiscal year 2016, likely now with increased vetting and background checks after more than 30 governors have said they would reject refugees in their states.

While the refugee debate continues both in Washington and at the state level, 20 million people traveled to the US in fiscal year 2013 under the Visa Waiver Program — a program that allows citizens of 38 approved countries, mostly Western allies and Japan, to travel here for tourism or business for up to 90 days without having to obtain a visa.

The Belgian and French citizens who were involved in the Paris attacks could have, in theory, been able to travel to the US under the Visa Waiver Program.

The Congressional reaction gives a clue into how Washington works in crisis mode.

"I mean, there was just overwhelming outcry from my district,” said GOP Rep. Dave Brat. “The folks want action now.”

And action is what they got. On the House floor Thursday, representatives passed a bill that would suspend the Syrian refugee program. It passed 289-137, with the support of 242 Republicans and 47 Democrats.

That prompted protests from Democrats, including President Obama, who said refugees were being vilified, and that they already undergo checks that take up to two years.

Republican Rep. Mike McCaul, the chair of the Homeland Security Committee who introduced the House bill to halt the refugee program, stressed that speed is critical and that lawmakers wanted to pass a bill before going home for Thanksgiving.

"The threat's real,” said McCaul. “ISIS has said they want to exploit it to infiltrate the West. It's not a threat I'm making up. It's a threat the administration’s own officials have warned us about."

There is indeed speculation that at least one of the ISIS terrorists in Paris entered Europe posing as a refugee. But even before McCaul introduced the bill earlier this week, many lawmakers on both sides of the aisle admitted they didn't really think the refugee program posed a major national security threat.

“Were I in Europe already and I wanted to go to the United States, and I was not on a watch list or a no-fly list, the likelihood is that I would use the Visa Waiver Program before I would try to pawn myself off as a refugee and try to enter under false documents," he says.

Compared to the 10,000 proposed to be admitted by the refugee program, the tens of millions of people entering the US from Europe with the Visa Waiver Program is a flood. And that’s largely by design. Ease of travel is vital to business and tourism — commerce worth billions of dollars a year to the economy.

Republicans like McCaul say they're also in favor of tightening up visa waivers. There's momentum building for possible reforms in early December. But the program is complex, with powerful stakeholders.

But it’s also how the bill works that tells you a lot.

McCaul's bill is rather straightforward. It requires the FBI and other top security chiefs to ramp up vetting of refugees headed for the US. But it doesn't tell the agencies how to increase security, nor does it give them more money.

The bill essentially only does one important thing: It says that it is entirely up to the intelligence chiefs to personally certify that each and every refugee cleared for entry is not a threat. The result is that politicians will have effectively put the responsibility entirely on the intelligence community.

"That's why it's important that we have all three, one representing intel community, one FBI, the other Homeland Security signing off,” said McCaul, “Assuring the Congress and the American people that they do not poet a threat to the United States."

Homeland Security Secretary Jeh Johnson is one of the people who would have to personally certify each refugee — 30 per day, at least.

"To personally certify, with respect to 30 people a day,” Jeh said, “that certain requirements have been met is hugely cumbersome and I don't think the American people will think that is the best and wisest use for the Secretary of Homeland Security to be spending his time."

McCaul was clear: he’s not out to waste Johnson’s time.

Instead, he wants to give him, FBI Director James Comey, and Director of National Intelligence James Clapper, direct political responsibility for the refugees, and clear culpability if anything goes wrong.

McCaul continued, "Because they will own it, and if they make a mistake it's their mistake.”