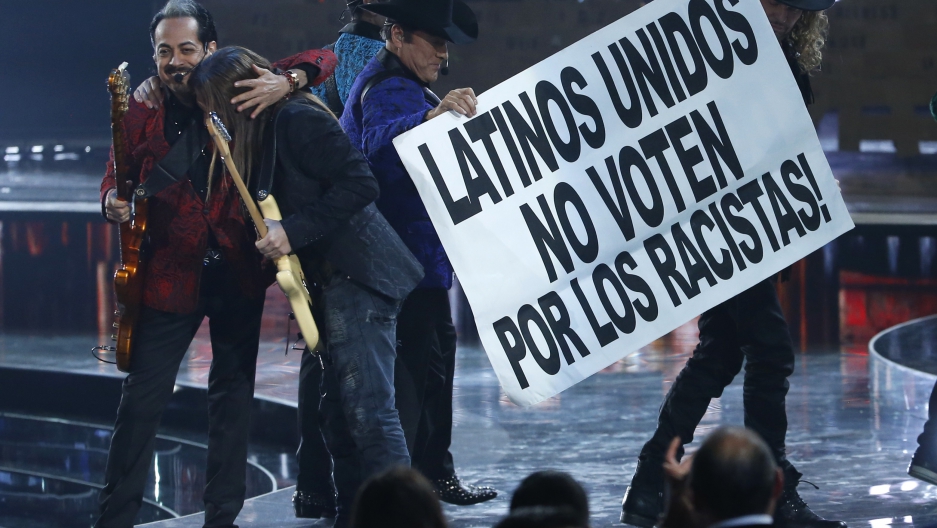 At the 16th annual Latin Grammys in Las Vegas last night, a song about political empowerment stole the spotlight.

"Their messages are all the same," warned the ad. "No to DAPA. No to DACA. No to immigrant families. Now it's time for our community to say no. We will not accept hate. We will not allow anti-immigrant attacks. We will not support the status quo."

Soon after, Mexican rock legend Maná won the award for best pop-rock album. As he accepted on stage, lead singer Fher Olvera — who has likened Donald Trump to Hitler in the past — took the opportunity to remind the millions of live viewers that the US is home to the second-largest Spanish speaking population in the world — led only by Mexico.

"This means that we must exercise our power and our right to vote," he said. "Register and vote for the best candidate. The candidate who gives Latinos the best opportunities."

Later, after a joint performance of the activist immigrant anthem "Somos Más Americanos" with outspoken godfathers of Norteño music Los Tigres Del Norte, the two groups unraveled a sign on the Grammys stage that read 'LATINOS UNITED DON'T VOTE FOR THE RACISTS.'

The gesture was the unofficial kick-off of Voto Latino's voter registry campaign, which borrows its title from the aforementioned song.

We are 54 million strong + we can't afford to stay quiet. Get out and vote, mi gente #SomosMas2016 #LatinGRAMMY https://t.co/DCdjQ9Tf4X

I think my next job will be working to get my Latino people registered to vote and informed. #SomosMasAmericanos https://t.co/Tl5etF4E9E