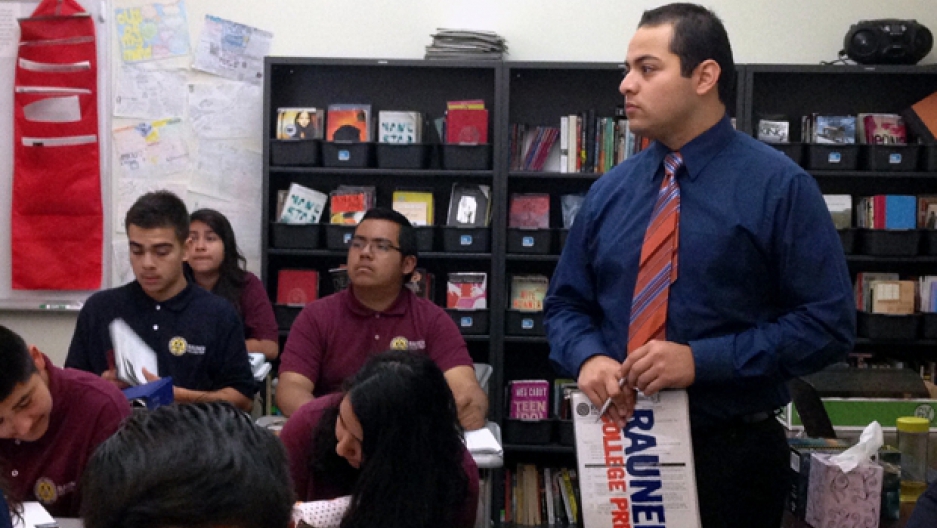 Jose Garcia on the first day of school in 2014.

Jose Garcia is in charge of music.

At this ceremony in May, the determination of this teacher — and his school — to get students into college is on full display. Instead of celebrating a few top athletes choosing where to play, his school treats every student heading to college like a star.

One by one, each graduating senior takes the mic, flanked by parents, and declares where he or she will graduate from college four years from now.

“My name is Manny Cardoza and I’ll be graduating from St. Olaf College,” says one student as he opens up a t-shirt emblazoned with the St. Olaf logo. Jose helped Manny with his applications. Manny ultimately was accepted into 11 colleges and got lots of scholarships.

Parents and families are dressed up, taking pictures, and cheering like it’s a Friday night championship football game in the heart of Texas. Except this is the near Northwest Side of Chicago — and all the players are low-income, students of color.

Jose hits play and the sound of the Chicago Bulls lineup music fills the auditorium. Teachers who advise seniors are announced as if they’re famous basketball players, by name and by the university they attended.

Standing to the side of the stage, Jose is taking official school photos as each student signs a “contract” that commits to Noble that they will finish college. After the ceremony is over, Jose chats with a teacher he’s known since he was 14.

“If I had to pick between this and graduation, it would be this, 100 percent,” Jake Lessem says. “I could watch it all night long.”

Related: Training America's next teachers: Sometimes they learn in the very schools where they'll teach

Lessem was Jose’s adviser when he was a student at Rauner. He’s the most veteran teacher here. A picture of the two at Denison’s graduation last May flashes on a screen behind them. Lessem tells Jose what he’s heard now from lots of other teachers.

“The only reason you survive your first year of teaching is you have no idea how hard it’s going to be until you’re already in the middle of it,” Lessem says.  “Because if anybody really told you, you probably wouldn’t sign up for it.”

Lessem cautions that teaching is never easy. If it feels that way, it’s probably time for Jose to find something else to do.

Jose never wanted to be a teacher. But he says he signed up to come back to teach because of what the school did for him. Tonight is a reminder of all that.

“It reminds me that I’m not here for me,” he says, choking back tears. “It's just… it's emotional… it's emotional because… it's about them, and their families.”

Walking away now would be the wrong thing to do, Jose says. He says this week he gave the sophomore students an end of the year survey and he was surprised by how many students wrote that they liked that, “Mr. Garcia didn’t give up on me.”

“I didn’t know the students were noticing,” Jose says, before being interrupted by a senior, who wanted to introduce him to her mom.

The school's principal, Mindy Sjoblom, says this is the moment when a teacher becomes a teacher.

“For some people, they set out do it and then they’re like, ‘Man, this is so hard’ and ‘Whoa, I don’t think I should be teaching,’” she says, noting that a few people she recruited for the program for new teachers had dropped out.

“It’s good for them to make that choice now. For most people, though, I think when you’re good at working with kids that kind of connection helps drive you through that mess and muddling that you have to do to figure out what works for you.”

Related: Training America's next teachers: A rookie teacher resists the urge to throw in the towel

Jose is still figuring out what works for him. It’s mid-June and the students have left for the summer, but there are still stacks of papers all over Jose’s desk and big cardboard boxes at the back of room 205, where he taught sophomore English since February.

He unexpectedly took responsibility for about 70 students and did the best he could. But he wasn’t sure if he was the best teacher for them.

“When I saw their scores… I was mad because we went over this so many times in class, “ Jose says. “Maybe I was a little too confident.”

Jose says he learned a lot.

“Don’t assume they remember what you did a day ago,” he laughs.

However, when all the results of a final assessment of students come through, Jose's students have actually done better than he thought. Most students did improve since the mid-year test.

But he’s now hyper-aware of those tests. Next year, Jose’s graduate school will require him to prove his students learned with him as their teacher. Noble and school districts all over the country use student test scores to measure teachers.

“I think tests are not an accurate reflection of what students know,”  jose says. “But I mean, that’s the game we have to play it. If students want to get into college they have to get a good ACT score, this is the game that we have to play. So I think I’m kind of learning how to play the game.”

Sjoblom says Jose wasn’t the only teacher-in-training who was disappointed with his student’s test scores. She’s taking a closer look at it for next year, because ultimately, the whole point of training their own teachers is to get more great teachers in front of students.

She says there are a lot of complicating factors for the first year because most of the prospective new teachers were not in full-time teaching jobs. Jose was in a weird situation. But she does believe he became a better teacher by having his own class.

“He wouldn’t have felt bad about those scores if he didn’t own it,” she says.

Jose says he’s not sure how long he’ll stay in teaching. He says teachers in Chicago fight an uphill battle and can only fight for so long. Plus, he’d like to work at a place like Denison someday, helping first generation college students adjust to campus life.

But this fall, Jose has been teaching two different classes. It’s a job that he feels fits with the whole reason he came back — college counseling a group of seniors for 90 minutes every day and teaching two sections of a brand new class to freshmen and sophomore students. It’s called Identity and Justice Studies.

“We have to decorate a little bit more,” he says, opening the door to room 300. “I was thinking, Sunday night, when I was cleaning my room [at home], I stumbled on my diploma frame from Denison. It’s still in the box and, I thought, maybe I would hang it in the classroom.”

This story is part of a series originally published by WBEZ. Reporter Becky Vevea spent the last year following Jose Garcia in his first year as a teacher. Read parts one and two.

Share your thoughts and ideas on Facebook at our Global Nation Exchange, on Twitter @globalnation, or contact us here. Is there a question you wanted answered in this story? Let reporter Becky Vevea know.