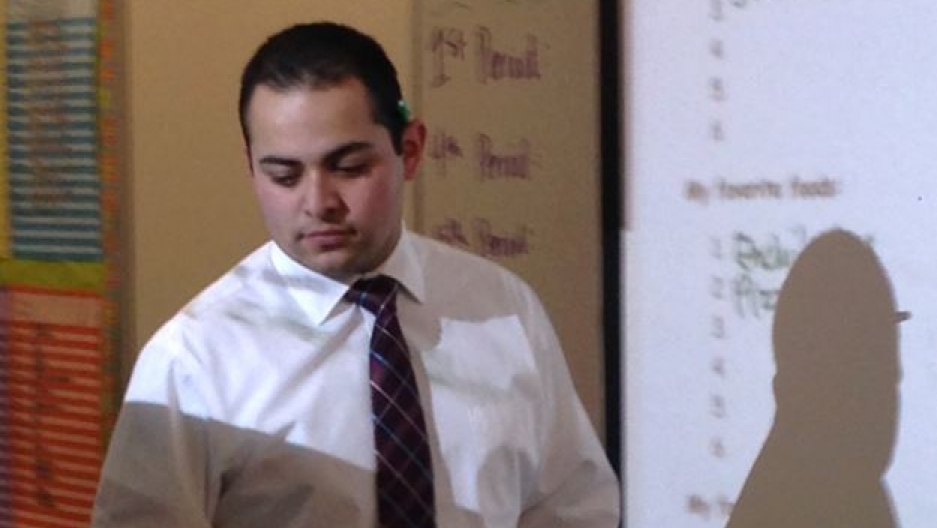 It’s the end of October — two months into the school year — and everything is due all at once and there are not enough hours in a day.

Jose is training to be a teacher at his old charter high school, Rauner College Prep, one of the 16 campuses of the Noble Street Network of Charter Schools in Chicago. This week, he has papers to grade and papers to write for graduate school. The seniors he’s helping with college applications are running behind, and on top of that, he is required to go to professional development with all Noble teachers on Friday.

Jose co-teaches a class with Tierionna Pinkston that’s required for all Noble seniors. It’s devoted to getting students into college. Jose took it five years ago, when he was a senior at Rauner College Prep.

“Ladies and gentleman, up here real quick,” he says over the chatter. “We also need this sheet back before you leave today.”

Students are supposed to be filling out a list of schools they’re interested in attending but most of them are just filling in the blanks. When the bell rings, kids rush out of the room and Jose scrambles to collect the sheets he told them to turn in.

Jose counts the papers in his hands after all the students are gone. He definitely did not get them all back.

Around 5 p.m., at the end of this long, frustrating day, he checks in with Pinkston. She asks what would help and Jose says, “Not being here.”

“I can’t help you with that,” Pinkston says, with a sympathetic laugh. “First year sucks. It sucks. I used to cry on my way home at night.”

“At least nobody’s called you a bitch, right?” she asks.

The two laugh, but earning the respect of teenagers is not a given.

Jose says he gets frustrated when kids don’t take school seriously. When they think it’s just a punishment. Like today, when a senior he’s been helping look for colleges filled out a bunch of random schools, without actually knowing what majors those schools offered or even where they were located.

But then he remembers when he was 17. Jose didn’t always understand why he had to do so much homework and take so many tests and keep his shirt tucked in all the time.

Pinkston can tell there’s something else bothering Jose. He hesitates, but then admits that he doesn’t really feel like a teacher. He kind of just feels like the assistant.

That could be a problem because he’s required to videotape himself teaching for his graduate school classes at Relay. He’s worried he won’t get enough practice before those assignments are due.

But by the end of November, Jose gets to lead Jillian McDonald’s Literature and Composition class from start to finish. He teaches a lesson on "The Diary of a Part-Time Indian" by Sherman Alexie.

And on this day, just before the Thanksgiving break, he does sound like a teacher.

Related: Training America's next teachers: Sometimes they learn in the very schools where they'll teach

“I think he’s come a long way,” McDonald says. “I think a lot of classroom management is being confident in what you’re asking them to do.”

Jose says he thinks he did well and made the right adjustments between classes.

This is the kind of stuff Relay wants Jose to pay close attention to, the little things others might miss.

As the freshman shuffle out of the room, he runs over to a small camcorder that’s been propped up on his desk in the back corner. He stops the recording. Tonight, he’ll spend a few hours writing up a short reflection and submitting it to Relay.  He’ll do at least a dozen reflections over the course of the year and he hopes it will prove that he knows what he’s doing. That he’s ready for his own classroom.

Being Mr. Garcia, five months ahead of schedule

By January, the rollercoaster of Jose’s first year in the classroom has had more downs than ups. He believed what he told the juniors in that first day assembly: he wanted to come back and show them they could make it, too.

“I went to bed at 2 a.m. yesterday, and I actually slept on my couch because if I were to lay down on my bed, I was not going to get up today,” he says. “It’s a recliner, so I laid down just a little bit, but not all the way. I didn’t get too comfortable.”

He’s cried, like Pinkston told him he would. He got a really bad grade on his latest assignment at Relay. And he’s averaging five hours of sleep a night.

This is when everything changes. When the reality of working in a school in 2015—charter or otherwise—blows a giant hole in all of Jose’s and Relay’s and Noble’s best laid plans.

A teacher at Rauner took an unexpected medical leave and the school needed a new sophomore English teacher.

Noble leaders designed Jose’s training program on the belief that teachers can be built and that they should be prepared like doctors, under the eye of experienced teachers for a full year. But now, they’re basically saying: That residency thing? We think that’s how you make a teacher… Until we need somebody to teach sophomore English.

Mindy Sjoblom, the dean of Relay in Chicago who recruited Jose, doesn’t see Jose’s premature move to teaching as a departure from the program’s design.

As a former principal, Sjoblom says those mid-year vacancies are “a principal’s worst nightmare.” It’s hard to find a good teacher in the middle of the school year, so if there’s a teacher training in your building, that’s probably one of the best options since they already know the school, the systems, the curriculum. In total, five teachers-in-training like Jose got pulled in to fill mid-year vacancies at Noble schools.

Overnight, Jose has become responsible for the education of about 70 sophomores.

‘What would happen if I just threw in the towel right now?’ 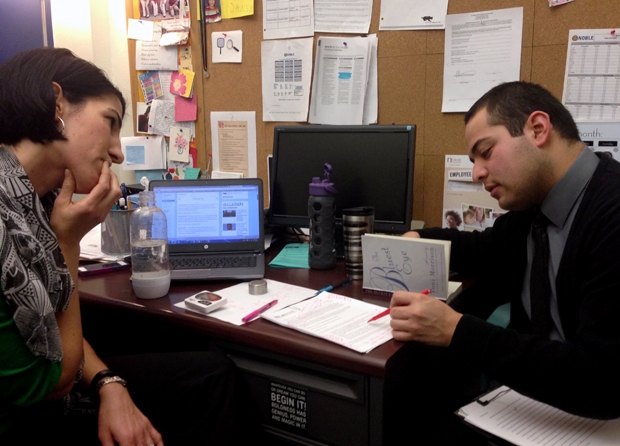 Jose meets almost every night with the other sophomore English teacher, Eric Stetzer, to go over lesson plans. Sjoblom comes to observe occasionally and when Jose has a question, he asks the school’s current Director of Curriculum and Instruction, Janna Walson. Her office is just down the hall from his new classroom.

It’s a feeling other teachers have warned him about.

This feeling is one that often drives new teachers, like Jose, away from the classroom for good. Every year, research estimates about half of all the new teachers in America will leave teaching. At Rauner, Jose says there are at least 10 teachers taking different jobs next school year.

Jose figures it’s the combination of long hours and mediocre pay that makes a lot of teachers leave. Most charter school teachers make less than unionized CPS teachers. And because Noble is paying for Jose’s graduate school, he makes even less: about $30,000, including benefits.

He says he’s not doing this for the money. But he’s not so sure anymore if he wants to stay in teaching. And, under Illinois’ new licensing rules, he may not be able to.

How an old GPA can get in a new teacher's way

“I won’t be licensed because my undergrad GPA is not where Illinois requires it,” Jose says.

The new requirements for getting a teaching license are complicated, but after all his time and effort, Jose will have a Master’s — but no official license.

The state made all of the changes after Jose was already halfway through college, after he almost dropped out. The rule says to be licensed through an alternative route, like Relay, Jose must have a 3.0. He says he finished at Denison with a cumulative GPA of 2.8.

There are a lot of people — politicians and activists — who believe Jose’s GPA has nothing to do with how good of a teacher he can be. That good teachers can be made and all the new requirements are going to push out teachers of color, like Jose. 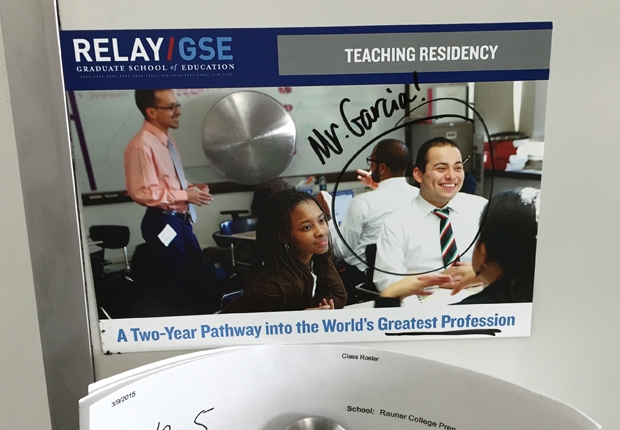 Jose is one of Noble’s success stories — the first in his family to go to college on a full-tuition scholarship, the obvious choice for Noble to recruit back to teach, and now working hard to be a good teacher for other low-income, students of color — and it’s still not enough to meet the state’s official requirements.

Mindy Sjoblom, Relay’s dean and a former Noble principal, says Jose is not alone and it’s been “heartbreaking” to see many of their own alumni locked out of the opportunity to become teachers in their schools.  Her next group of teachers in training will have just five Noble alumni. As of publication, one had already left the program.

Sjoblom, the head of Relay in Chicago, says she agrees with the intent of the rule—to get smart people into the profession—but she isn’t convinced the college GPA is the thing that matters. For one, it can never be changed.

Noble officials knew about this requirement and so did Jose.

They say they went ahead with training him, in part, because the state allows public charter schools to hire unlicensed teachers. Jose will be able to work at Noble, but his other teaching options are limited.

Jose says he did it anyway because he wasn’t sure how long he’d stay in teaching.

This story is part of a series originally published by WBEZ. Reporter Becky Vevea spent the last year following Jose Garcia in his first year as a teacher. You can read part one here.

Share your thoughts and ideas on Facebook at our Global Nation Exchange, on Twitter @globalnation, or contact us here. Is there a question you wanted answered in this story? Let reporter Becky Vevea know.