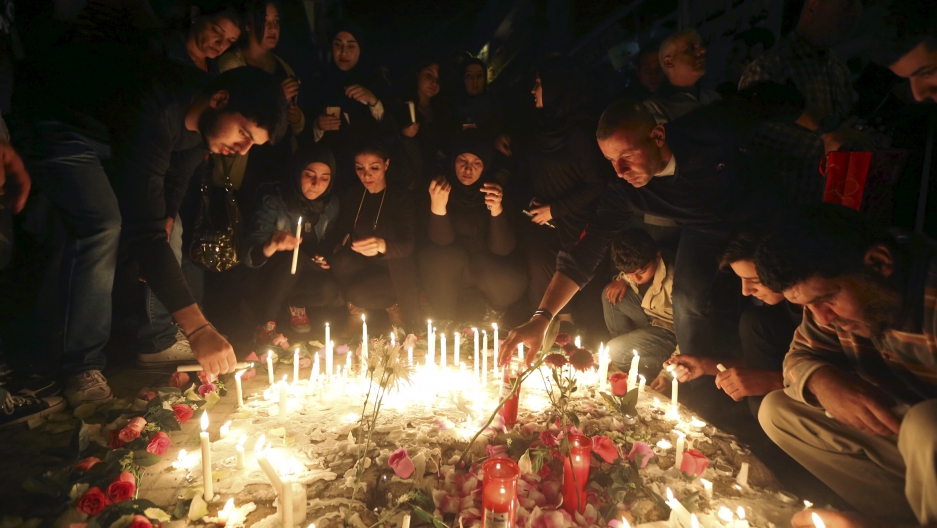 Beirut residents light candles during a vigil at the site of the two explosions that occurred on Thursday in the southern suburbs of the Lebanese capital Beirut,

Adel Termos, a Beirut resident out with his young daughter, witnessed a horrific bombing on Thursday. Then he made a split-second decision that saved countless lives.

As a second suicide bomber moved toward onlookers clustering at the scene of the explosion, Termos rushed the suspect.

"He tackled him to the ground, causing the second suicide bomber to detonate," says blogger and physician Elie Fares, who lives in Beirut. "There are many many families, hundreds of families probably, who owe their completeness to his sacrifice."

ISIS has claimed responsibility for the twin suicide bombings that took an estimated 45 lives, including Termos. More than 200 people were wounded. Among the survivors: his daughter, Fares says.

Daugher of Adel Termos who tackled a suicide bomber in Beirut, killing himself but saving the lives of hundreds. pic.twitter.com/cJJUyfAkE0

He leaves behind his wife, Bassima, 6-year-old daughter, Malak, and 2-year-old son, Akram.

Bassima Termos told CNN on Monday: “The kids and I are all doing fine. He made us proud, put our heads up high, what more do I need? He gave me dignity, pride, and respect."

Fares says when similar bombings occurred in Beirut in years past, Lebanese were quick to view the events through the prism of sectarian politics.

"The street is still divided by political and sectarian lines, but this time around the sense is that these are people, period," Fares says. "They're dead because of something they had absolutely no role in ... They died because of some demented, twisted politics."

Fares says it would be wrong to call the victims martyrs.

The two blasts hit during the evening rush hour, and devastated a commercial strip of southern Beirut.

Lebanon shares a border with Syria and hosts more than one million refugees from throughout the region.

How she deals with hate: She's donating $1 to UNICEF for every hate tweet she gets

Is there a double standard in the world's reaction to Paris, Beirut attacks?