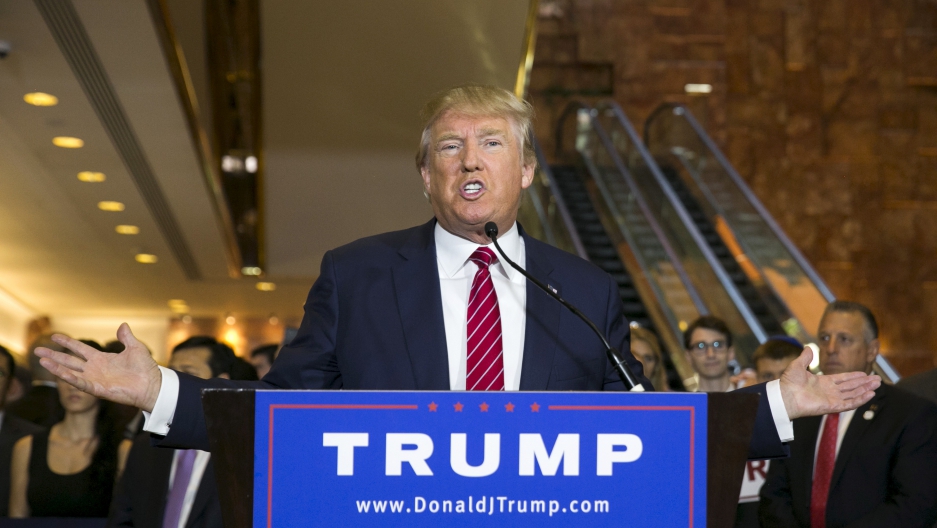 US presidential hopeful Donald Trump speaks during a press availability at Trump Tower in New York City on September 3, 2015.

Donald Trump's vision for US foreign policy is pretty straightforward: Trump will make America great again, and the rest of the world just needs to deal with it.

The candidate explained why the central theme of his campaign is resonating with voters during a recent interview with David Rennie, Washington bureau chief for The Economist.

“It’s a concept of greatness for this country. They are tired of being ripped off by every single country that does business with us. Whether it’s China, Japan, Mexico, Vietnam, [or] ... Japan,” Trump said.

In Trump’s view, the people running Washington right now are all talk and no action. Whether it’s about confronting ISIS, signing international trade agreements or taking care of American veterans, the surprise frontrunner in the Republican primary race said the political elites currently running the country are “grossly incompetent.”

“I actually think this election is going to be about competence. I’m a very competent person,” Trump told Rennie.

At its core, Rennie says Trump’s foreign policy is characterized by old-fashioned isolationism.

Beyond the old trope of political hawks versus doves, Rennie says, “What [Trump’s] showing is that there’s another very ancient tradition in America, which is the desire to be such a strong and powerful country that the rest of world certainly does not challenge you.”

Trump likes to say, “I’m the most militaristic person.”

But Rennie adds that, “he doesn’t actually ever want to use [the military].”

Rennie asked Trump what he would do about the Chinese creating new military bases in disputed parts of the South China Sea, for instance. Trump answered, “It’s a hostile move. And I would be talking to them very seriously about it. However, it is very far away, and we have a lot of problems, OK? And they’re already built.”

There would be exceptions, however, for US foreign policy under the leadership of President Trump. He told The Economist that while he was on record opposing the American-led invasion of Iraq in 2003, he would not hesitate to deploy US troops to seize the oil fields in Iraq and Syria.

Trump said the only nation-building effort he is interested in is right here in the United States of America.

“We’re spending all of our money nation-building in other places and they don’t even want us, OK?” Trump said to Rennie in a 42-minute phone interview.

As commander-in-chief, Trump said he would expect more from US allies. They would have to take far greater responsibility for their own national security problems if he became president.

As for China, Trump said he would play hardball with Beijing on trade. He accused China of devaluing its currency and said he would hit the Chinese with import tariffs of up to 12 percent.

The editors at The Economist looked at the overall implications of Trump’s policy ideas and were less than impressed.

"Americans are waking up to the possibility that a man whose hobby is naming things after himself might — conceivably — be the nominee of the party of Lincoln and Reagan. It is worth spelling out why that would be a terrible thing," they write in the latest issue of the magazine.

“From an economics point-of-view, we think that if he did one-tenth of what he’s planning, he would trigger a global trade war, which would cause a kind of global recession and cost lots of jobs,” Rennie says.