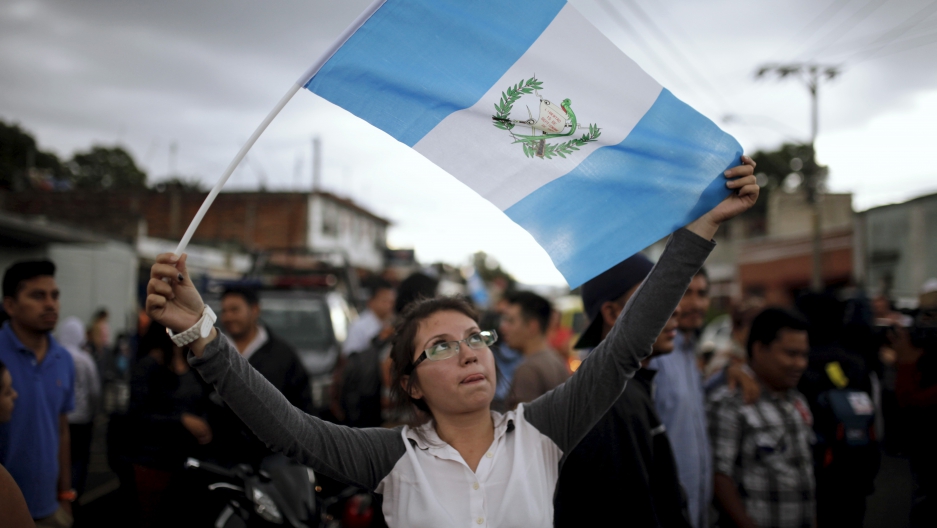 A woman holds a Guatemalan flag and celebrates as Guatemala's former President Otto Perez arrives at Matamoros Army Base, after a hearing at the Supreme Court of Justice, in Guatemala City, September 3, 2015.

Andrea Ixchíu received the news in a flood of text messages on Thursday afternoon. It had taken roughly 19 consecutive weeks of protest, a highway blockade and a national strike, but they had done it: President Otto Pérez Molina had resigned.

For the 26-year-old indigenous rights activist and independent journalist, the defining moment had happened the day before, when the Guatemlan Congress voted to strip Molina of his immunity, paving the way for him to face charges for his alleged role in a corruption network in which business executives paid bribes to avoid paying import taxes. Several officials had already been arrested for their part in the “La Línea” scandal. Molina’s vice president, Roxana Baldetti, stepped down in May and is currently in jail. Now a judge has ordered Pérez Molina to jail as well.

Ixchíu was there for the decisive vote.

“There were hundreds of people outside the parliament and people were screaming," she says. "People were shouting in the streets. Some of them started to cry and start hugging each other, and screaming, 'We won! We did it. That’s a victory of all of us. The people united will never be defeated!'"

Ixchíu says she also saw a woman, in her 70s, running and hugging police officers. "She told them ‘This is for you too. Your work is to keep this building safe, but you are part of the people, part of the pueblo,'" Ixhíu says. "It was really strong. You can see a lot of solidarity, and people feeling that we can do something when we get united. That’s really powerful. Especially in a country that was really divided by the war."

But it wasn’t long before the delirium had faded. Guatemala holds elections on Sunday. The leading candidate is Manuel Baldizón, from the Renewed Democratic Liberty (LIDER) party, which has been accused by a UN Commission of having ties to money laundering and drug traffickers. Baldizón himself wasn’t mentioned in the investigation, though he has faced accusations of campaign finance law violations.

“In a way this political party, LIDER, means the continuation of the corruption networks that are already in the country,” Ixchíu says. She and other activists are asking for the elections to be delayed. "We’re concerned," she says. "The system is not going to change just because Otto Pérez Molina is gone. The system has another new government this is going to be elected on Sunday.”

Ixchíu's pessimism about the election is widespread.

“Though there are approximately 12 different candidates. there are three principal candidates that are getting most of the votes,” says Guatemalan author David Unger. “And none of those three candidates are very attractive to the Guatemalan people. And this includes working people, middle class people and industrialists. So the question will be if these protests can continue to force the new elected leader who will take over January a process of greater transparency and honesty.”

As for Molina, he has long been controversial with indigenous rights activists like Ixchíu. In the early 80s, Pérez Molina was the commander of a unit in the Guatemalan army that waged a scorched earth campaign in a rural, predominantly indigenous area called the Ixil community. The worst atrocities were committed before he arrived, and Pérez Molina has never been charged. He has denied any wrongdoing, telling Reuters when he was elected that he was proud of his conduct during the war. But activists like Ixchíu have always believed that Pérez Molina was too high ranking not to have been involved.

“I was partying when we were protesting outside the parliament, but then the next day I started reflecting. Why is it easier to put a criminal in jail for robbing and not for being part of a genocidal structure? That’s a contradiction not just in Guatemalan society, but I think in all societies."

Still, Ixchíu believes that the months of protests and Pérez Molina’s resignation have fundamentally changed the political dynamic in her country. She and other activists who spoke with PRI don't think their movement is going to peter out just yet.

“At the beginning of this crisis we felt all the time worried, alert and all the time paranoid," she says. "Right now, we have started to learn to trust each other and that was something that the civil war killed. You didn’t trust anybody. But now I have seen how a lot of networks and organizations working together. It feels good. It feels like when you wake up from a nightmare.”

Jo-Marie Burt, a professor at George Mason University  and a researcher at the Washington Office on Latin America, shares a similar perspective.

“Guatemala has changed. I think it’s important to remember that Guatemala is a country that experienced 36 years of not only an internal conflict, but an internalized conflict that was defined primarily by state-sponsored terror," Burt says. "We’re almost at 20 years since the peace accords, but that undercurrent of fear is still very present in Guatemalan society. It is still very palpable."

Burt thinks that the protests in Guatemala this year, the toppling of a president, will encourage people to continue and demand more change. "It's not a one time deal," she says. "People are indignant. I don’t think it’s going to stop with the Pérez Molina question. There is a problem with the Guatemalan political system that needs to be addressed for there to be true democracy.”

The World's producer Bradley Campbell contributed reporting to this story.